Thank you to Allison Cagley (Friends of the Sacramento Arts) for her introduction of David Sobon. David presented Wide Open Walls, the mural projects across Sacramento. His enthusiastic presentation described the growth of the program with over 90 permanent installations in the last three years. David’s skills at development allowed Sacramento to bring in top talent and pay the artists for their work. We expect 50 artists painting 30 new mural locations in the coming year. David was quick to thank the Friends of the Arts Commission for the launch of Wide Open Walls. Visit Sacramento has been a valuable partner in growing the initiative. The Wide Open Walls (“WOW”) Mural festival in midtown Sacramento, features artists from around the world and continues to gain international acclaim. The WOW festival is from August 8th to August 18th and is a unique opportunity to watch artists create large scale works of art. 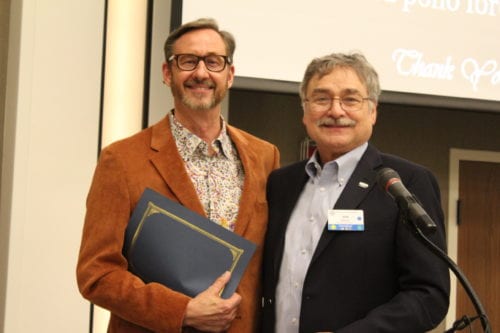 John Frisch (Newmark Knight Frank) provided an outstanding pitch for Rotary members to support Rotary members through business. The historical perspective that he provided demonstrated the sound roots that Rotary planted. He then discussed his own life history and how Rotary saved him in so many ways including timely Rotarian attorneys, insuring the uninsurable, surviving his divorce without having to sleep in his car. 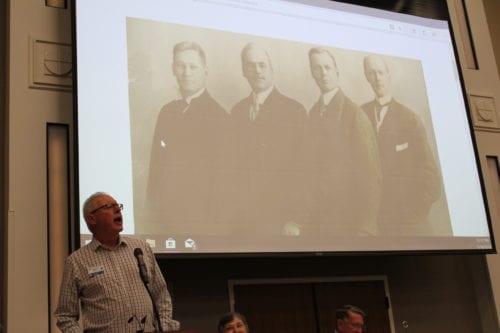 Elfrena Foord (Foord, Van Bruggen, & Pajak) presented the plaque that would remain on the Rotary Legacy Circle Immortals Banner to commemorate Denny Evans $10,000 gift from his estate plan. Elfrena described the background of the foundation and how legacy gifts from your estate plan to Rotary provides an opportunity to help our community by supporting the ideals of the Rotary Club of Sacramento. Please contact Elfrena if you would like to discuss a legacy gift to Rotary. John Wood (McGee & Thielen Insurance Brokers) successfully pinned the plaque after multiple attempts. 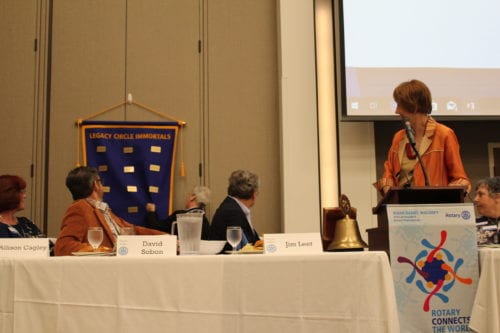 Dick Osen continued the inauguration of President Jim (Boutin Jones Inc.) with a slide show. High points to the show include Jim’s hair, mustache, hiking like a billy goat, mustache, Arden Little League, hiking like a billy goat, President Jim with his office portrait complete with his Rotary pin, and sitting at George “W’s” desk in his replica oval office.

Beverly Brautigam (Financial Advisor, Brautigam & Co.) announced that their annual BBQ and swim party will be held on Sunday, August 18, at 3 PM at their house. Families are welcome and there will be plenty of shade!

Todd Andrews (Andrews Construction) reminded everyone that the Sacramento Century ride will be on October 5, 2019. Todd stated that we need support marketing the ride from 7:30-11:30 on Saturdays on the bike trail at the fish hatchery, Arden Pond, Sac State, and all points between!

President Jim has renamed ‘contribution time’ to “Let’s Go on A Journey” to complement his joy of hiking. The new categories are:

Dick Osen provided a detailed description of the F4B rocket test in honor of the Apollo 11 mission. Some key points from his presentation included 19 tests being conducted in Sacramento and a custom airplane called the “Guppy”. The Guppy brought the engine from Southern California to Sacramento, Dick worked on this project while going to law school at the same time ($250). Todd Andrews provided a great picture show of his travels in Madrid in which he was wearing the Sacramento Century gear as a visiting Rotarian. His description of his first grandchild Theodore was charming, but the picture of his receipt for lunch and wearing the gear seemed as though Todd is seeking reimbursement from the Club for his travels ($101)

Rivkah Sass (Sacramento Public Library) will be sauntering in New York City, which does not show up on the list from President Jim, and donated to her Eddie Mulligan ($150). 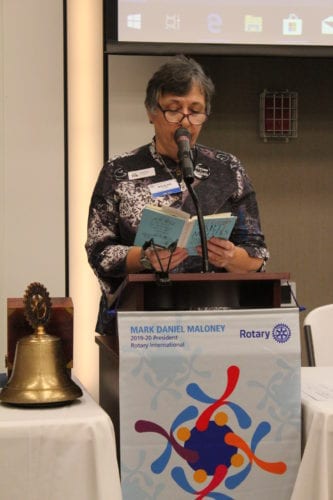 Thanks to Members Who Served During the Meeting

Thank you Elfrena Foord for greeting us with her celebratory piano recital. Also, thanks to the greeters including Winston Eddy, Skip Lawrence, and Art Breuer. Thank you to Paul Keefer (Pacific Charter Institute) for the lowbrow reporting and Mike Bullington (Certified Retirement Income Professional) for memorializing the event with pictures. Many thanks to Maggie Hopkins (Capital Premier Lending & Premier Realty) for the delightful wine reception, and Rivkah Sass for the thought of the day and why reading matters!