The dynamic happenings in Sacramento construction were the focus of the day, as President Diane Woodruff and the club welcomed back commercial developer Mike Heller for his insights. 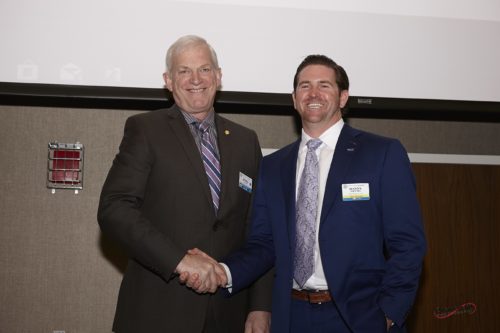 District Governor Jack Arney recognized two of our Rotarians with inspiration awards for exceptional service. Callee Setzer (Setzer Forest Products) and Käthe Nathan (Merchants Bank of Sacramento) were recognized for their service to the club, especially their dedication to the club blood drive. Under their leadership this year, our club is leading the district in blood donations, including a significant lead to date over archrival Point West Rotary!

The Fast Pitch program of Social Venture Partners was saluted by President Diane, who recognized SVP head Cameron Law and numerous fellow Rotarians who participated in the recent event. Giuliano Kornberg (Sacramento Philharmonic and Opera) wowed the crowd with his Fast Pitch presentation.

. Golf for Kids – Bob Miller (First US Credit Union) beat the drum to build support for this important club fundraiser on May 9

Chair of the Day Rick Osen (Sutter Builders) teed up guest speaker Mike Heller, a successful local developer who outlined several ambitious construction projects blooming in Sacramento that will transform the city landscape — from micro-apartments in midtown to a soccer stadium in the railyards to the PowerHouse Science Center.

Next week’s luncheon speaker will be television personality Rob Stewart from Rob on the Road (KVIE PBS).