Our esteemed President Jim Leet (Boutin Jones) called the meeting to order. Rotarians helping Rotarians was the theme of the day. Callee Setzer (Setzer Forest Products) kicked off the presentation offering a fantastic overview of the Sacramento Century including last year’s success; 1,150 registered riders and $115,000 earned on behalf of the Sacramento Crisis Nursery (Sacramento Children’s’ Home). Callee reminded us that the Sacramento Century is only six weeks away with many volunteer opportunities that are still available and vital to a successful event. Callee passed the presentation to Todd Koolakian (Sacramento Children’s Home) who expressed that the mission of the Crisis Nursery is helping families in crisis for a few hours or a few days. Ebony White -Douglas (Sacramento Children’s Home) congratulated Rotary for last year’s contribution. Ebony described the hardship families faced when transitioning to Sacramento County. Finally, a former recipient of services, Mia Nera, expressed how grateful she was for the transformative experience provided by the Crisis Nursery. Mia is a transplant from North Carolina with her son. The support of the Crisis Nursery allowed Mia and her son Nicholas to thrive in Sacramento. 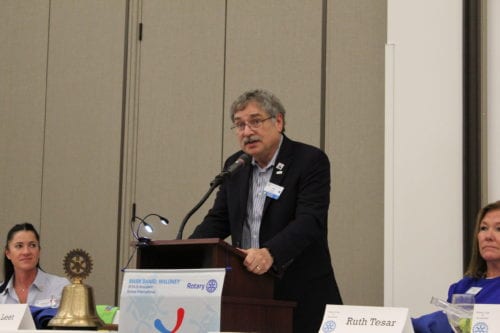 Len Simpson (2020 Financial Advisers of Sacramento, L.L.C.) provided the breakdown of the successful Rotary BBQ Swim Party at the Brautigam and Bartholomew’s. Highlights included wine, kids, grandkids, wine, Mike Bullington painted toenails (thank you for the $250 Mike), and fun for all.

Steve Huffman presented the CareGram for Larry Cassidy with a hip replacement. 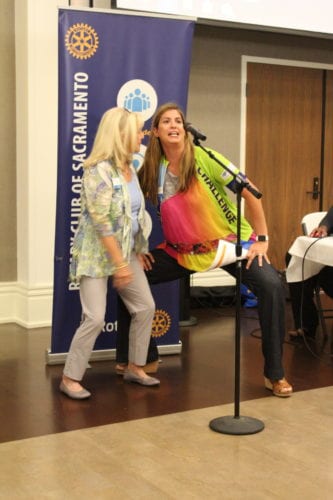 Callee Setzer took off her cape to promote the Brown Bag Day on September 10 emphasizing everyone to sign up ASAP.

Robyn DeLong (Coldwell Banker) announced the upcoming Fireside Chat and alerting everyone that there are only 25 slots.

Len Simpson donated $100 to his Paul Harris for both the recap of the Rotary BBQ Swim Party and his calling out of Mike Bullington.

Mike Bullington donated $250 for the great time that he had at the Rotary BBQ Swim Party and the added painted toenails from his adventures in Lake Tahoe with family.

Over 30 people contributed approximately $30,000 towards the Sacramento Century.

Thanks to Members Who Served During the Meeting 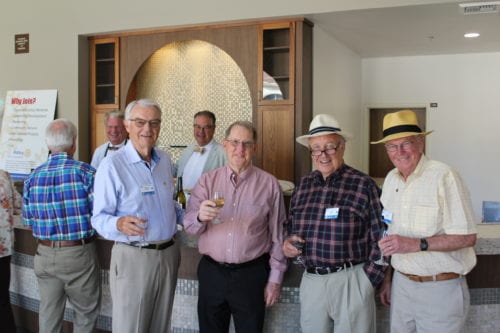 Mike Bullington for memorializing the event with pictures. Thank you Jeff Setzer (Setzer Forest Products, Inc) for the delightful wine reception, and Past President John Frisch (Newmark Knight Frank) for the thought of the day from Will Rogers who wisely stated “never miss a good chance to shut up.”