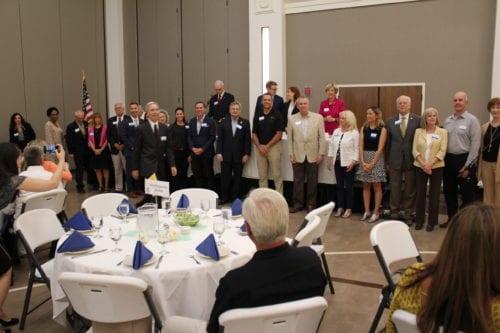 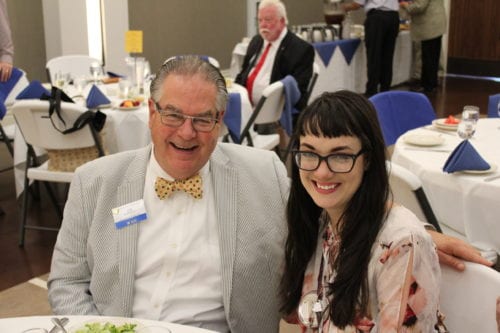 Meeting Sponsor Ed Wright (Attorney, Martensen Wright PC) donated his time to the B Street Theatre, represented by Lindsay Burch.  In 2018, B Street moved to its brand new, state-of-the-art-complex: The Sofia Tsakopoulos Center for Performing Arts, which has enabled them to double the number of children they are able to serve. Since 1986 1.5 million kids have benefited from B Street’s programming, and this summer their reach goes international as children in Beijing will get to experience their performance of The Lion, the Witch and the Wardrobe – part of an international arts festival. 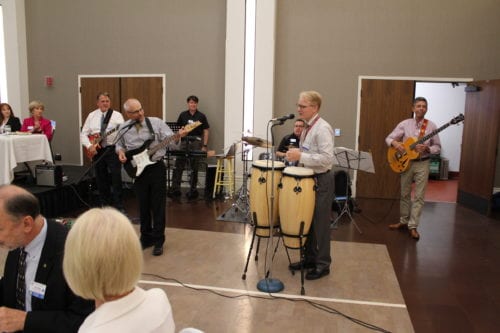 During lunch the Rotary Rockers (Kevin Smith-Fagan, John McIntyre (Mercy Foundation), Kevin Williams (KVIE), Mark Luhdorff (ANPAC Bio), Jeff Stone (HUB International) and Tom Bacon (BCRE – Bacon Commercial Real Estate) returned with four crackerjack performances, leading off with “Bad, Bad Leroy Brown” to remind us all that you “don’t mess around with Jim.”  They then paid homage to President Jim’s profession with the Beatles’ “Taxman,” set him up for a year of great expectations and successes with the Eagles’ “New Kid in Town,” and wrapped up with Boz Scaggs’ “Lido Shuffle.”

THE MAN OF THE HOUR

President Jim’s friend and colleague Bob Rubin told us how open, giving and unselfish Jim is, how he stands up for others, and shared that his culinary guilty pleasure is (lots and lots of) peanut butter. Then Jim’s son and daughter Christopher Leet and Elizabeth Leet Jackson shared with us Jim’s sometimes unique approach to navigation and sage advice that “not all who wander are lost.” They shared his dedication to teamwork and big-picture thinking, and his commitment to helping people do their personal best in order to best serve the community. 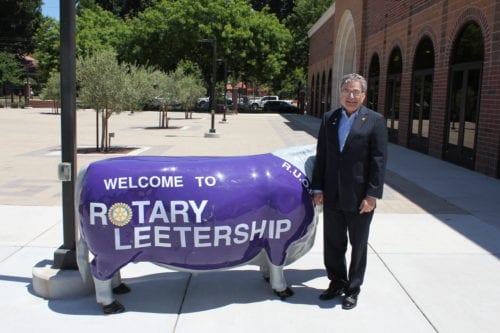 Past President Diane Woodruff pinned President Jim and officially inducted him to office. President Jim thanked Diane for her leadership and his family for allowing him to serve during the coming year. He shared that his answer to the question “What is Rotary about?” can be summarized in five words: Compassionate Leaders Impacting Diverse Communities. He asked us to remember – if ever we feel that we can’t make much of a difference as an individual – that even incremental good is still good done in the world.

Some new and recurring initiatives for the year ahead include: