There were tears.  There was laughter. There was were silly costumes.  President Diane’s demotion had it all and it was an appropriate reflection of her gracious service to our Club over the past year. As emcee, Elfrena Foord (Foord, Van Bruggen & Pajak) introduced John Wood (McGee & Thielen Insurance) for a humorous roast of President Diane’s year that left us all wondering why he doesn’t have his own late-night show, but perhaps it is best that Rotary jokes are kept in the family. Steve Brandenburger (Proprietor) regaled us with stories and photos from the trip to Germany for the Rotary International convention. Steve led us in a German drinking song, which was well known by a surprising number of our members. 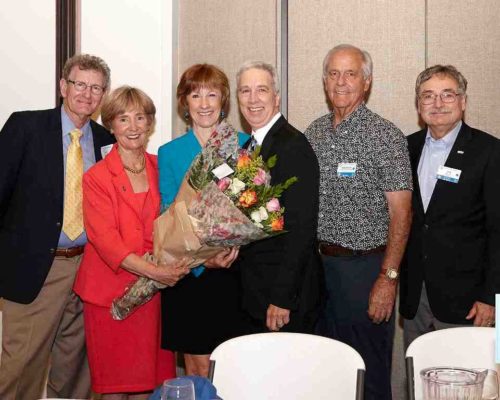 The success of the Woodruff Administration was not just measured in fun and good times. This year our club donated $301,962 to organizations, making a difference including:

$40,000 for Health Impaired Children from Golf4Kids

$17,000 in Community grants for 9 Sacramento nonprofits

$29,622 for miscellaneous other organizations 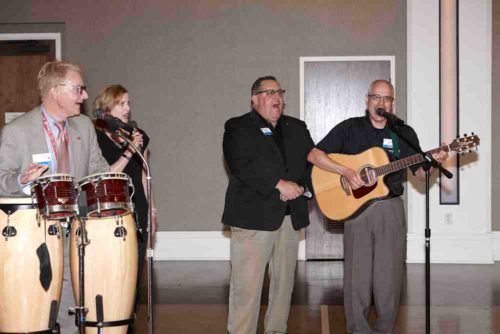 Next the Rotary Rockers, performing as the Woodruffians, did a tribute to President Diane by singing two Beatles songs in 4-part harmony.  Kevin Smith-Fagan, John McIntyre (Mercy Foundation), Kevin Williams (KVIE Public Television) and Shirlee Tully (Capital Public Radio) sang “Your Gonna Lose That Girl” to express how we feel about losing Diane and “You Won’t See Me” in honor of her new-found freedom.

Elfrena then shared her view of Diane’s remarkable qualities. First, the devotion Diane showed in giving 100% of herself to Rotary during her year.  Second, the infectious sense of fun Diane brought to the club.  Elfrena reviewed an amazing variety of zany costumes that Diane wore throughout the year, exemplifying that she “took her job seriously, but not herself.”  The third accolade was Diane’s success in getting members more deeply engaged in Rotary.  As many can attest, she is the queen of acknowledgment for any contribution – large or small.  Elfrena did feel compelled to share Diane’s shortcomings, such as the fact the she has OCD in the picture-taking department, which was on full display as Diane snapped pictures of Elfrena at the podium. 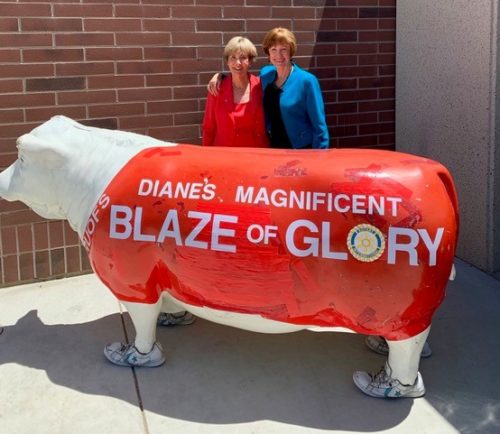 When it was time for President-No-More to take the stage, Diane graciously acknowledged everyone in the room, starting with her husband, Tom.  The accomplishments during her term were impressive. Diane is very proud of the number of volunteer hours our members devoted to the community, resulting in our club being awarded the top District honor for Inspirational Leadership for service. Sharing the limelight as always, Diane ended her comments by saying; “We are a mighty force for good in this world and I am so proud of you!”  We could not be prouder of you; Diane and we are grateful that you have handed the Club over to incoming President Jim Leet in such admirable shape.  We “lost that girl,” but soon we will have a “new kid in town!”

Allison Cagley (Friends of Sacramento Arts) led a sing-along of “Oh, What a Beautiful Mornin’” to invite Rotarians to the Broadway at Music Circus production of Oklahoma this Saturday, June 29 with dinner beforehand at Lucca.

As chair of Son’s Day, Laura Heintz (Stanford Youth Solutions) did a replay of the event with a slideshow depicting Rotary fellowship at its finest – despite the sweltering heat.  She sent best wishes to next year’s chair, Cameron Law (Social Venture Partners) for balmy weather next year. 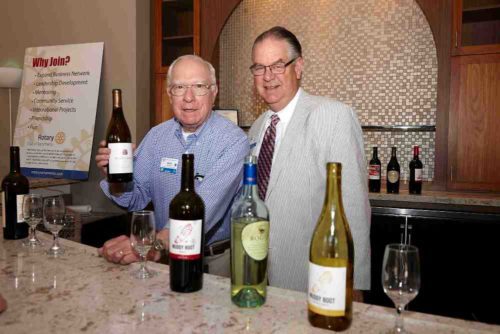 The day’s wine sponsor was Ed Wright and Bob McLean (Mclean & Tillotson Construction).  With or without a glass of wine, everyone was greeted at the door by Danny Gemma (HUB International), Rick Davis, and Judy Daru (JA Collins Properties), and Mark Luhdorff got the crowd in a celebratory mood with his piano repertoire.  Jeff Stone acted as Sergeant-at-Arms and John Swentowsky (Swentowsky Photography) was on hand to capture it all with his camera.  Pulse reporter was Shirlee Tully.