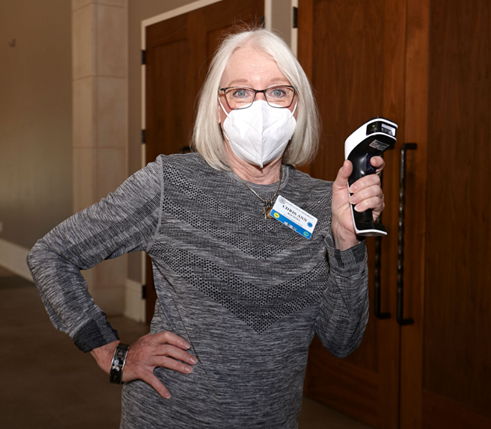 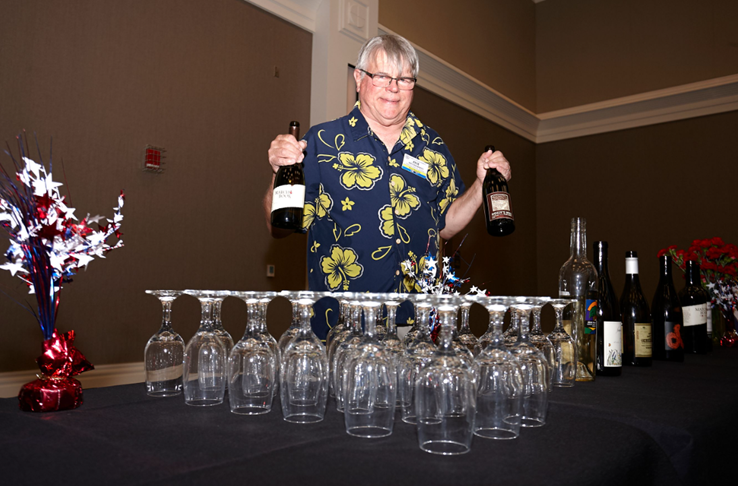 HEAD TABLE
Seated at the head table were MONIQUE AUGUST, Executive Director of the USO for Northern California, PAST PRESIDENT THOM GILBERT (retired, Gilbert Associates), the fabulous KITTY O’NEAL, host of the Afternoon News on KFBK Radio   Link for Afternoon-News with KITTY O’NEAL , and MAJOR MIKE MEEK, a pilot from Travis Air Force Base.
LET’S GO FOR A RUN
Rotarians in attendance were especially generous as there were a lot of volunteers for Let’s Go for a Run, including:
MEETING SPONSOR
PAST PRESIDENT DAN COLE (Commercial real estate) sponsored the meeting and donated his time to the USO Northern California Link for Northern California USO  (“USO”). The USO provides family programs that not only boost morale but provide opportunities for service members and their families. Those programs include but are not limited to Meals 4 Military, Holiday Celebrations, Military Spouse Support Programs, Entertainment Events, Expeditionary Programs, and Transition Programs.  MONIQUE AUGUST, executive director of Northern California USO, said her organization has supported military service personnel for over 80 years. “Wherever they go, that’s where the USO is,” she said. “They defend our freedom and we will be with them every step of the way.” The news each night reminds us all of the importance of our military and the extreme sacrifices made by those in the military and their families. Click here for information on the USO and how you can help-Northern California USO- Volunteer .
NEW MEMBER INTRODUCTION!
SCOTT FORD was inducted as a new member to the club. Sponsored by BOBBY REED (Capitol Tech Solutions) and DICK NOONAN (Railroad Museum), FORD is Economic Development Director for the Downtown Sacramento Partnership.
PRESIDENT MILLER said both his parents served in the military and with that, he turned the meeting over to our many veterans. Many were still able to ﬁt into their uniforms and wore them to the meeting, although PAST PRESIDENT GILBERT confessed that his jumpsuit was a bit tight.
A moving introduction of the ﬂags was presented by our veterans who carried in the ﬂags of the branches of the military each served and posted them next to the head table. PAST PRESIDENT DAN COLE for the Army, JOHN SWENTOWSKY for the Navy, STEVE BRANDENBURGER (Resort proprietor) for the Coast Guard, JIM OLSON (State water resources) for the Air Force, CRAIG BROWN (Home inspection real estate) for the Marine Corps and PAST PRESIDENT TIM PINKNEY (Wealth management) for the Space Force. 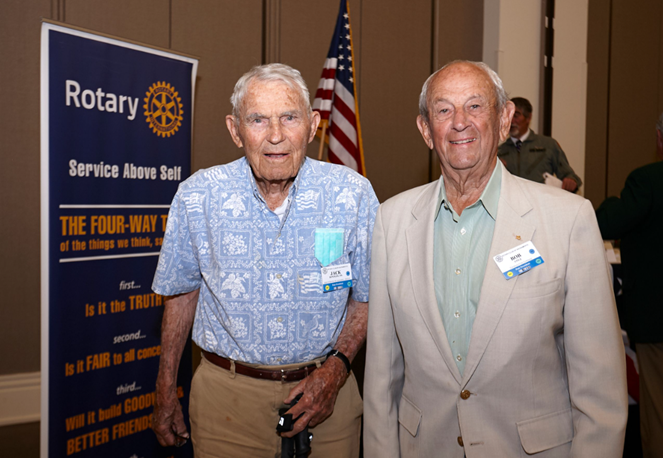 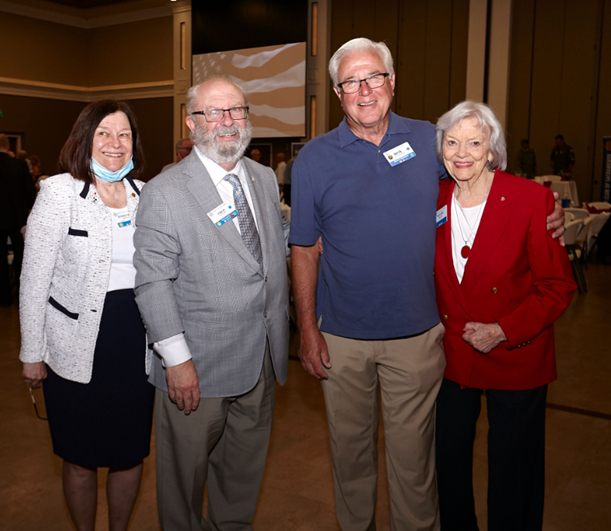 THOUGHT OF THE DAY
VETERAN DR. BARBARA ARNOLD (Barbara J. Arnold MD Inc.) gave the Thought of the Day with a quote from PRESIDENT EISENHOWER:    Every gun that is made, every warship launched, every rocket fired signifies, in the final sense, a theft from those who hunger and are not fed, those who are cold and are not clothed. This world in arms is not spending money alone. It is spending the sweat of laborers, the genius of its scientists, the hopes of its children…This is not a way of life at all, in any true sense. Under the cloud-threatening war, it is humanity hanging from an iron cross.
Growing up, BARBARA recalled learning about the Korean War from the radio and other conﬂicts on the newsreels before movies. DR. ARNOLD praised our club for all Rotary does to educate the next generation in order to be prepared to serve their country. BARBARA, thank you for this important and timely reminder for us all.
A TRIBUTE TO OUR ROTARIAN VETERANS- THANK YOU FOR YOUR SERVICE!
Sacramento’s own KITTY O’NEAL moderated our tribute to Rotarian Veterans and began by relating her family’s deep history with the military. Her grandfather was in ROTC during WWI and continued his service as a ﬂight instructor. Her father, HOWARD F. O’NEAL, enlisted in the US Army Air Corps in 1944, served in Europe and Asia, graduated from the Army War College in 1967, and ultimately served as base commander at the Mather Air Force Base. He was a Rotarian. Other relatives were veterans and most are buried at Arlington National Cemetery. She asked both enlisted veterans and oﬃcers to stand and recite their familiar oath of service. A video displayed the Honor Roll of Military Service of our club members including rank and photos. Veterans who have passed away were honored for their service in a In Memoriam video display. 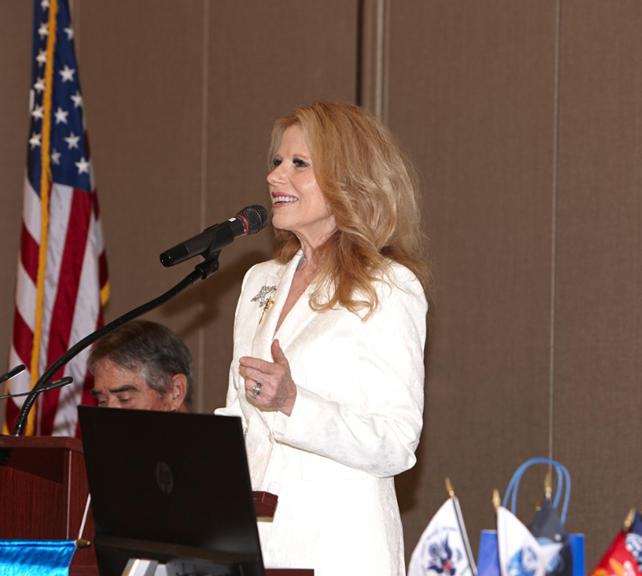 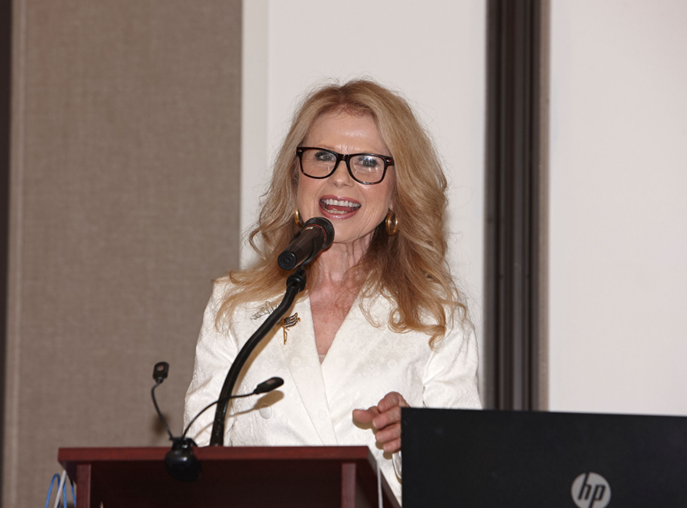 MAJOR MIKE’S STORY
MAJOR MEEK, who didn’t look much older than our grandsons in college, spoke about his service as a pilot and the need for a combination of service, team work and community. He ﬁrst ﬂew a K-C 10 Extender, which is an Air Mobility Command tanker and cargo plane. Going 600 miles an hour, he often refueled ﬁghter jets in the air. Planes ﬂying on fumes need an emergency air refueling because they are “minutes away from crashing,” he said. One air craft carrier commander told him that his pilot was one minute away from ejecting from his plane when they reached him. Another emergency is when there’s an announcement of “troops in contact,” which means they have encountered the enemy and need support from the air.
Next, MEEK ﬂew a C-17A Globemaster III, which is capable of the rapid strategic delivery of troops and cargo worldwide to 35 countries under his direction. He’s now an Instructor Aircraft Commander. During the Covid 19 outbreak, he ﬂew to a little town in Texas to pick up one patient in need of urgent care. “We’re here to support you,” he said. “I love working with folks that want to make our community better.”  Click the link below for MIKE’s amazing story.
Mike Meek Presentation 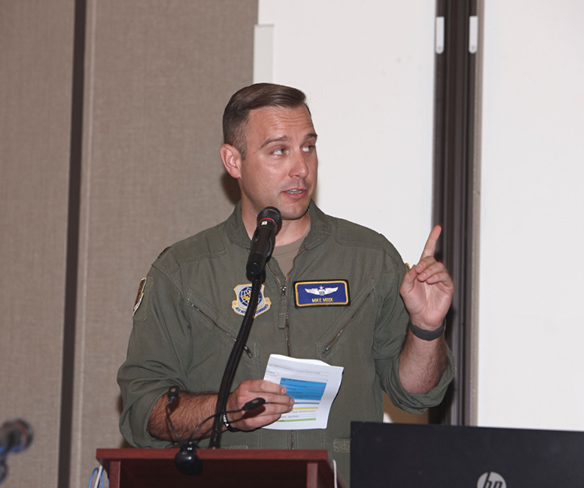 A SPECIAL SERVICE AWARD FOR THOM GILBERT
A special service and improvisation award should be bestowed upon PAST PRESIDENT THOM GILBERT. When technical difficulties playing prerecorded interviews taped with stories from our Rotarian Veterans and inspirational PAST PRESIDENT GILBERT sprang into action with the Club’s Veterans. GILBERT, in his jumpsuit from years gone by (which he wore as a helicopter pilot rescuing soldiers in need of medical care during the Vietnam War,) THOM interviewed many of the Rotarian veterans in attendance who shared their unique stories of their time in service. 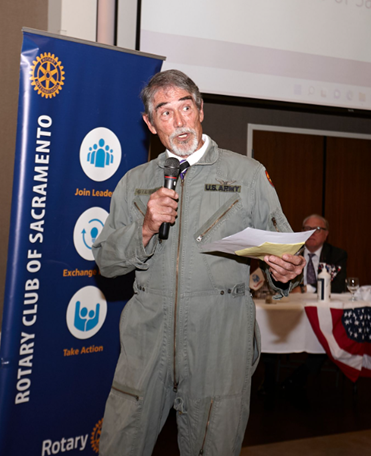 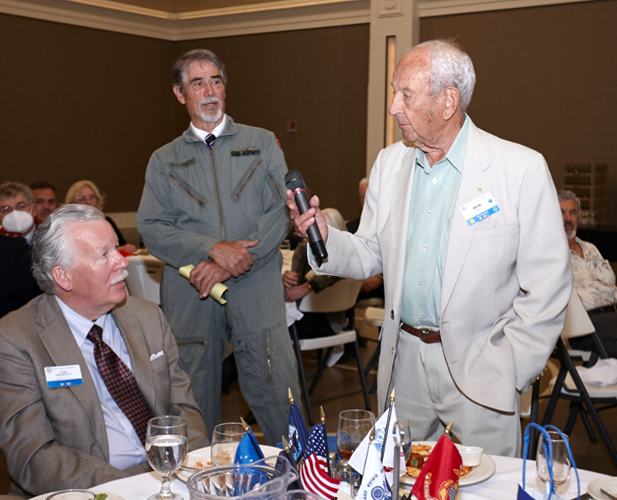 A FEW HIGHLIGHTS INCLUDE:
PAST PRESIDENT BOB COLE (retired, tents and awnings) was serving in China when his son DAN was born and he didn’t get to return to see his son until he was one year old. PAST PRESIDENT DAN COLE took the microphone and said his father was relieved to get a telegram announcing his birth. “He was so excited I’d arrived,” he said. The telegram was delivered late because it had been used as a bookmark.
Air Force veteran BARBARA ARNOLD recounted when she realized the real risk to her life as a pilot. Because there was no DNA analysis available then and a plane with a tank load of fuel might explode into a ﬁreball if crashed, she said the military took footprints of her shoes as a way to identify her body. Still, she loved being a pilot. “I’m glad I learned how to ﬂy,” she said.
STEVE HUFFMAN (Historical Associations) said his military service taught him how to lead a division of 30 men. “I owe the Navy a lot,” he said.
DAVE MCKIE (Commercial real estate) said he served during the cold war and once was interviewed for his post by Navy Admiral HYMAN RICKOVER, who had a disdain for long talks about education and wore no uniform.
“Why do you want to be in service,” he asked a nervous MCKIE, who answered that question then RICKOVER asked what he had learned and MCKIE pronounced that he had learned about the steam cycle. RICKOVER looked disgruntled and said, “Any housewife could tell me about the steam cycle.”
GILBERT remembered one Christmas in 1968 when a member of the USO asked how they could make the holiday brighter. Gilbert asked for copies of Christmas carols which he and others sang to soldiers in the hospital.
“After we sang those three songs, there was not a dry eye in the ward,” said GILBERT.
“That was my best Christmas.” 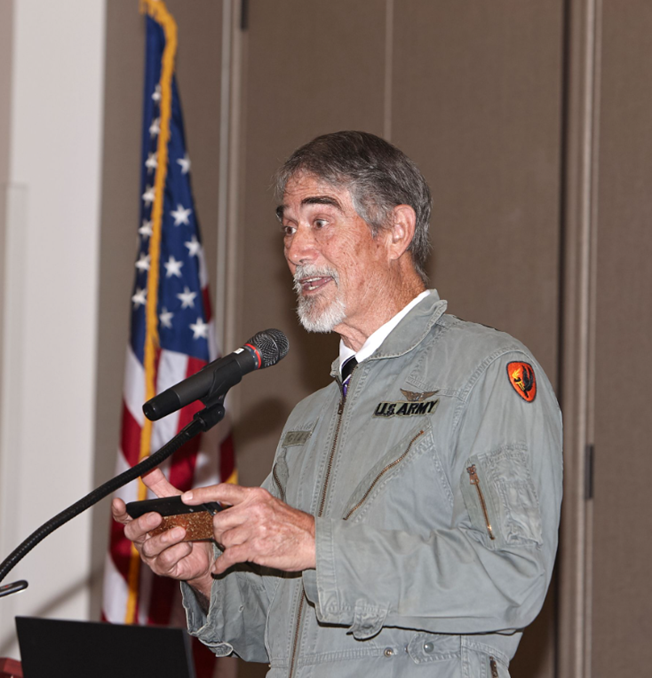 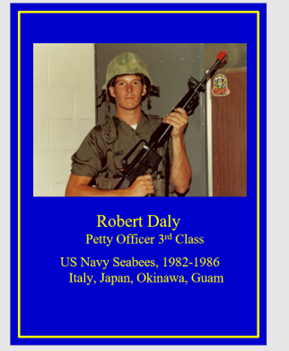 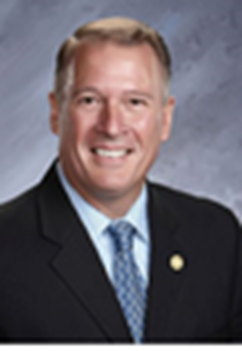 These presentations share some truly inspirational stories that should not be missed.
Our Sons and Daughters
Honor Roll of Military Service
Memorial Presentation 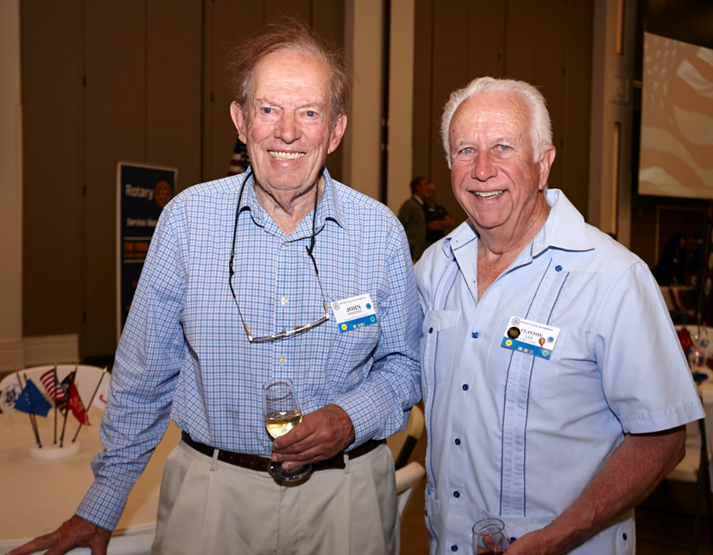 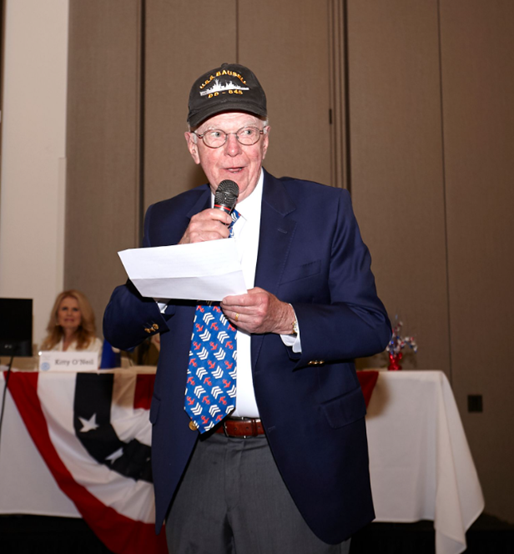 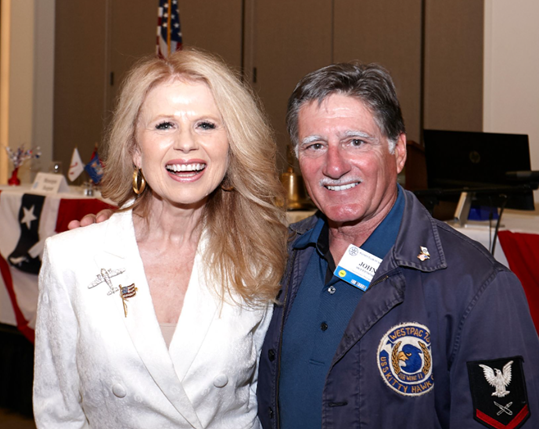 UPCOMING MEETINGS AT A GLANCE!
05/31/2022 – Dark
06/07/2022 – VLAD SKOTS – Ukrainian American House UAHOUSE  You will not want to miss this very timely and informative meeting to learn more about what is happening in Ukraine and how that affects Ukrainian American Families. We all see informative meet. We all see the horrors on the news. Learn about the Ukrainian American House and how you may be able to help.
06/14/2022 – RYAN & ALEXIS SMITH – Room Redux Sacramento Roomredux  Room Redux Sacramento provides Bedroom Transformations for local children who experienced physical or sexual abuse. These transformations help support these victims’ mental health and healing from those traumatic experiences. You will not want to miss the opportunity to learn about this little-known and very important program.