President Jim Leet (Boutin Jones Inc.) kicked off the month of March by acknowledging the role of women in history. Accordingly, March 8 is International Women’s Day.

Robyn Delong (Caldwell Banker) regaled the members with tales of King Arthur’s days, when chivalrous knights and damsels in distress roamed the land. How Arthur, finding himself in a royal pickle, had to answer the eternal quandary of “what does a woman want,” or forfeit his crown – head attached.

To make a longgggg story short, he solved it by persuading his nephew Sir Gawain to marry the homely, nay repugnant, Ragnelle, who then revealed the answer that any enlightened Rotarian would have given. What does a woman want? “Sovereignty over her own decisions,” she told the King.

On their wedding night, Ragnelle turns into the most ravishing beauty eyes ever beheld, having broken the old spell in part. She tells Gawain that the other condition of the spell is that she can only maintain her ravishing looks half the day. She asks him to pick which half. He smartly replies that it is “her” choice, at which the spell is broken completely.

The moral? If you don’t respect a woman’s sovereignty, things might just get ugly.

The record reveals that the Sacramento Club of Rotary heeded Ragnelle’s advice, when on September 29, 1987, it conferred membership on its first female member, Jean Runyon. And now, through the inspiration of President Jim Leet and Steve Ruland (Ruland’s Office Furnishings), we are acknowledging the accomplishments of women in Rotary with the annual “Jean Runyon Award.”

Kathy Herrfeldt (Home Care Assistance) took the podium to inaugurate the festivities. She praised Estelle Saltzman and Kathleen Smith for sharing their memories of Jean, whom Kathy lamented not having had the chance to meet. She then introduced Estelle, who had been Jean’s partner since 1976. Estelle explained the phenomenon of Jean-itude, the attitude of service to the community, celebrated every March 6 at the company. We then watched a slide show of Jean’s life set to the music of “One Singular Sensation” from the musical “Chorus Line.” Featured in the slide show was our beloved Mead Kibbey, singing Jean’s praises.

Kathy then described the trailblazing feats of the Jean Runyon Award winner, and how the award recipient had fulfilled each of the criteria for the award, before finally revealing her identity: Dr. Barbara Arnold (Barbara J. Arnold MD Inc.) 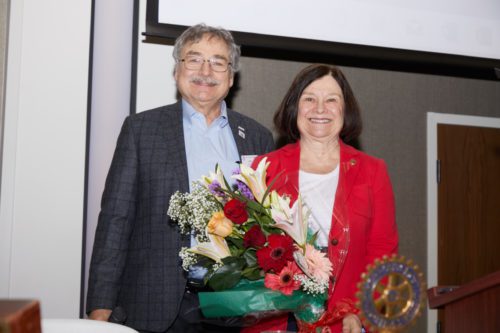 Dr. Arnold was feted with the first red coat and given a thousand-dollar check to use at her discretion, which she promptly dedicated to Fairytale Town.  In her acceptance, Dr. Arnold recalled Jean’s role as a matchmaker and her efforts in bringing her together with husband Dr. Henry Goh, who had been working at Jean’s ranch. Incidentally, Jean also matched Lori and Peter Dannenfelser (Architectural Arts) Yowser!

Barbara recounted her trailblazing ways and her most recent love, Fairytale Town, to which she promptly dedicated her $1000 check. She also recognized Kevin Smith-Fagan as the newly appointed Executive Director of Fairytale. 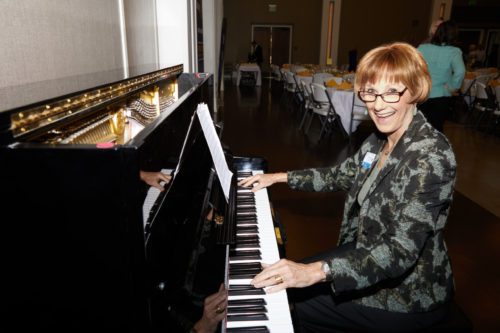 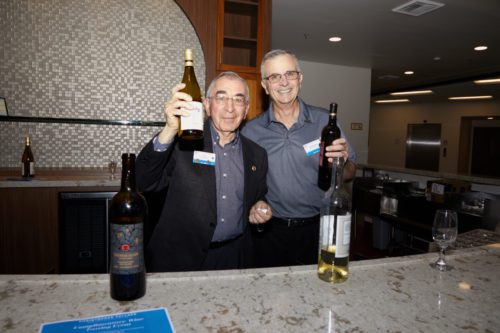 We have many guests attended the meeting.

Our meeting sponsor was Dr. Forrest Junod who donated his time to the Life Skills Training and Educational Programs, Inc. (the “Program”) Stephanie Gerbick explained and illustrated through slides how the Program works with homeless populations and seniors.  Vernon explained that they have an RN that will help with seniors. Stephanie and Vernon encouraged Rotarians to consider volunteering to work with the Program at the property. There’s no doubt that Forrest would be delighted to help you make the connection.

Elfrena Foord talked about a very successful “Magical Winter Celebration,” which featured our Rotary Rockers, to which nearly the whole room got up and danced to. Yowser! Then she talked about how we raised the remarkable total of about $25,000 for Sierra Forever Families and Stanford Youth Solutions, though auctions and gifts. Another highlight of the night was Barbara Clegg and her husband celebrating their 30th anniversary. Well done Elfrena and Bruce!

Jamie Furlong (Bangerter Financial Services) reminded about the Ski Trip, this week, and that on March 31, the Young Professionals will be running the show at our luncheon.

Bruce talked about the annual Dive Bar excursion on April 17. $199 a head, with a host of benefits. The 6 remaining tickets were promptly scooped up.

Len Simpson (2020 Financial Advisers of Sacramento, L.L.C.) announced the Mystery Trip to a Land Down Under on May 28.

Art Breuer let us know that this year the Rise Against Hunger event will take place on April 18. Last year 300 people volunteered and 73,000 meals were prepared for hungry students. Rotary International has partnered with Rise Against Hunger.

President Jim announced Networking Night on March 25 at the Sawyer.

Rita Gibson (Rita Gibson Ins & Investment Services Inc.) went on a $250 journey to celebrate her Charles J. Soderquist Award from the UCD Foundation, which gave her a check for $5,000, which she immediately awarded back to the Foundation.

Ann Ryan Solomon donated $100 to the club for the privilege of bringing back a pendant from the Downtown Auckland Rotary Club.