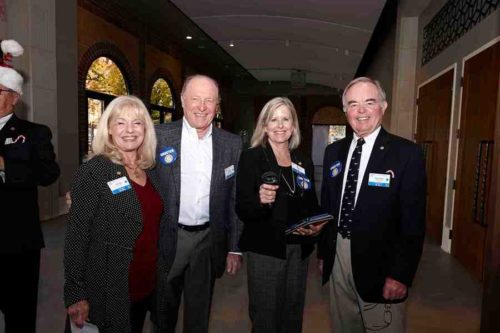 Rick Osen (Sutter Builders, Inc.) provided an inspiring reflection on the importance of transforming lives through giving, noting what an important part of the Rotary priorities and legacy such giving has been over the decades.

President Jim then turned the meeting over to Becki Roberts to oversee the presentation of the Rotary Club of Sacramento Foundation.

Becki began by noting that the RCOS Foundation was begun in 1971 with an initial corpus of $1,100 and since that time, with careful management and continued investment by Rotarians, the Foundation has grown to nearly $3.4 million! Becki then introduced members of the Foundation Board and had them stand to be recognized. She then asked Mike Gilligan to share about the relationship of the RI Foundation and the RCOS Foundation, with the former focused on global/national level initiatives, and the latter focused primarily on local priorities and action. Rick Davis was then called forward to provide an annual report of the RCOS Foundation. Among highlights was the $150,000 raised in 2019 through events – primarily the Sacramento Century bike ride and Golf 4 Kids. Among prominent expenditures was $48,000 on youth and community needs and $36,000 for international water/food-literacy initiatives. Rick also noted with appreciation the $16,000 raised spontaneously at club meetings to support emergencies, such as the recent fires in Northern California.  Linda Geery (Gilbert CPAs) then stepped forward to share about the management of the Foundation’s investments, handled very effectively by True North. As the presentation was reaching its zenith, President Jim then asked that the Rotary Rockers bring everyone back down to earth with some music. The Rockers performed The Foundation’s classic “Build Me Up, Buttercup,” and an evocative rendition of Bill Wither’s “Lean on Me.”

Now again in control of their emotions, Becki and team continued the Foundation presentation. Bob Daly (Financial Network Wealth Advisors) then strode to the mic to detail how Golf 4 Kids has continued as the longest-continually-running event in all of Rotary, begun in 1922 and continuing to this day. Funds from this event help children with spina bifida, cerebral palsy and severe autism at selected Sacramento schools. $33,000 went to this purpose in 2019 and more than $480,000 since the event began.  Mike Bullington showed a slide show of a recent WASH (Water, Sanitation & Hygiene) initiative in the Dominican Republic, where he and others participated. Todd Koolakian (Sacramento Children’s Home) encouraged Rotarians to consider leaving a legacy with the RCOS Foundation in their estates, noting that anyone who makes lifetime contributions at $10,000 or more, or who leave at least that amount in their estates for the Foundation can earn their place among “The Immortals,” while anyone leaving a legacy of any amount can be part of the Club’s “Legacy Circle.”

ENCOURAGEMENT of GIFTS to RCOS FOUNDATION

Becki opened the floor to encourage members to make gifts to the Foundation to continue its excellent work and several members rose to accept that opportunity to make gifts, particularly to complete their next Eddie Mulligan and/or Paul Harris.

Danny Gemma (HUB International) yielded his time to Wes Oberlin who is the director of Work-Study and Business Development at Cristo Rey High School Sacramento. The school provides college-preparatory education to students from families of extremely limited means (avg. income for a family of four is $36,000/year). Wes shared that what makes the school distinctive is that the kids go to classes four extended days and then on the fifth day students work in a local business to develop professional skills and build relationships, yet their work also helps pay for their education – nearly 2/3 of Cristo Rey’s budget is funded by these work arrangements. The school is still looking for additional business partners who could use talented, conscientious students to work with them. The cost to hire a team of four students is $28,000 for a year of their productive efforts. Wes asked for hands of Rotarians who already have a Cristo Rey student active at their workplace and several hands went into the air. Wes noted there is continuing need for student placements – need 80 additional placements – and he urged anyone interested in exploring the idea to contact him at 916-733-2660, extension 3300.

President Jim then wrested the gavel and the microphone from Becki and called forth Sgt.-at-Arms John Wood to announce our next meeting. The meeting will occur next Tuesday at the same time and location and will be the Club’s Annual Meeting.