Led by President Jim Leet (Boutin Jones Inc.), yesterday’s luncheon was our club’s annual meeting, which happens every year. (Everybody is a comedian). During the meeting, we welcomed a returning member and a brand-new member. After his tenure at another club, which shall remain nameless, John Shelby (Merchants Bank of Commerce) has returned to the best Rotary club ever (#BRCE)! President Leet also heartily welcomed Jaydeep Balakrishnan (CSUS College of Business) to our ranks.

There was great fanfare as the new board of directors was announced for President Elect, Kevin Smith-Fagan’s term of office. Mark Luhdorff (IMD Path) will serve as Treasurer and Allison Cagley (Friends of Sacramento Arts) will be our Sergeant at Arms. The new board is an accomplished group including Gerry Dabi (Golden Pacific Bank), Christie Holderegger (VOA), John McIntyre (Mercy Foundation), Alice Sauro (Sacramento Philharmonic & Opera) and Bobby Reed (Capitol Tech Solutions).

There wasn’t a sound in the house as we sat on the edge of our seats waiting for Past President Diane Mizell to announce the nominee for President Elect-Elect. Not to bury the lead, but our candidate is a native Californian who was raised in one of the smallest incorporated towns in the state, Point Arena. After a high school career graced by academic and athletic excellence, our nominee attended Sacramento State, where they played 3 years of football with the mighty Hornets and received a B.A. in history. Somehow, this northern California resident became a huge fan of USC football, the LA Dodgers and the LA Rams. Perhaps a geography lesson is in order.

Lest you think our nominee is not well rounded, this person has run one marathon, fifteen half-marathons, completed six sprint triathlons and one Olympic distance triathlon, and is a red wine afficionado and craft beer maker. He is a legendary baker due to his fascination with the Great British Baking Show. Our nominee also had a brush with fame by being an extra in the 5-time Oscar nominated film, Ladybird, and is celebrated for soulful renditions of James Taylor songs at local karaoke venues.

Our nominee has worked in the banking industry for 25 years, currently as the commercial and small business lender for First U.S. Community Credit Union. This person also serves on the board of the YMCA and the Partnership Council for the American Cancer Society and will chair the board of directors of the Elk Grove Chamber of commerce in 2020. 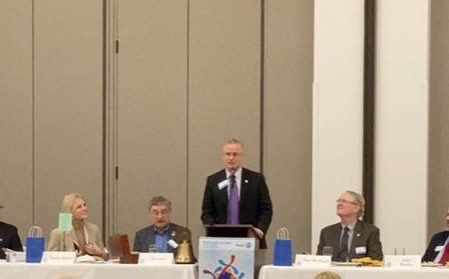 As for Rotary service, this person joined our club in 2013, is a 2-time Paul Harris recipient, serves on the current board of directors, and is our championship Rotary softball team’s longtime third baseperson. And now for the biggest clue, this person is best known for being on the Golf 4 Kids committee for 5 years and chairing the committee for the past 3 years. So, with no further avoidance of pronouns, our nominee for the president who will serve from 2021-2022 is…. BOB MILLER!

Callee Setzer (Setzer Forest Products) threw down the gauntlet by informing members that our club is in the lead – by just 2 donations. If that doesn’t inspire you to put down the eggnog and get yourself to Vitalant (formerly Blood Source,) nothing will!

As Chair of Daughter’s Day, Alice Sauro reminded us that Daughter’s Day is next week if you would like to attend, you need to RSVP for the meeting when we can all be inspired by daughters and granddaughters who represent the future.

After luring us with candy canes over the past several meetings, Steve Ruland (Ruland’s Office Furnishings) announced that our donations to the toy drive will be dropped off at the Salvation Army today and ultimately, will find their way into the hands of deserving children in time for Christmas. 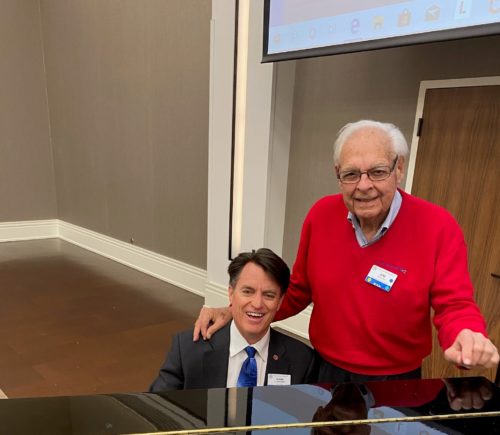 President Jim reminded Rotarians to brush off their dance moves in time for the Sweethearts’ Dance coming up on February 22nd.

LET’S GO ON A JOURNEY 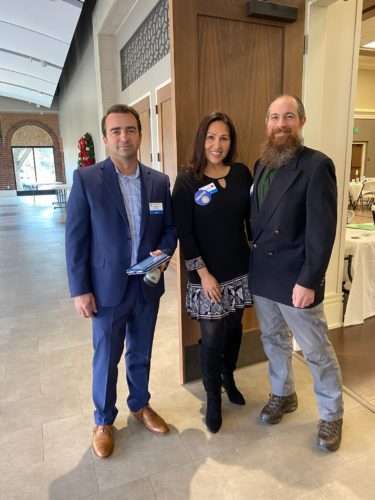 The day’s wine sponsor was Bonnie Plummer (SPG).  With name tags in hand, everyone was greeted at the door by the gracious trio of Strati Vourakis (Calm Computing, Inc.), Steve Hymas (Downey Brand LLP) and Laurie Wright (Tri Counties Bank.) Mark Luhdorff of Rotary Rockers fame warmed up the crowd with his repertoire of favorites plus a few improvised tunes. John Wood McGee & Thielen Insurance Brokers served as Sergeant-at-Arms and occasional standup comedian.  The thought for the day was St. Francis of Assisi’s prayer for peace delivered by Past President Dan McVeigh at his most tranquil. The pulse reporter was Shirlee Tully (Capital Public Radio), who provided fact-based coverage of the proceedings.