Rotary Meeting, August 16, 2022
WELCOME/GAVEL IN
PRESIDENT LINDA (Gilbert & Associates) gaveled in the meeting at 12:10 pm, welcoming all to today’s meeting as two introductory minutes of Hotel California served as the soundtrack for guests to find their seats. 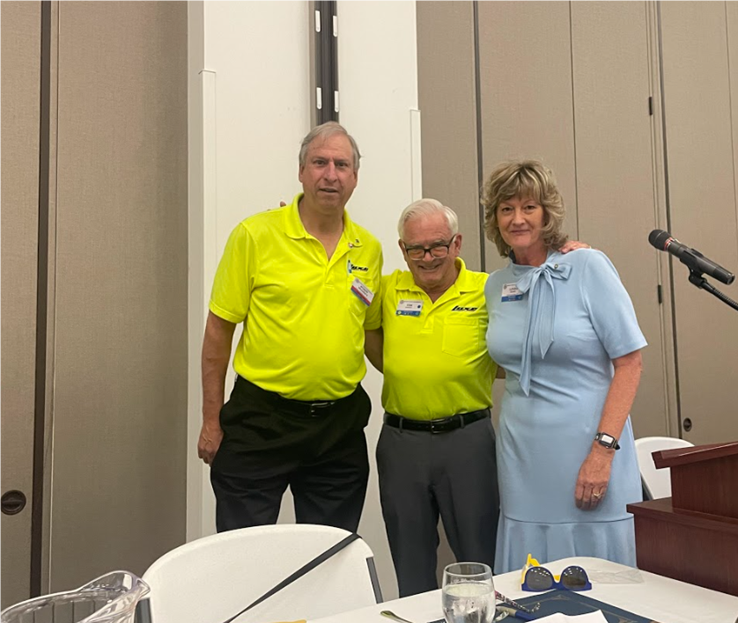 THANK YOUS
PRESIDENT LINDA thanked this meeting’s greeters ROBYN DELONG (Coldwell Banker) and DAN FENOCCHIO (Cunningham Engineering); the redoubtable ELFRENA FOORD was acknowledged for her specialty service at the Registration Table, filling in for KIEFIE BREWER who was away tending to Art, as he recovers. The grumbling over the absence of the Wine Reception was immediately quelled as PRESIDENT LINDA promised double portions next time… As ever, there was a collective yawn in acknowledgment of Pulse Reporter JOHN MCINTYRE (Mercy Foundation). SARAH HODGE (AQWA) provided photography for today’s meeting.
THOUGHT FOR THE DAY
JEANNE REAVES (Jeanne Reaves Consulting) provided the thought today, mindful of today’s presenter and the topic of business. JEANNE reflected that supporting/patronizing a local small business doesn’t help a high-flying CEO get another yacht, but instead helps a family provide a little girl dance lessons, helps a boy play Little League, and more – local businesses are the life’s blood of a community and merit our support, as investing in them is investing in ourselves and our community. Thank you for this timely reminder JEANNE.
CARE GRAM
PRESIDENT LINDA shared that ART BREUER is under the weather and would welcome good wishes and notes. With that in mind, PRESIDENT LINDA encouraged Rotarians to consider sending him a note on one of the conveniently located Care Gram cards on each table. Get well soon ART!
INTRODUCTION OF GUESTS
Sgt.-at-Arms KATHE NATHAN rose to introduce guests:
HEAD TABLE
PRESIDENT LINDA announced those who graced the dais today:
MEETING SPONSOR
PRESIDENT LINDA invited DR. BARBARA ARNOLD to the dais. DR. ARNOLD shared images of some of her many lovely paintings celebrating the Sacramento Delta (several of which have been and will be auctioned to benefit KVIE). She noted that she has traveled on behalf of our region on annual Cap-to-Cap visits, making the case for supporting businesses, local farms, and for other gems in our region, prominently including the Delta. She is concerned for its welfare, with threats to its health from increased saline intrusion, if more fresh water is directed away from it to other regions. She urged all to take an interest and visit to see why the Delta is one of California’s significant National Heritage Sites. 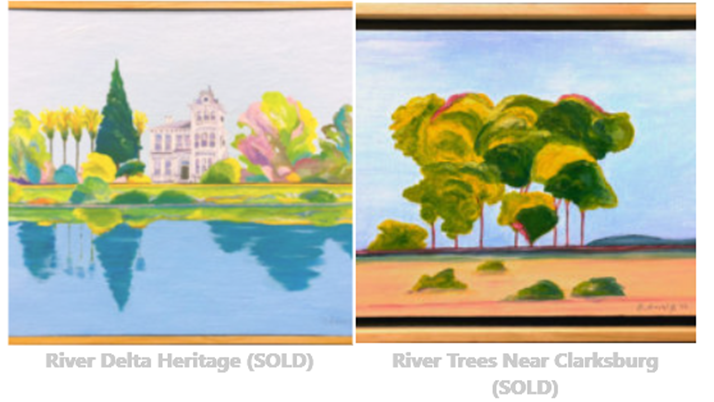 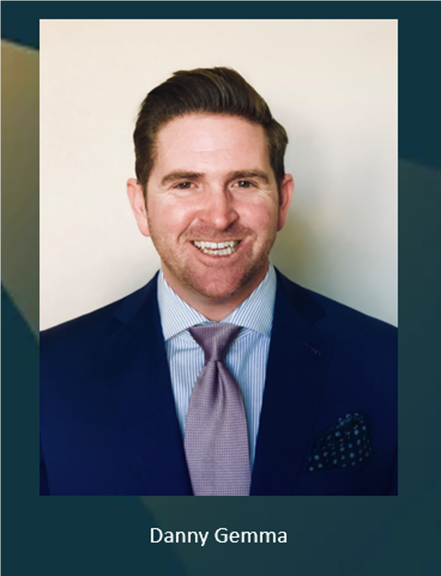 DANNY is an Insurance Broker at HUB International. Headquartered in Chicago and the 5th largest brokerage in the world, the Sacramento office has roughly 70 employees including DANNY’s colleague and friend our Rotarian JEFF STONE. DANNY was recently promoted to Vice President and awarded the title of Healthcare Specialty Expert for his work with Hospitals, Physician Groups, and Healthcare related Insurance Risks. His specialty has opened doors for him to work with Hospitals and Physician Groups locally as well as for several Rural Hospitals throughout the West.
DANNY recently joined the “40 Club” and no, that isn’t a hip new “in” club in Sacramento. He is now turned 40 years old. Being 40, he has now accepted that stretching is indeed a workout, and he also believes that mowing his lawn is his version of “personal therapy”.
Fun Fact –DANNY’s favorite hobbies are slalom water skiing in the summer at Lake Almanor, and duck hunting during the winter. DANNY and his wife’s favorite way to “cook” these ducks is by taking them to SIMON’s restaurant in midtown to enjoy with family and friend
TED WHITE
8/4 Birthday
15 years in Rotary 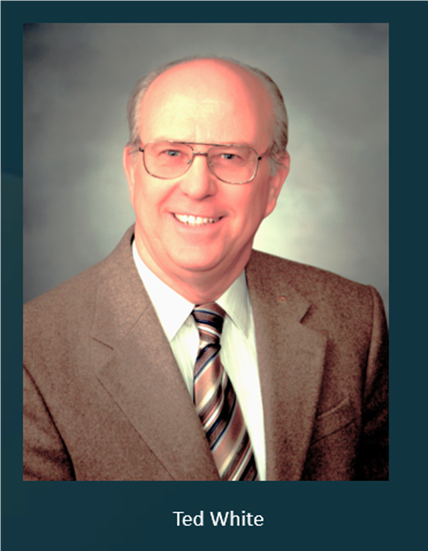 TED is the founder and now chairman of the board of Sacramento Delta Property Management which manages the rental needs of owners of single-family homes. TED has worked in this arena for 44 years and has grown his business well, some by acquiring other property management firms as their owners have retired. And now his son, ALEJANDRO, is taking over the business as TED transitions to full retirement.
TED states that his success was possible for 2 reasons. First, he really enjoys helping property owners rent and maintain their real estate. Secondly, he has fun and was passionate about training and developing his staff.
TED adores travel. His first overseas trip to Germany was visiting their exchange student they hosted in Sacramento. His second was a trip to Japan for an International Peace Conference hosted by the YMCA when he was Chairman of their Board.
Fun fact – TED and his wife ELBA have 3 grandkids. When each of them reach 4th grade and is studying California history, they take that grandchild to visit 4-8 California missions so that grandchild can bring their California history to life.
CLUB ANNOUNCEMENTS
Click here for the Sac Century Kickoff Presentation PowerPoint! 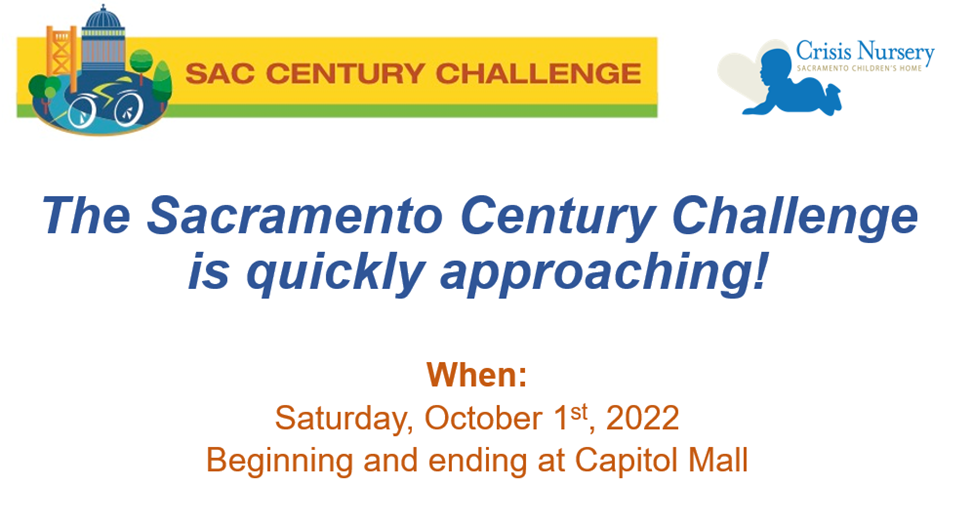 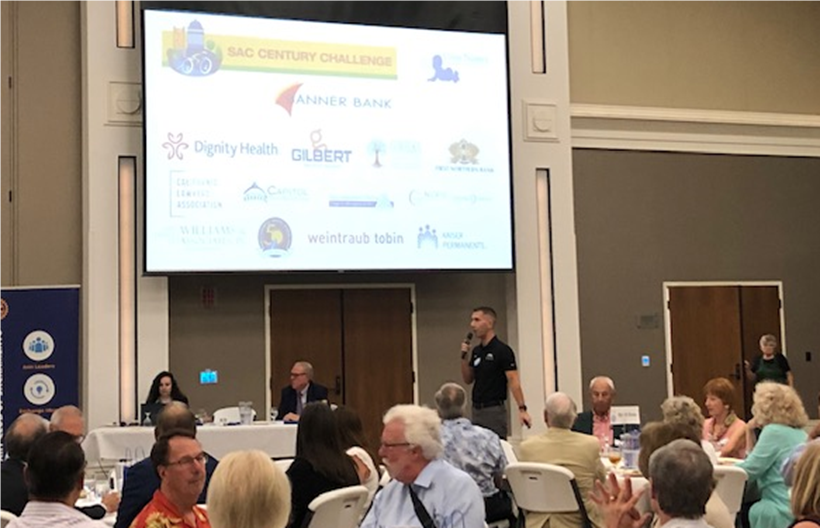 NEW MEMBER INTRODUCTION
With military bearing, past-president TIM PINKNEY strode to the podium to introduce new member JOHN MASSEY (Luxe Aviation). JOHN has been a 16-year Rotarian in Rocklin, where he had already served two terms as president and 13 as treasurer. He is deeply engaged in the community, most particularly with the nonprofit, “Girls Love to Fly,” which, as the name suggests, encourages young girls to get involved with aviation and flying. TIM pinned JOHN as the Rotary crowd welcomed him with a standing ovation.
YOU’RE A GEM 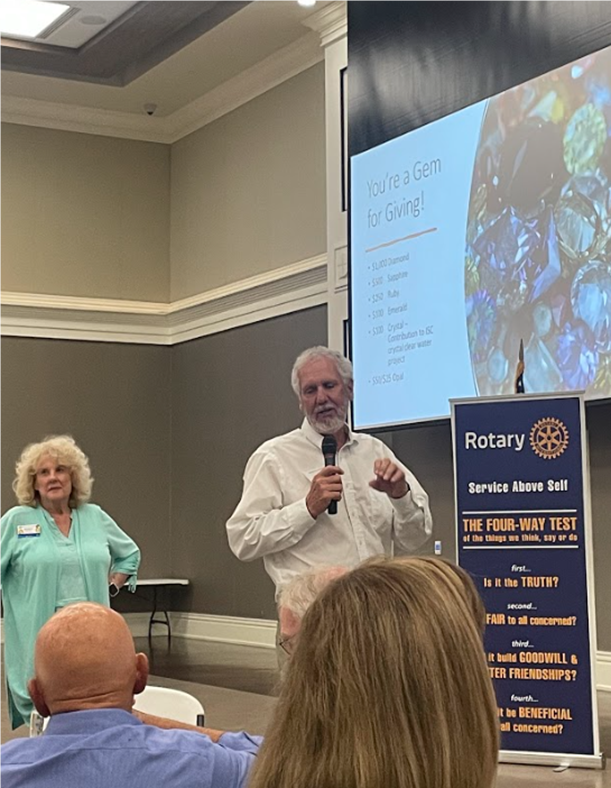 SPEAKER INTRODUCTION
Chair of the Day PAST PRESIDENT and PAST DISTRICT DIRECTOR FRED TEICHERT offered that JENNIFER BARRERA’s work intersects with all our lives supporting the needs of business throughout California – the most populous state in the nation and the 5th-largest economy on the globe. JENNIFER joined the California Chamber of Commerce in 2010 as an attorney. In 2017, she became the executive vice president, and this past year became the CEO. With tongue firmly implanted in cheek, FRED noted that earlier in her life, JENNIFER had been a whitewater rafting guide, training that ensures she is well-equipped to navigate the turbulent waters of California politics.
SPEAKER
JENNIFER BARRERA sees herself as an optimist, a cheerleader for business in California. She said she learned early on as a presenter that it was best to start with the positive… she noted that California is the planet’s 5th largest economy, so the world can’t ignore us; that California is perfectly situated for import and export, with busy ports up and down the state. We have a diverse and well-educated workforce, outstanding education (particularly higher education), a wonderful climate, and abundant natural resources.
BUT… we also have challenges. The California Chamber twice a year does polling of members? Of the general public? Not stated, but it would be important to know how representative the poll is…] and this year they found that the state’s top issue is homelessness. Respondents are concerned that the government response lacks “humanity,” yet also concerned about the impact on business. The second major concern is costs/inflation. JENNIFER said the tax structure and energy rates in California are among the highest in the nation; gasoline is the highest, housing – median home price is now more than $800,000!
California had a $91 billion surplus this year and she feels some of those funds should have been put into paying off loans the state received during the pandemic, however the State is carrying $18 billion of that original $22 billion loan, meaning businesses must pay a $27 per/employee charge to help retire that debt. JENNIFER feels the State should have paid off that $18 billion with a portion of the surplus, rather than rebating a larger portion to citizens just before this fall’s election… The surplus payments, in her view, put a band-aid on a problem, rather than dealing with the root issue.
JENNIFER takes some pride in the Cal Chamber’s “Job Killer List,” which has been a feature of the chamber since before she was there. This past year there were 18 bills on that list, yet only one still remains.
She noted that the Legislature is concerned about Climate Change, but this is less of a concern to the business community. GOVERNOR NEWSOM asked the assembly to pass five climate laws before the end of session on August 31st, all of which will have business impacts. She encouraged us all to watch for these and think about how they could impact our own business interests.
JENNIFER prognosticated that the Covid sick-leave provision will be extended – “There’s no way to stop it” – although it was originally intended to sunset on October. 1st.
As JENNIFER concluded, JOHN FRISCH asked about Prop 27, relating to Sports Betting. JENNIFER noted that this would be an expensive proposition determining whether sports betting could be done online, or only at California Indian casinos. She said the Cal Chamber didn’t take a position on this, but said it was likely to be one of the most expensive proposition campaigns in state history – and we just need to decide who should make the profit from sports betting… 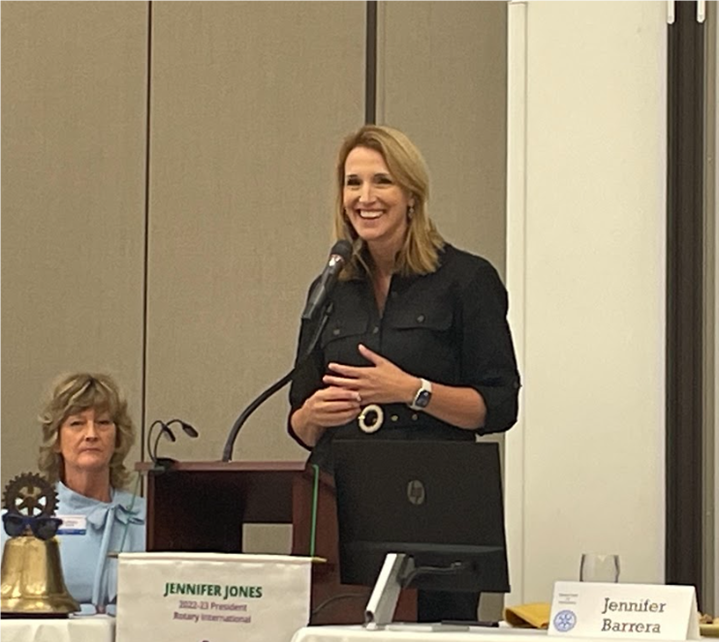 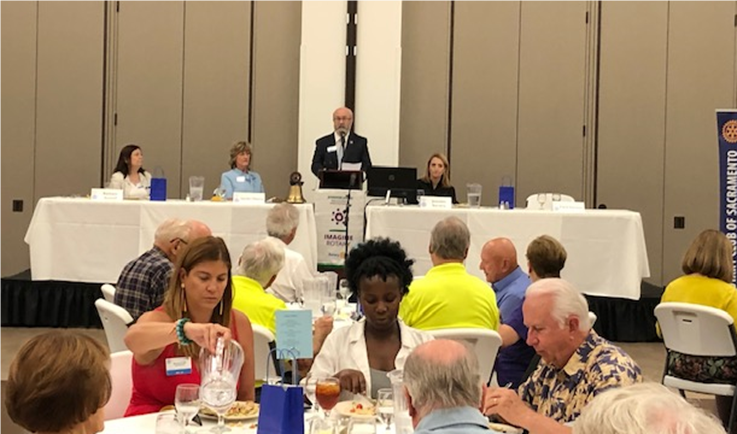 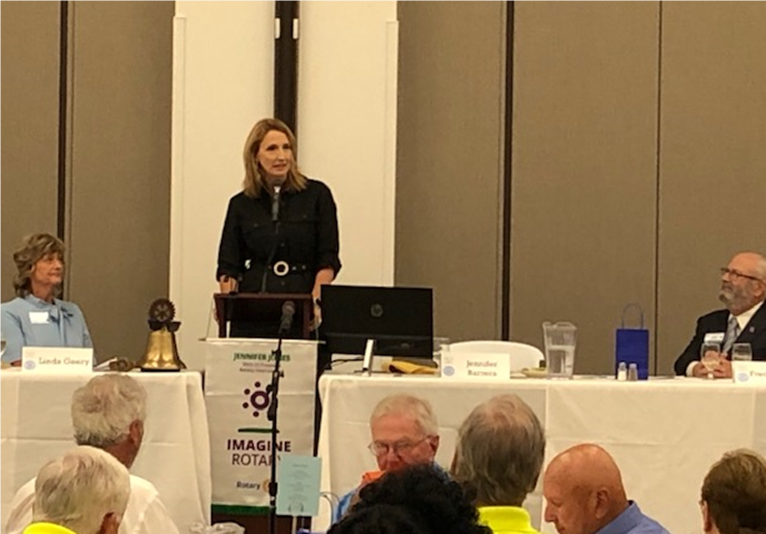 NEXT MEETING
After thanking JENNIFER BARRERA for her presentation, PRESIDENT LINDA called on Sergeant-at-Arms KATHE NATHAN, who announced that our next meeting would be at the usual spot and usual time.
PRESIDENT LINDA concluded the meeting at 1:30 pm.
COMMITTED TO THE CORE 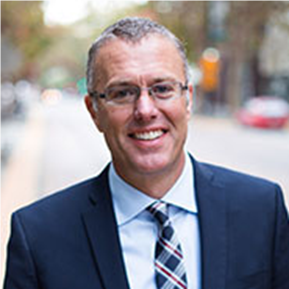 MICHAEL AULT is a big-picture guy whose professional life is focused on just 66 square blocks of Sacramento. The long-time Executive Director of the Downtown Sacramento Partnership, AULT will be our guest speaker on Tuesday, August 23rd. Rotarians and their guests will get a chance to hear from him about what he’s doing to promote strategic development in Sacramento’s downtown core area. As always, the meeting will be in-person at noon at the Annunciation Church, 600 Alhambra Boulevard. Be sure to make your reservations early! Watch for the sign-up email coming your way soon.
UPCOMING MEETINGS AT A GLANCE
08/23/2022 -Downtown Sacramento Partnership – MICHAEL AULT –https://www.downtownsac.org/
Don’t miss this opportunity to be the first to get the scoop and inside information on the new projects, businesses and restaurants downtown! 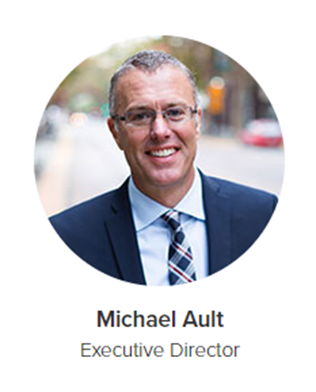 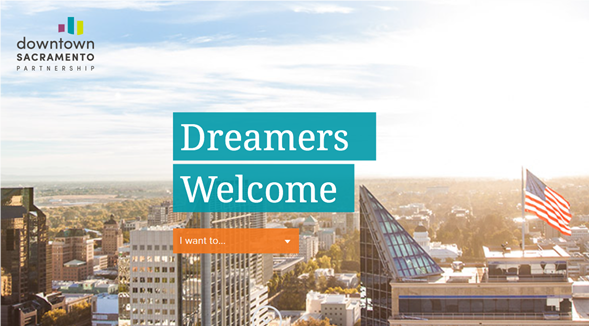 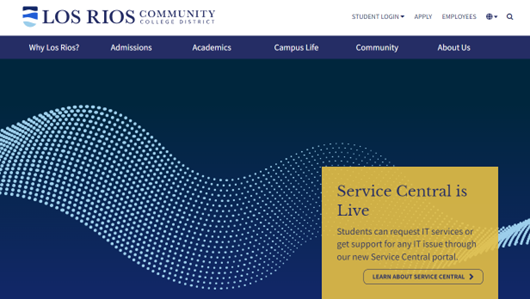 Free community college was dropped from the Biden Tax Bill- Don’t miss the opportunity to learn what may be in the works for community colleges!
09/06/2022 – Dark – have a reasonably enjoyable and legally prudent afternoon……