Rotary Meeting: January 25, 2022
DUE TO OMICRON AND RISING GAS PRICES, THIS WEEKS RECORDING CANNOT BE MADE AVAILABLE.
GAVEL IN:
Like clockwork, as 12:10 approached, a flurry of familiar Rotarian faces gradually filled the room, many fully equipped with a glass of wine and all with smiling faces. The cascade of philanthropist entered the Annunciation Greek Orthodox Church, the home of our weekly meetings, but not without a genial welcome. Greeters RICK OSEN (President/Sutter Builders, Inc.), DICK OSEN (Retired Attorney), KEVIN WILLIAMS (KVIE/Chief Sponsorship Manager), RIVKAH SASS (Library Director & CEO/Sacramento Public Library) ensured we were all met with friendly and homely salutations. The four ounce pours that fell into Rotarian wine glasses were brought to us by none other than ED MELIA, as our Wine Reception Sponsor. Luckily for us ED knows the value in providing the right type of refreshment. JOHN GORALKA (President/The Goralka Law Firm), yet another member of the taskforce, transcribed the days events as the day’s pulse reporter. We felt the commencement of the meeting when PRESIDENT BOB MILLER (Business Services Manager/First US Community Credit Union) called us to order as he administered the well-deserved thanks you’s to these Rotarian volunteers. 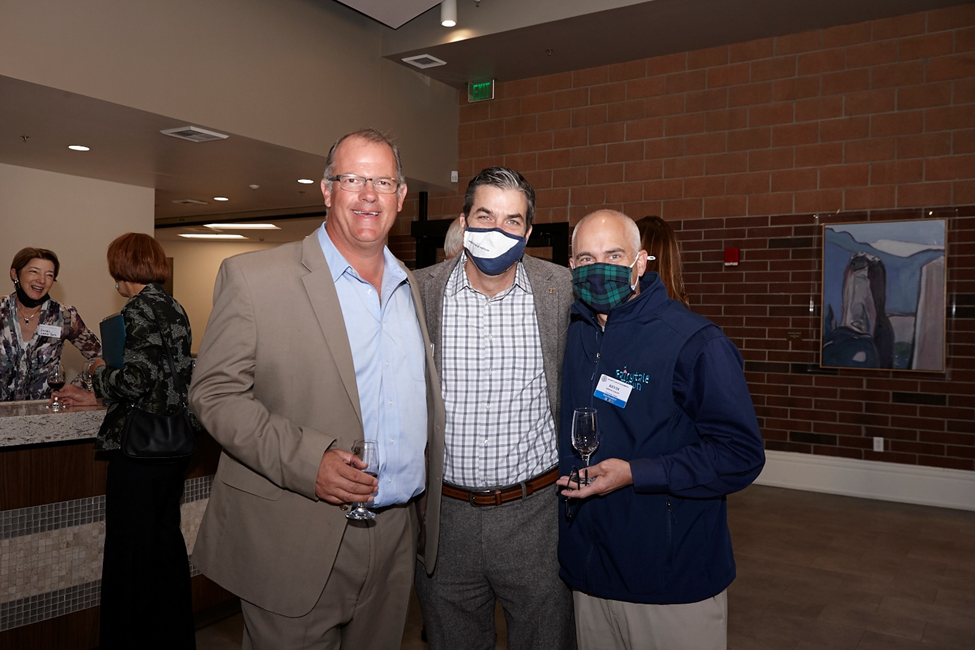 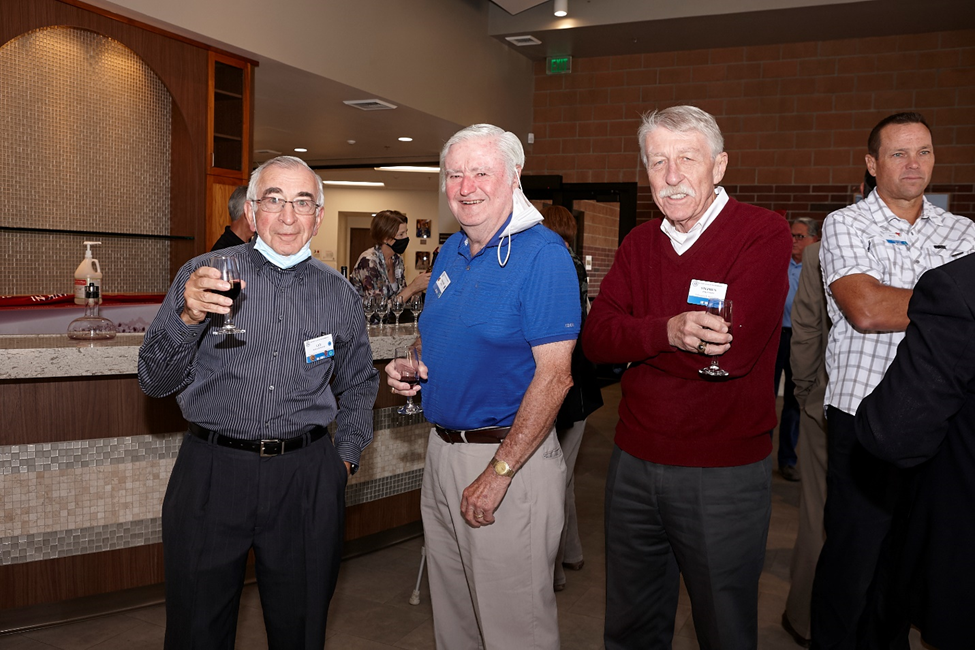 THOUGHT FOR THE DAY:
KELLEY MORAN, who is the CEO of Barjrang Yoga, gave us a little glimpse into her world by illustrating the philosophical framework by which many Yogic practices derive. She brought to light the cultural significance of Thich Nhat Hanh, a multifaceted and iconic figure within Buddhism. Thich Nhat Hạnh was a Vietnamese Thien Buddhist monk, peace activist, prolific author, poet, teacher, and founder of the Plum Village Tradition, historically recognized as the main inspiration for engaged Buddhism. Known as the “father of mindfulness”, Nhat Hạnh was a major influence on Western practices of Buddhism. With this inspiration KELLEY invited members to connect with their breath in honor of his memory. With each breath, members gained a slightly better understanding of eastern practices. When KELLEY provided us with this thought we had the added benefit of being reminded to incorporate mindfulness into our daily lives. 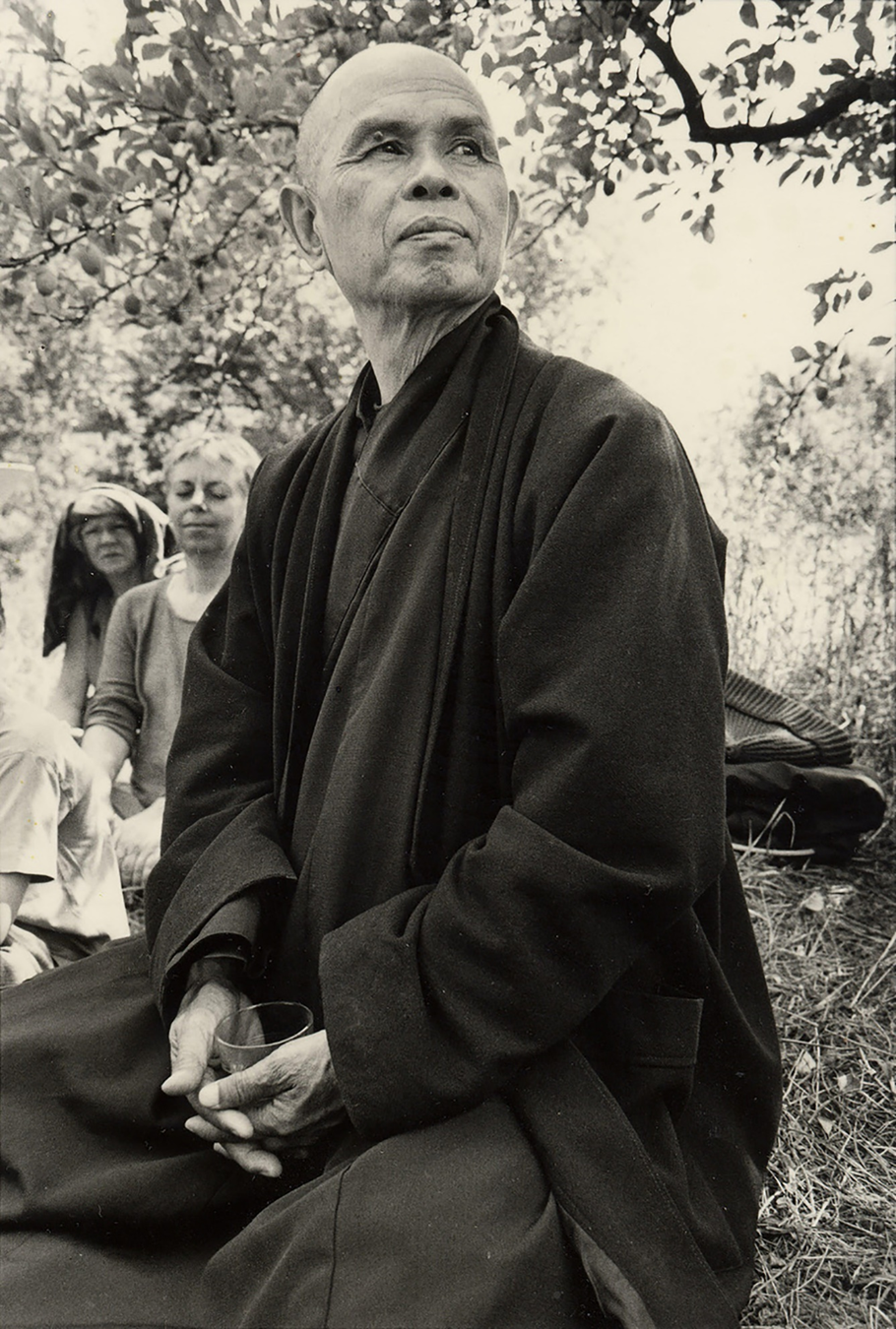 INTRODUCTIONS:
PRESIDENT BOB MILLER led us in the pledge of allegiance after introducing guest Rotarians who we welcome with open arms, prospective members which exemplify our ever-expanding Rotarian community, and visiting Rotarians who are always a pleasure to have.
HEAD TABLE
Gazing up at the dias we were able to see the fearless faces of PRESIDENT ELECT NOMINEE TODD KOOLAKIAN (Director of Philanthropy/Sacramento’s Children’s Home) an ever so valued member. STRATI VOURAKIS (President and Owner at Calm Computing) had the pleasure of acting as our Chair of the Day. We have Rotarian testimony as to the quality of the introductions he delivered for our guest speaker, ROB VLOPE (CEO of Ignite 360), who also sat proud at the head of the table. Lastly, PRESIDENT BOB MILLER as we would expect, could also be seen gracing the table.
GUEST SPEAKER: 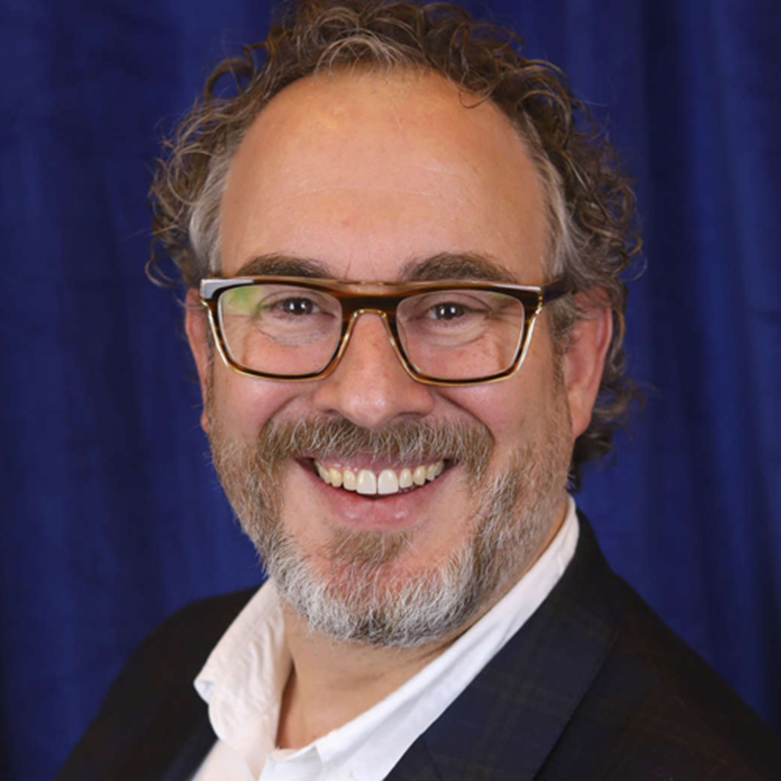 We received the honor of hearing from ROB VOLPE, CEO of Ignite 360, who busted some commonly held myths about empathy and shared how to utilize empathy in the workplace.
Tuesday’s guest speaker, ROB VOLPE, is an astute observer of life and a master storyteller who brings empathy and compassion to the human experience. As CEO of Ignite 360, he leads a team of insights, strategy, and creative professionals serving the world’s leading brands across a range of industries. As a thought leader in the role of empathy in marketing and the workplace, he frequently speaks on the topic at conferences, corporations, and colleges. He is a graduate of Syracuse University’s S.I. Newhouse School of Public Communications and lives in San Francisco with his husband and 3 cats.

ROB VOLPE defined empathy as the ability to connect with another’s perspective or emotions as if you were them – the ability to walk in someone else’s shoes, as them. He stated that people often are afraid of the “E” word and can be resistant to it. 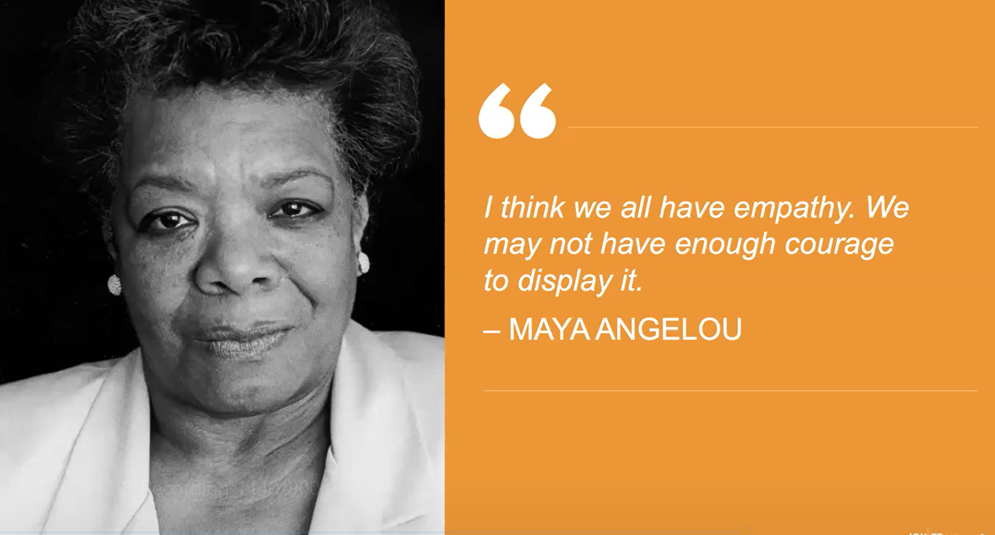 He presented important tools to help refine empathetic skills by informing of us 11 facts and 5 steps to empathy.
Fact #1– Empathy is NOT sympathy

Fact #2– There are two distinct forms of empathy: cognitive and emotional. 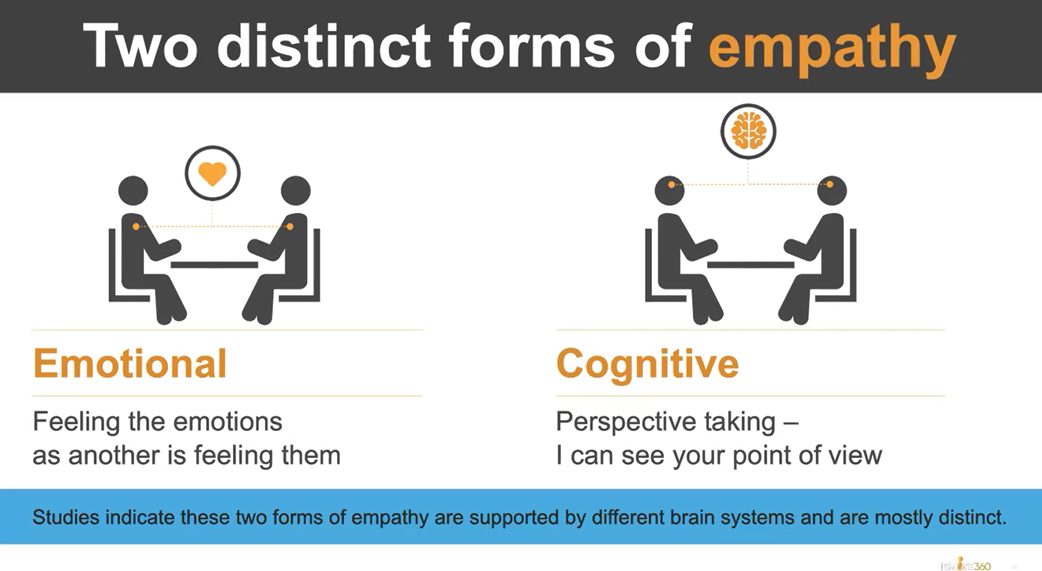 Fact #3– Humans are hard-wired for empathy. It is a neurobiologically-based competency rather than a mere “soft skill” according to leading Harvard neuro-scientist Helen Riess. 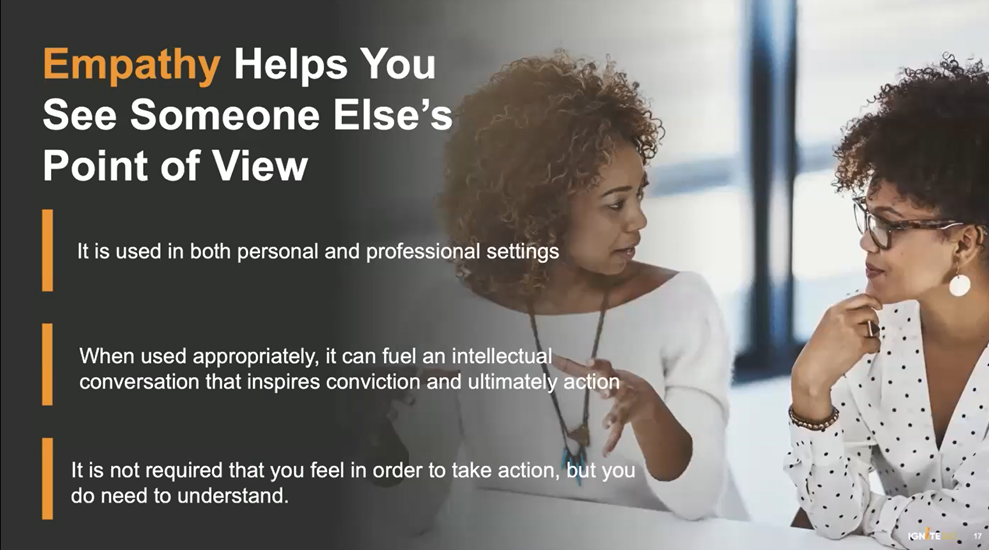 Fact #4– Post 2000, college students have 40% less empathy than their earlier peers.
Like your muscles, building empathy requires training and practice to stay strong
Fact #5– 31% of US adults aren’t able to easily see another’s point of view.

Fact #6– 90% of Gen Z are more likely to stay at an empathetic employer’s company
Fact #7– Only 1 in 4 employees believe empathy in their organization is sufficient
Fact #8– ¾ felt engage in their jobs when they have highly empathetic managers
Fact #9– 61% of employees with empathetic leaders are able to be innovative at work, verses the 15% with less empathetic leadership
Fact #10– 97% of customers say empathy is the most important element in customer engagement.
Fact #11– More than 50% of US adults want to improve their empathy skills

In summary, the application of empathy is intellectual (cognitive) exercise, empathy empowers other and is the secret ingredient to a well-functioning society, and it takes continual practice to keep empathy skills strong. We were immensely grateful and lucky to receive ROB VOLPE’s insightful presentation, especially because of how well it coincided with core Rotarian values.
WHAT’s NEXT?
Didn’t get a chance to make it to last week’s meeting? Don’t fret! There is still a chance to make it to the next one! Join us Tuesday, February 1, 2022 at The Annunciation Greek Orthodox Church from 12:10-1:30 PM to hear guest speaker Supervisor Don Nottoli from Sacramento County.
UPCOMING MEETINGS AT A GLANCE: