President Diane rang in the meeting at 12:10pm.

Neil MacMullan (FARO Consulting Solutions) offered a Thought for the Day encouraging us to seize the day (which we, as Rotarians, embraced and got busy doing).

The club observed a moment of silence in honor of long-standing and stalwart member Mead Kibbey following his recent passing. 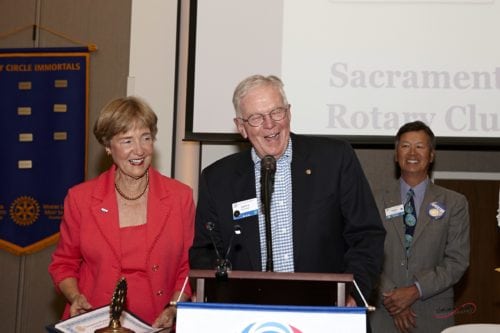 Past Emperor Wes Yee (Yee Dental Care) unveiled our club’s newest honoree to be welcomed into the hallowed Sacramento Rotary Fellow-ship. As his description delved into the honoree’s background at least one face reddened continuously. After an impressive recitation, Wes announced Steve Huffman’s (Huffman Strategy) name, at which time the crowd erupted in a standing ovation and an impressive collection of Huffman relatives emerged from the wings.

Meeting Sponsor Brian Turner (Law Office of Brian H. Turner) donated his time for an update on the Sac Century. Event chair Past President Susan Sheridan (retired-law) gave an update on stats — 840 riders thus far, accounting for $63K (target is $75K), and ‘Challenge Champions’ have raised an additional $43K (target is $50K). Susan says we’re a short ride away from our targets, with the aim of netting $100K for the Crisis Nursery program at Sacramento Children’s Home.

President Diane shared the wonderful news of Norm Marshall’s (Headwaters Construction) wedding to longtime partner Francy. To make it Rotary-official, Past President Dan McVeigh (Downey Brand, LLP) presided over an impromptu ceremony with the happy couple and pronounced them Rotarian and Spouse. 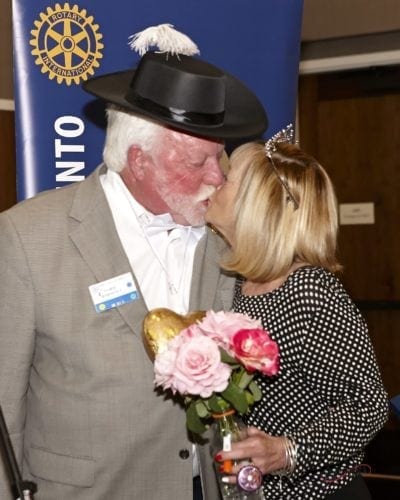 President Diane asked Jack Bowker (retired) to rise to be recognized for his approaching 96th Birthday. Jack also noted that he has been in the club 53 years. Bob Cole (Goodwin-Cole) then took the mic, acknowledging his long friendship and making a gift to the Rotary Foundation in Jack’s honor.

Mr. Lichtman shared how the media has changed with the rise of social media and the incremental decline of traditional print media. The Sacramento Business Journal has carved out a niche by focusing largely on small business and providing “local market intelligence,” so small businesses can compete more effectively. Mr. Lichtman suggested that “hyper-targeting” has power and that broad targeting can lead to potential challenges, as no organization can be all things to all consumers. 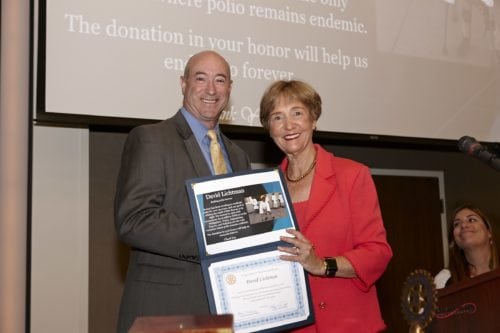 Next, Mr. Lichtman shared noteworthy facts about the Sacramento market:

Mr. Lichtman noted that bloggers and social media contributors do not feel bound by journalistic ethics/integrity, and can publish uncorroborated statements, hearsay and opinion as though these were fact. He emphasized that the Sacramento Business Journal was committed to journalistic integrity.

Our speaker next week will be Mike Testa, CEO of Visit Sacramento.

As always, thank you John Swentowsky (Swentowsky Photography) for the photos!