President Diane Woodruff gaveled the meeting into being at 12:10pm, noting that our club, “the oldest, biggest and best Rotary Club in our region,” had been recognized with an award at the recent Rotary Foundation Dinner.

Thought for the Day:

Steve Huffman shared observations relating to the anticipated presentation of TV guy ‘Rob on the Road’ Stewart, referencing several of the sites Rob has visited, including, memorably, a Donkey Rescue. Amen.

President Diane introduced Bob Miller (First US Community Credit Union), intrepid chair of Golf 4 Kids, who provided an update on this year’s event – May 6, 2019. He reminded us that this event is the oldest continuously held fundraiser in all of Rotary, begun in 1922 – before a few of our members were born! He then shared a video featuring our own ‘Rob on the Road’ Scherer, who provided a video tour and interviews with people at the Ralph Richardson Center, one of the beneficiaries of Golf 4 Kids. The video was touching and the help we provide through this event is clearly making a difference for the children in the Center’s programs.  The event annual nets in the range of $40,000, all of which supports the growth of these remarkable kids. 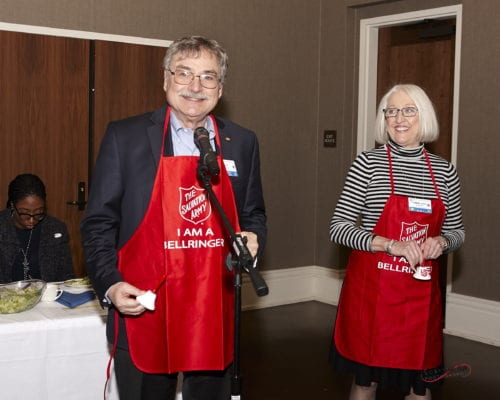 o   Next Fireside on Wednesday, November 14

Jeanne Reaves (Jeanne Reaves Consulting) assumed the podium and shared that our speaker, Rob Stewart of KVIE’s Rob on the Road, had strep throat and Jeannie took the initiative to banish him from our meeting until he was healthy. President Diane then shared that this was one of a Rotary President’s least-favored circumstances, but because of the creativity of Rotarians and some serendipity, she was ready with solutions – not one speaker, but three! Steve Huffman, Linda Gilbert, Jim Culleton (Strong and Associates Printing) and Kathy Fleming – Steve, Linda and Jim speaking as Service Above Self in Action, and Kathy sharing more about Fairytale Town.

Steve Huffman shared his experience volunteering with Reading Partners, with which he’s been working for five years. This organization helps kids get to grade-level reading prowess by 4th grade. If kids can’t read at grade level by then, they are four times more likely to drop out of school. 60% of 4th graders in Sacramento are below that standard, so this is important work and 90% of the kids who participate get up to that standard. Steve noted that he volunteers a couple of hours a couple of times a week, and that it’s not heavy lifting, but very worthwhile. He encourages all Rotarians to consider giving it a shot.

Linda Gilbert echoed Steve’s comments, noting that “If (the kids) can’t learn to read, they can’t read to learn!”

In a related vein, Jim Culleton shared his experience distributing dictionaries to 3rd grade classrooms at challenged schools in Sacramento. He says “pound for pound, it’s the most rewarding program in Rotary…” He encourages Rotarians to join in – they go into the classroom, distribute a book to each student, have them put their names in the books and then challenge them to look up some fun words. Jim notes that, frequently, this is the first book the child has ever had and they are often amazed that they get to keep it. 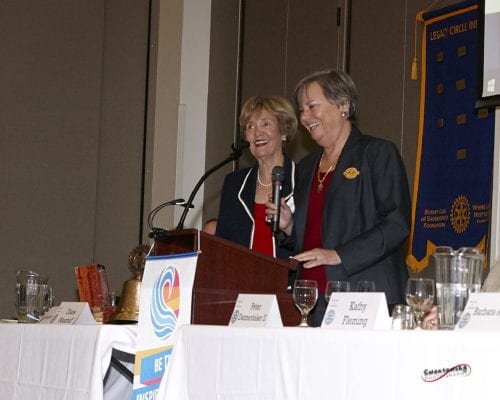 Kathy Fleming shared some surprising facts about Fairytale Town, including that, with more than 250,000 visits/year, Fairytale Town is one of the top five attractions in Sacramento.  She also mentioned several programs for kids of all ages, including day camps, geocaching, a book event, and volunteer programs for teens. And for the much-older kids, there is a mini-renaissance faire, Tales and Ales, concerts, and conferences focused on the importance of play.

Kathy highlighted their Sac Adventure Playground, based in South Sacramento at Maple Neighborhood Center. Here kids get to work with real tools to construct and ‘de-construct,’ as well as to explore arts and imaginative play.  She noted their work with Sacramento Children’s Theater, providing theatrical performances for Title I schools in our area. Lastly, she shared that Fairytale Town was expanding by half an acre, including an expanded entrance (although Humpty is secure) and a new interior, hands-on, literary-oriented space. She concluded with her thanks to Rotary for support over the years and encouraged all to, “Play every day!”

In Q&A,  Becki Roberts (Central Valley Community Bank) thanked Kathy for her presentation and remembered having had a childhood birthday at Fairytale Town, (um, 9 years ago…) and she honored Kathy’s visit by making a contribution of $100 toward her Eddie Mulligan.

Elfrena Foord reminded all that we would next meet at the same location next Tuesday. The guest speakers will be Jody Nelsen and David Woods Bartley discussing the impact of mental health on families.