Rotary Meeting: December 16, 2021
DUE TO THE SEVERE STORM AND POWERSTATION FAILURE ON MONDAY, WE DO NOT HAVE A RECORDING OF TUESDAY’S MEETING.
INTRODUCING OUR PRESIDENT FOR THE DAY:
Have you ever heard of a Guest-President? Well, you have if you attended last Tuesday’s meeting! The President for the Day was BAILEY PAVELCHIK in place of PRESIDENT BOB MILLER (First US Community Credit Union). BAILEY is the granddaughter of ROY ALEXANDER (Sacramento Children’s Home/Retired). BAILEY is a freshman at Creighton University. She is nursing major, and her future goal would be to become a forensic nurse. BAILEY is currently a member of the Creighton Rowing Team and Freshman Leadership Program. We were lucky to have her! 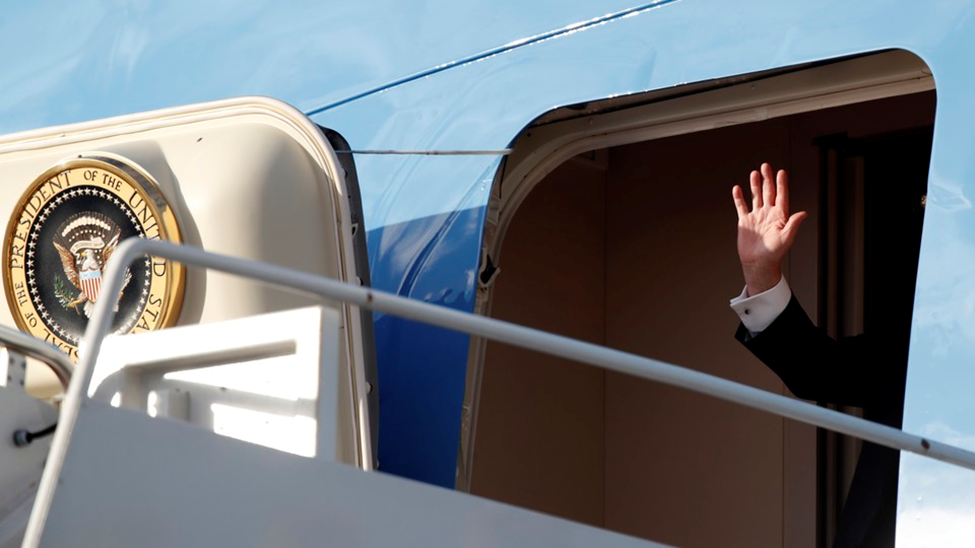 We want to especially thank JOHN SWENTOWSKY (Swentowsky Photography) for these excellent photos! He truly outdid himself this time with a surplus of picture-perfect moments!
GAVEL IN:
BAILEY thanked PRESIDENT MILLER for donating his platform to her and expressed her excitement to lead the day for Family Holiday Traditions Day. Formerly, this was the annual Daughter’s Day, one of Rotary’s longest traditions. In honor of cultural diversities and family, Tuesday’s goal was to celebrate different cultural holidays. In proper Rotary tradition, BAILEY began by administering many well deserved thank you’s. She thanked Annunciation Greek Orthodox Choir for providing beautiful music while we gathered, then continued to introduce a very special assemblage of staff. 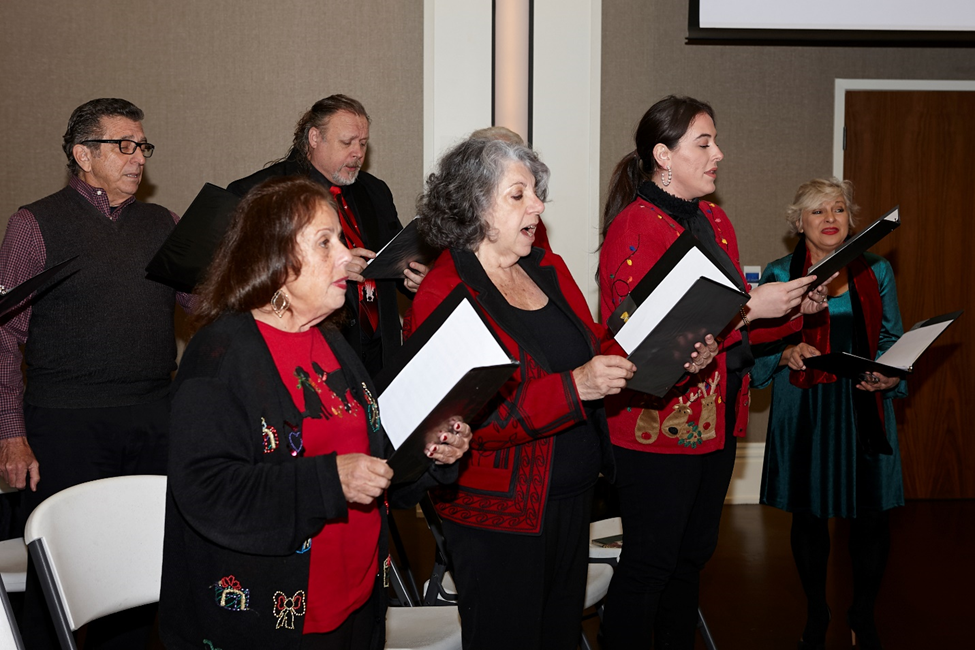 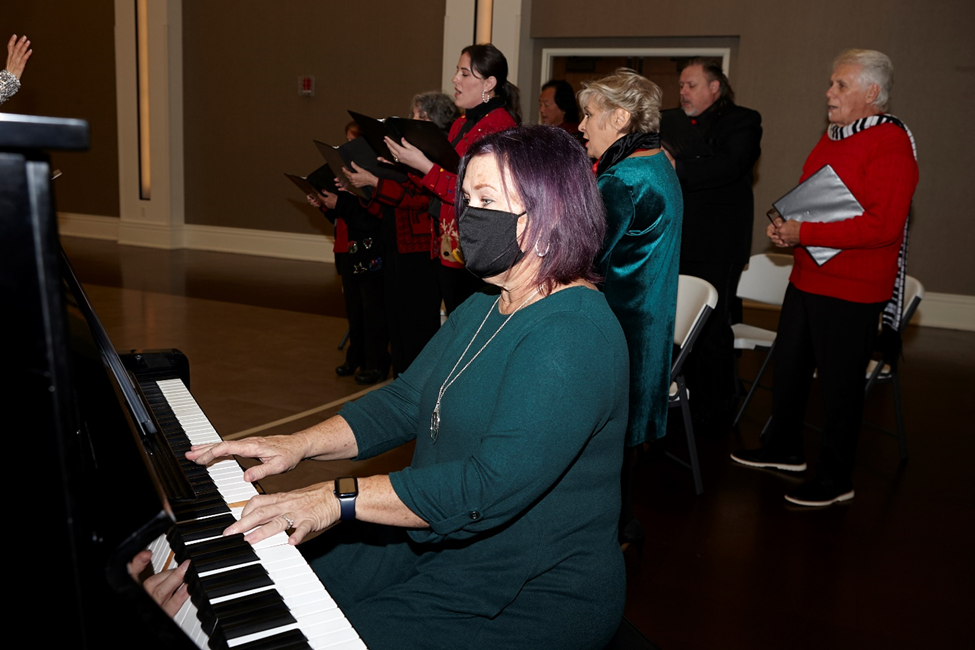 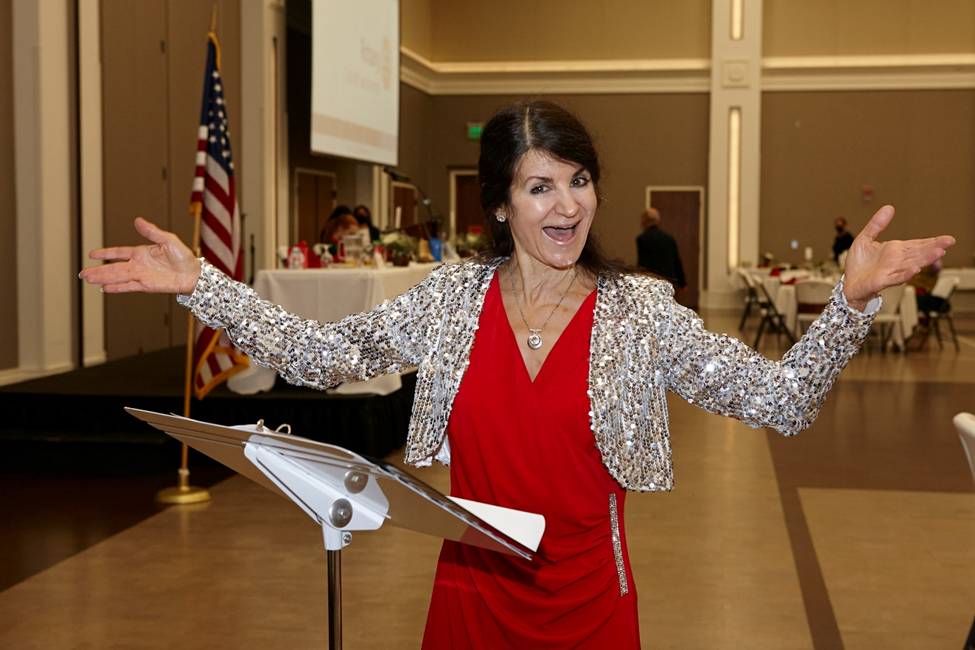 The following four acted as our greeters:
Greeter CLARE JACKSON is the granddaughter of Past President Jim Leet. CLARE is 7 years old and is a 2nd grader at Sacred Heart Parish School. She likes to read, enjoys science experiments and her new puppy, Lucky.
Greeter CLARE HOLDEREGGER LEACH was our second greeter and one of two Sergeant-at-Arms. CLARE is the daughter of CHRISTIE HOLDEREGGER (Volunteers of America/Chief Development Officer). CLARE is 21 years old and is currently attending American River College where she is completing her GE and enjoying her Fashion Design courses.  She plans to transfer to a 4-year university where she will major in Fashion and Entrepreneurship.
Greeter AVERY CANUP, great granddaughter of ART and KIEFIE BREUER, is 5 years old, attends kindergarten and she loves to dance in her dance troupe.
Our final greeter was HENRY SPAULDING, son of MEGAN WYGANT (Claire Raley Studios for the Performing Arts). HENRY just turned 3!  He loves building towers and cooking, dancing and singing, drawing, making new friends, and identifying the letter “H” everywhere he goes.
Sergeants-of-Arms was LIBBY PAVELCHIK. LIBBY is a sophomore at Mesa Verde High School where she plays volleyball and basketball. She also plays the guitar and is a member of the DND (Dungeons and Dragons) and anime club at school.  Her interests include reading, writing poetry, fashion, music, psychology, and film.
ISABELLE JACKSON shared the Thought for the Day. ISABELLE is the granddaughter of PAST PRESIDENT JIM LEET (Boutin Jones Inc.). ISABELLE is 11 years old and is in 6th grade at Sacred Heart Parish School.  She likes to read books on Greek Mythology and play tennis.
PLEDGE OF ALLEGENCE:
MILA REED led us in the Pledge of Allegiance. MILA is the daughter of BOBBY REED (Capitol Tech Solutions). MILA attends Piccolini Pre-School. She loves to draw pictures, play with her older brothers, and meet new friends on the playground. 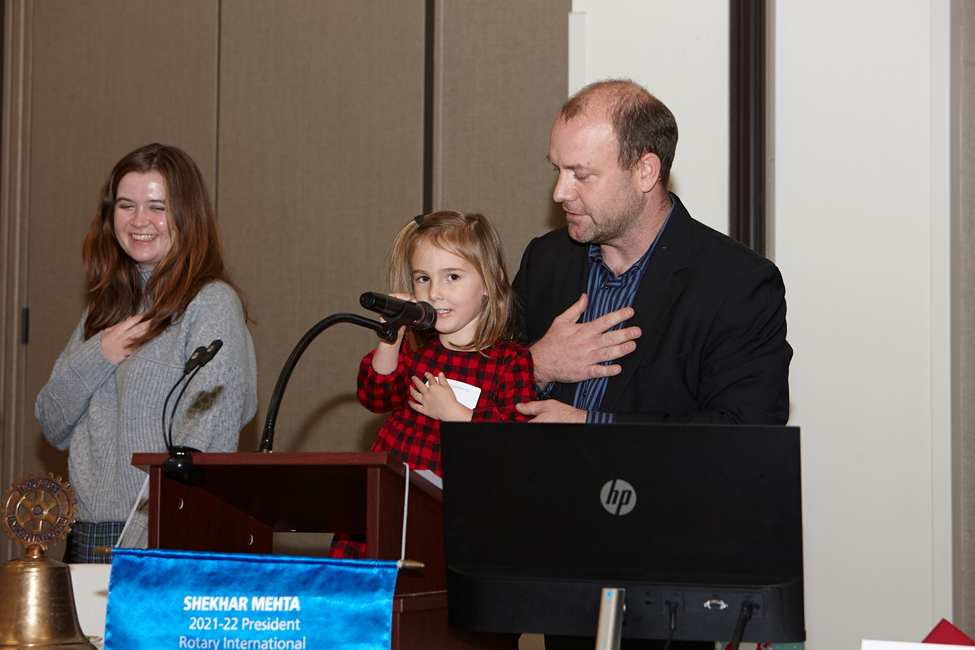 RED ENVELOPE DONATIONS:
For the past few weeks, the Rotary Club has been collecting money for the Salvation Army Toy Drive. Rotarians were able to find red envelopes on their table. This was in homage to the Chinese New Year during which gifts of money are exchanged in red envelopes. 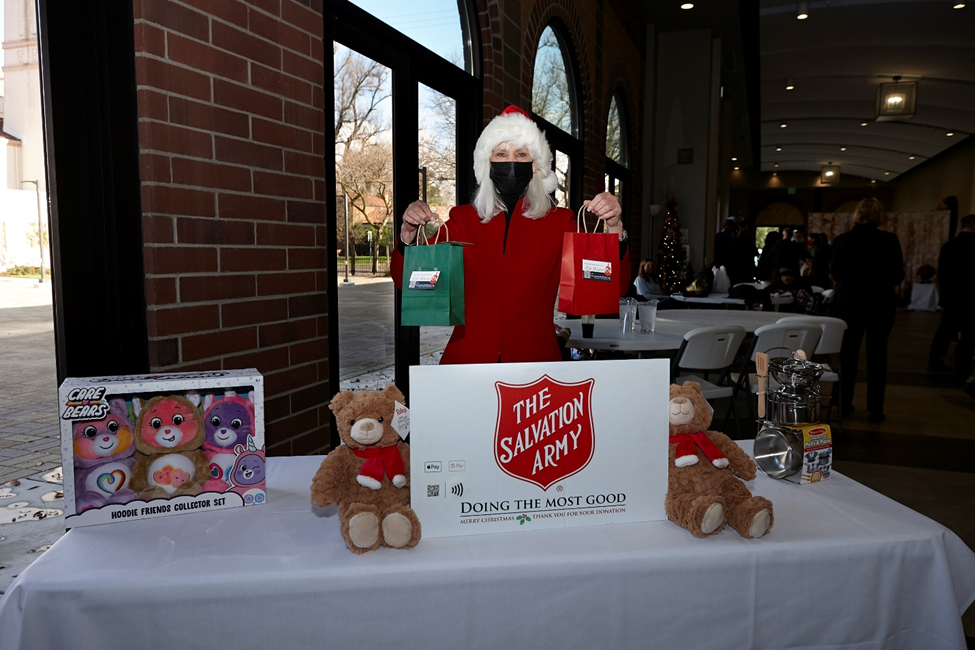 KEVIN WILLIAMS (KVIE) did the honor of creating a wonderful video to celebrate the holidays, filled with family photos sent in by Rotarians. He then encouraged the encapsulation of the memory of Rotary Family Day by pointing families towards the Rotary Holiday Photo Booth. 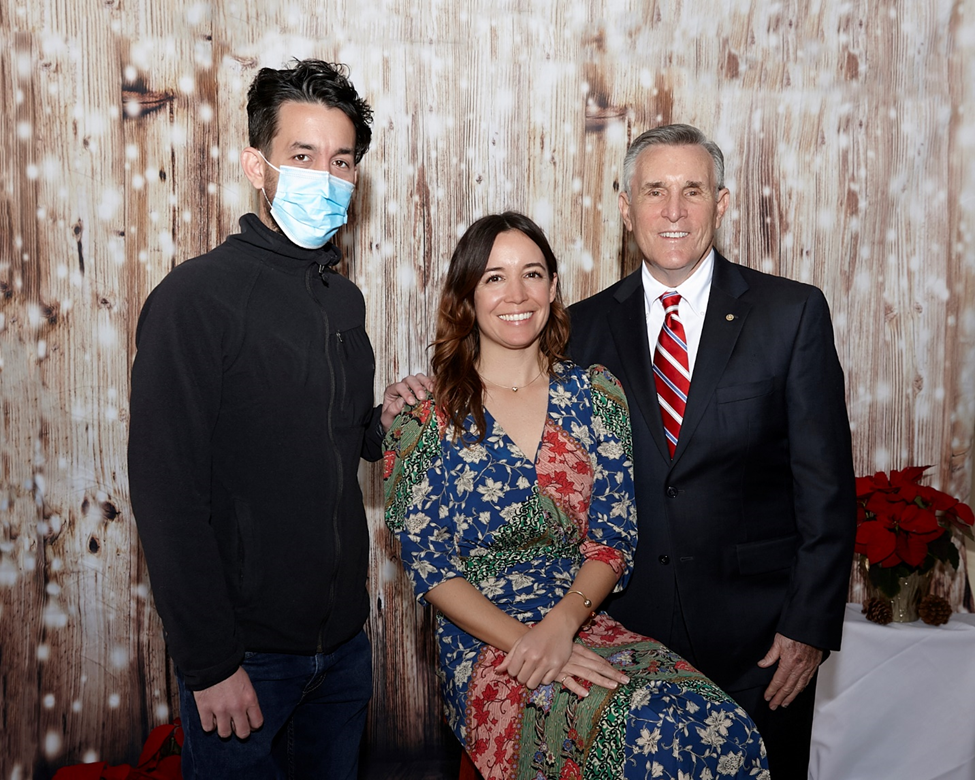 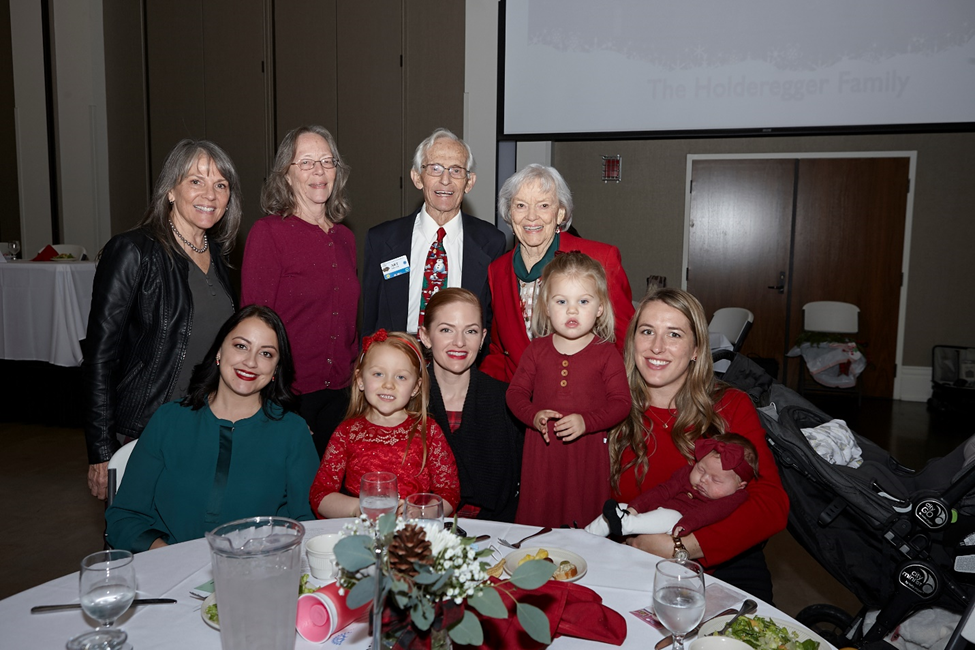 DIVERSITY OF WINTER HOLIDAYS:
From the beginning of November through mid-January, families throughout the world and in our community celebrate more than 30 holidays. Just to name a few are the following:
Hannukah: is the Jewish festival of lights celebrates the rededication of the Holy Temple in Jerusalem after the Maccabean Revolt in 2BCE. As the temple was rededicated, there was only enough holy oil to light the menorah for a single day, but that single day of oil lasted for eight days. Families celebrating light a menorah, play games, and eat foods fried in oil to celebrate that miracle.
Chamos: is a festival of the Kalash people in Western Pakistan, lasting for seven days, including the day of the December solstice.
Yaldā Night: is the Iranian winter solstice festival, where loved ones gather to eat, drink and read poetry, primarily the poems of Divan-e-Hafez.
Kwanzaa: from a Swahili phrase meaning “first fruits” – honors African-American culture. Each of Kwanzaa’s seven nights involves a candle-lighting ceremony celebrating Kwanzaa’s seven principles: unity, self-determination, collective work/responsibility, cooperative economics, purpose, creativity, and faith.
In China, the Dongzhi festival marks the winter solstice following the yin and yang principal of balance
In Japan, families celebrate Omisoka which marks the end of the old year and the start of the new.
ROTARIAN SHARE THEIR OWN FAMILY HOLIDAYS:
After a brief overview of some of the religions that are celebrated in the winter, we had the opportunity of hearing speakers discuss their family traditions.
The first speaker was ANNE AL AZZAWI, daughter of SULAF AL AJEELI (Rotary Membership Services Coordinator).  ANNE immigrated with her family to the United States from Iraq when she was 14. She graduated from Mira Loma High School, went to community college, and later transferred to UC Berkeley. She is double majoring in Economics and Computer Science. She loves to write and loves volunteering for the community. She taught us about Ramadan which is the ninth month of the Islamic calendar, observed by Muslims worldwide as a month of fasting (sawm), prayer, reflection and community. A commemoration of Muhammad’s first revelation, the annual observance of Ramadan is regarded as one of the Five Pillars of Islam and lasts twenty-nine to thirty days, from one sighting of the crescent moon to the next. 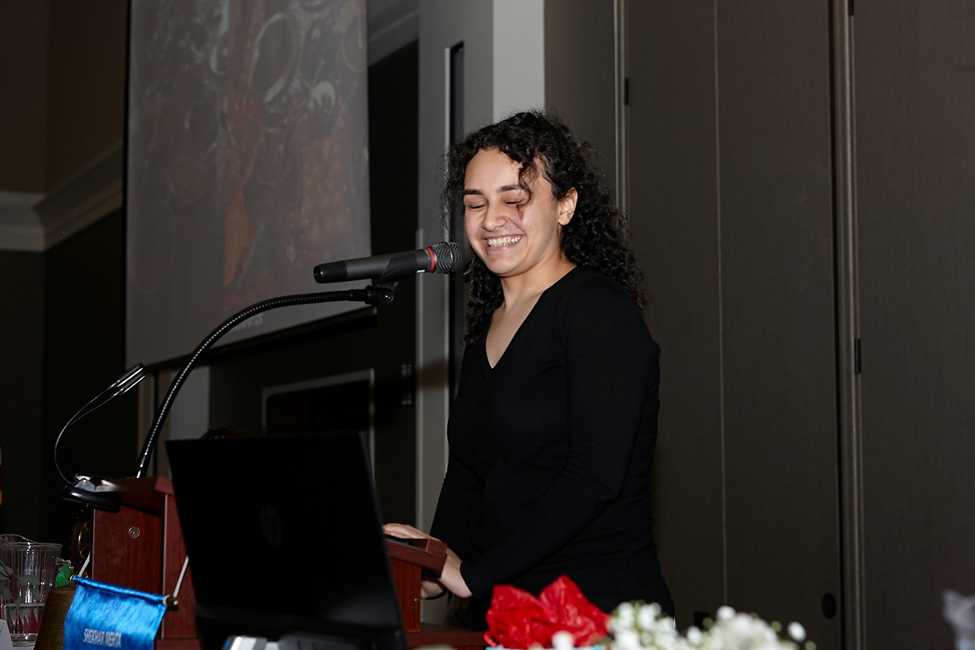 We learned about Diwali from Rotarian SURENDER SINGAL (US Army, Corps of Engineers). SURENDER has lived in California for 50 years. He graduated from San Jose State University with a BS in Physical Education and is now retired. He is busy carrying on his spiritual obligation such as attending to family and grandchildren and helping those in need. He described Diwali as one of the most popular festivals of Hinduism, usually lasting five days. It is celebrated during the Hindu Lunisolar month, Kartika, which is between mid-October and mid-November. Diwali symbolizes the spiritual “victory of light over darkness, good over evil, and knowledge over ignorance.”
Before the next speaker, we had the opportunity to enjoy a performance by the McKeever School of Irish Dance. This school of Irish Dance is Directed by Nicole McKeever.
After the delightful performance of Irish Dancing, PAST PRESIDENT SCOT SORENSEN (St. John’s Program for Real Change) shared Christmas traditions with us. SCOTT has been a member Rotary member since 2000. SCOTT is a Lutheran pastor who has served congregations in California, Texas and Wisconsin.  He is currently serving as the Interim Pastor at Shepherd of the Hills in Vacaville.
GAVEL OUT:
To end the day, BAILEY thanked the wonderful student volunteers who participated in Tuesday’s event and recognize the Rotary Family Holiday Traditions Committee:  Committee Chair, ALLISON CAGLEY (Friends of Sacramento Arts), SARAH HODGE (California State University Sacramento, Director of Development), , CHRISTIE HOLDEREGGER (Volunteers of America), NANCY SMITH-FAGAN (International Bird Rescue), KEVIN WILLIAMS (KVIE), MEGAN WYGANT (CLARA), LATOYA WONG (Rotary Club of Sacramento), and SULAF AL AJEELI for all their help.
WHAT’S NEXT?!
Didn’t get a chance to make it to last week’s meeting? Don’t fret! Thankfully we had JOHN SWENTOWSKY’s amazing photography to help us get a better look. Not to mention, there is still a chance to make it to the next one!
For the next two week will be “dark” for the holiday season, meaning there will be no meeting. We will resume on January 4, 2022 at The Annunciation Greek Orthodox Church from 12:10-1:30 PM just in time for our New Year’s Resolutions!
Upcoming Rotary Meetings at a Glance:
Rotary New Year’s Resolution