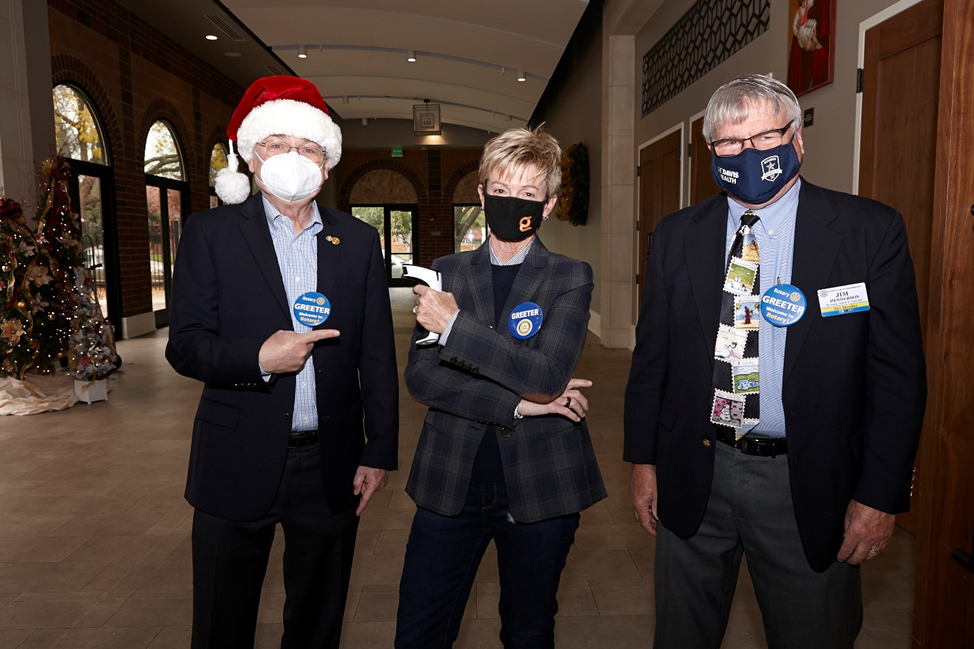 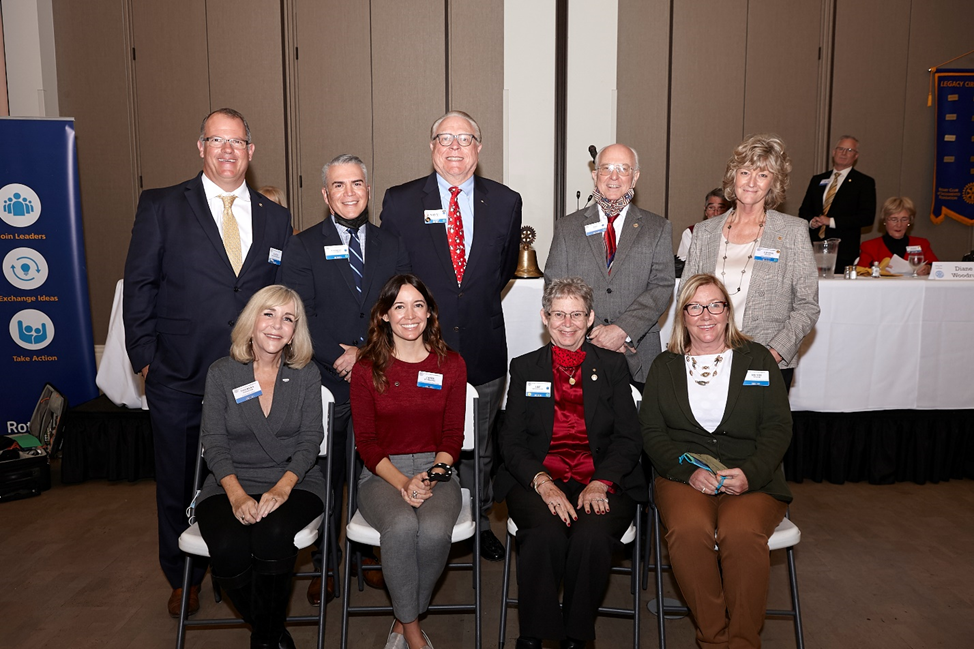 THOUGHT FOR THE DAY:
THERESA WHEELER (Public affairs consulting & voter research) started us off with the inspiring words of Ralph Waldo Emerson in consideration of our leaders for next year. As is so often the case, the Rotary thought for the day provides guidance for us all to consider every day…
“Write it on your heart
that every day is the best day in the year.
He is rich who owns the day,
and no one owns the day who allows it to be invaded with fret and anxiety.
Finish every day and be done with it.
You have done what you could.
Some blunders and absurdities, no doubt crept in.
Forget them as soon as you can, tomorrow is a new day;
begin it well and serenely, with too high a spirit
to be cumbered with your old nonsense.
This new day is too dear,
with its hopes and invitations,
to waste a moment on the yesterdays.”
CLICK HERE to hear THERESA’s timely thought for the day.
MOMENT OF SILENCE:
CLICK HERE to read more about RALPH. 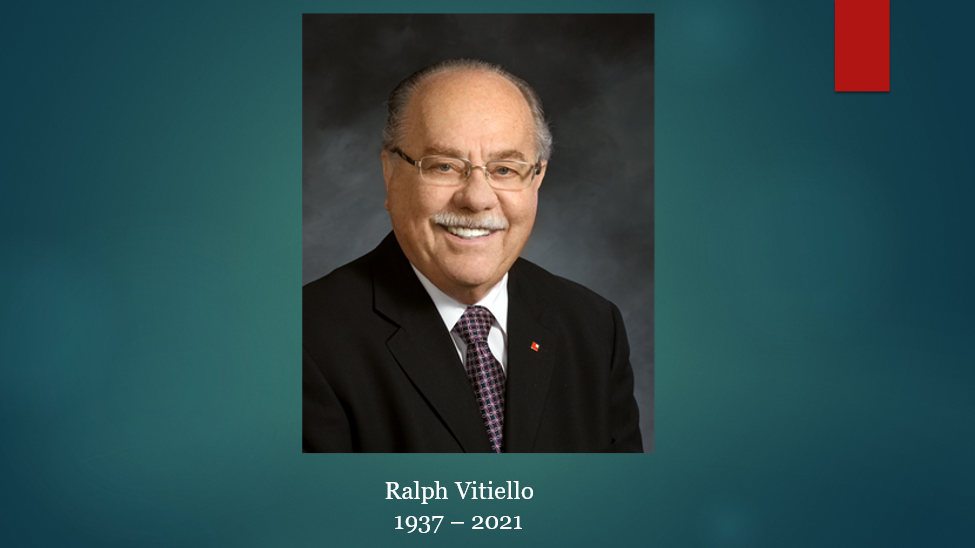 “I know that December 14 will be our club’s first ever Rotary family day. I applaud the change to what has formerly been daughters’ day- for what we do as Rotarians really is all about family. And if there’s any pride to be taken in being a Rotarian, it lives within this realization.
In that spirit, I want to thank PRESIDENT BOB for the recent words and moments of silence he has offered on behalf of “my girls,” Myra and Diane, who both passed away in November. And I thank all of you in this club, members and staff alike. I am moved and humbled by your subsequent generosity and support. And I am honored to be considered one of your fellows.
Myra and Diane were my wife and daughter for nearly half a century. The three of us travelled the world together – not just the Americas, but Europe, Africa, Asia, living abroad for nearly 10 years. We shared a life enchanted by movements through time and space and imagination. We met and saw all manner of people and places. And we delighted together in all there was to share and to see and to learn.
The sun seemed never to set on our travels. Yet the two of them were a perpetual sunrise for my soul.
As are you now, my friends. Thank you again for your generosity and may the sun never set on your travels.”
CLICK HERE to watch PRESIDENT MILLER read this touching acknowledgment of gratitude.
HEAD OF THE TABLE:
Seated at the head table were PAST PRESIDENT DIANE MIZELL, PRESIDENT BOB, PAST PRESIDENT THOM GILBERT (retired Gilbert Associates), and PAST PRESIDENT DIANE WOODRUFF (retired Chancellor California Community Colleges). “We are family. That’s what we’re all about,” said PRESIDENT BOB.
PAST PRESIDENT GILBERT introduced our newest Rotary Fellow, the highest honor that our club bestows, with tantalizing hints: Born in Sacramento, this member’s grandfather was the barber to Ronald Reagan when he was Governor. Married for 34 years, with two grown sons, the member rides bikes and has led the students at RYLA camps on the rope courses. PAST PRESIDENT GILBERT then introduced LINDA GEERY. “I’m blown away,” she said as her family surprised her with their appearance. “It’s a great day.” 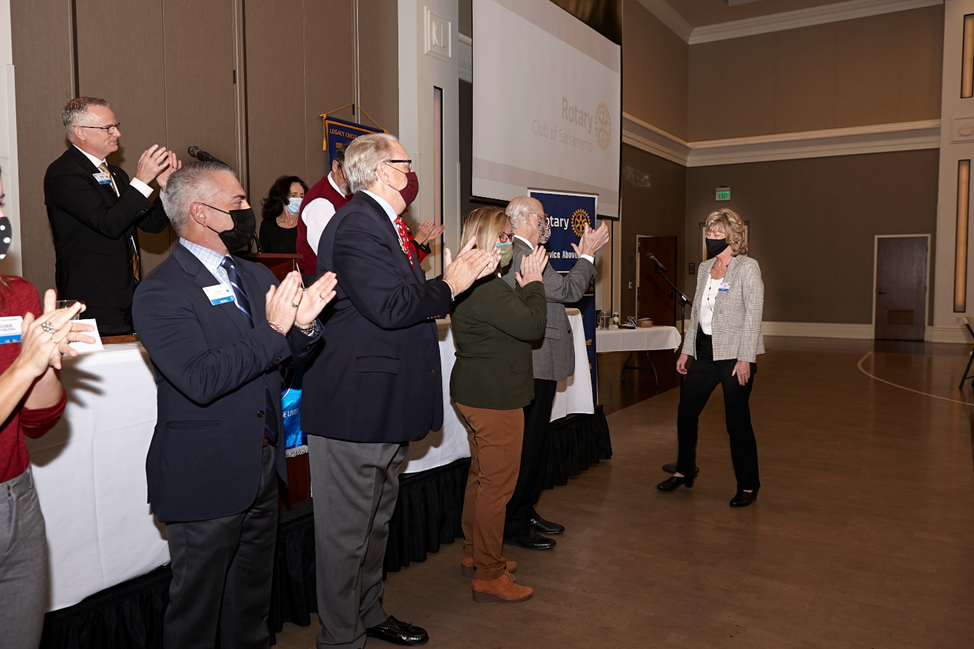 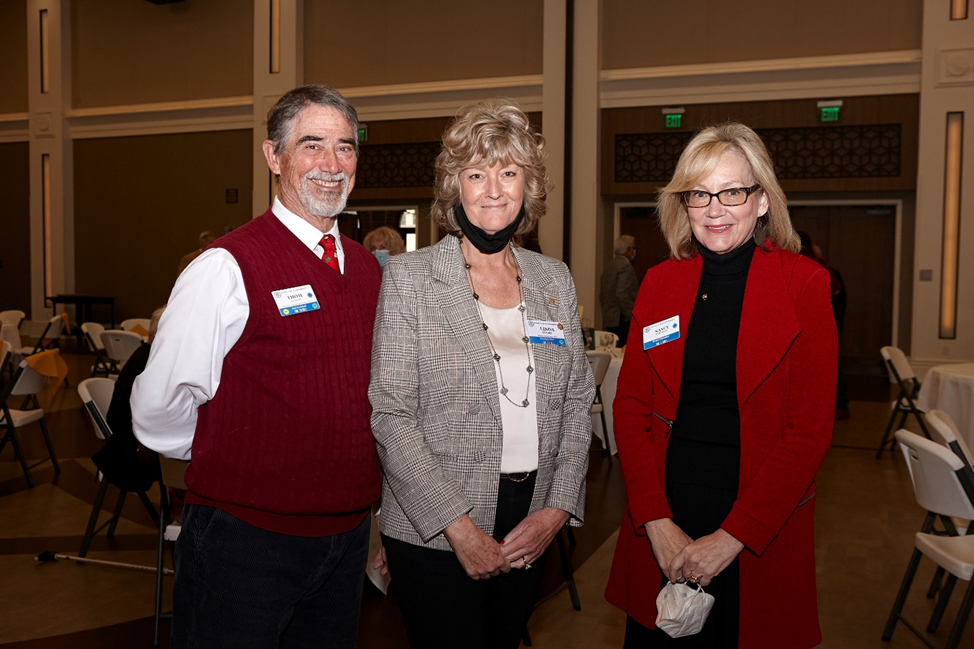 Then it was time for PAST PRESIDENT WOODRUFF to surprise members with the announcement of the incoming President Elect Nominee for the 2023-2024 year. She led with the following hints: An avid skier since she was two years old, this member also played LaCross and is a big sports fan. After working all over the country, this member finally claimed Sacramento as home and serves on many community boards and has recruited many major sponsors for our fundraising events. PAST PRESIDENT WOODRUFF proudly introduced TODD KOOLAKIAN (Sacramento County Children’s Home) PRESIDENT ELECT for the 2023-2024 Rotary term.
PRESIDENT ELECT KOOLAKIAN said it was a “huge surprise” when six (6) past presidents arrived at his office to give him the big news. He said he was blown away by their confidence in him. Proud of our club’s impact both locally and internationally, he thanked the many past presidents who offered him counsel on becoming President Elect Nominee. He introduced his partner, Dr. Mark Heller, who walked over from Sutter Health to the club’s luncheon meeting in his green hospital scrubs.
The newest Rotary member was introduced by CHRIS ANN BACHTEL (Retired). MAJOR JOHN BRACKENBURY is Divisional Commander for our region of the Salvation Army. Besides helping the poor, he enjoys LEGOs and his wife’s baking. 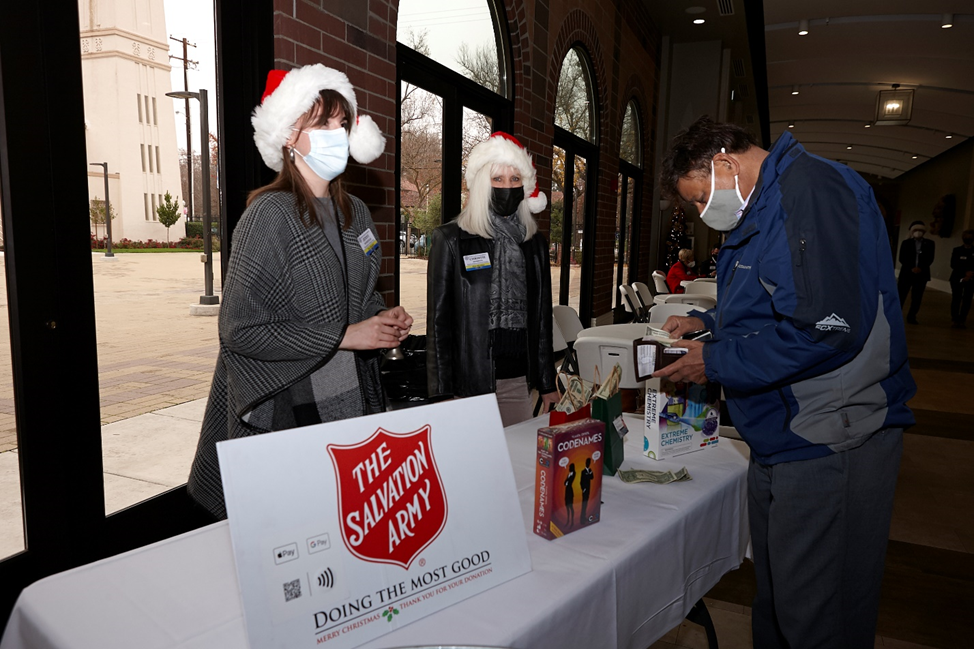 COMMITTEE SPOTLIGHT:
PRESIDENT BOB has featured the work of our committees during his term and at this meeting, he focused on our RYLA (Rotary Youth Leaders Awakening) camp for teenagers.
PAST PRESIDENT GILBERT said the committee needs members to work as “learning facilitators,” during the five-night camps offered three times a year and serving 300 to 400 teenagers.
“This will shake your foundation,” said PAST PRESIDENT GILBERT who has volunteered at the camps. RYLA teaches mostly high school juniors leadership and communication skills to go back to their schools and be leaders during their senior years. “These youth are the future of our community,” he said. Our club’s RYLA program won praise nationally for its focus on conflict management, self-esteem, and the problem solving strategies that the teenagers then share at their schools.
ANOUNCEMENTS:
In club announcements, JOHN SWENTOWSKY asked for volunteers to ring the bell for the Salvation Army and serve meals at Loaves & Fishes; MIKE MIKLAUS (Real Estate Financing) invited members to a fireside at his home on Thursday; ALLISON CAGLEY (Arts Education) urged members to sign up for Family Day on December 14, and reminded us that clean up on the American Parkway will be on December 18th.
LETS GO ON A RUN!: 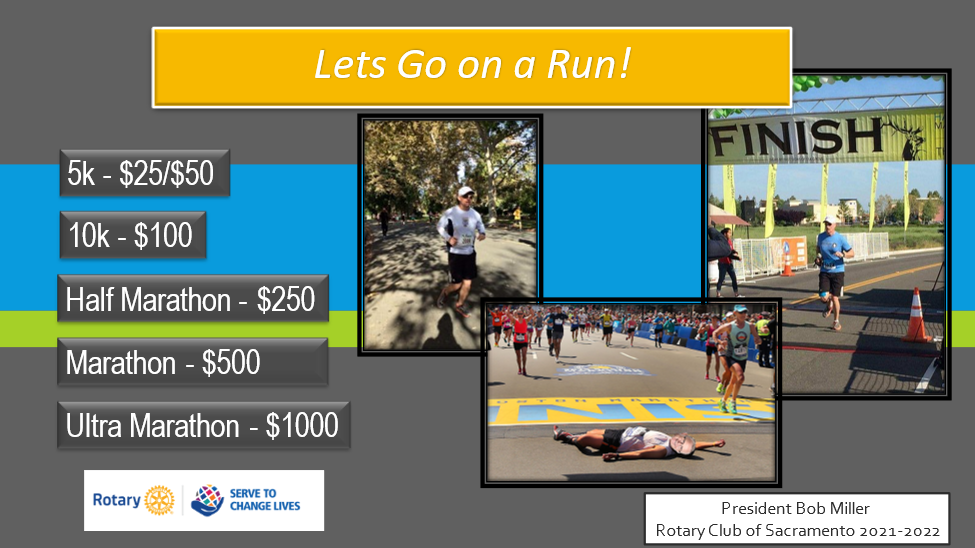 Lets Go on a Run took in lots of money for our charitable efforts. This served as the last segment of the day, but certainly not least! Many Rotarians showed their appreciation by giving very generously.
NORM MARSHALL (Headwaters Building Group) was featured in Comstock’s Magazine for his plans to sell his partnership to a younger person as part of his succession plan. He contributed $500 although he has yet to receive a payment from his successor. 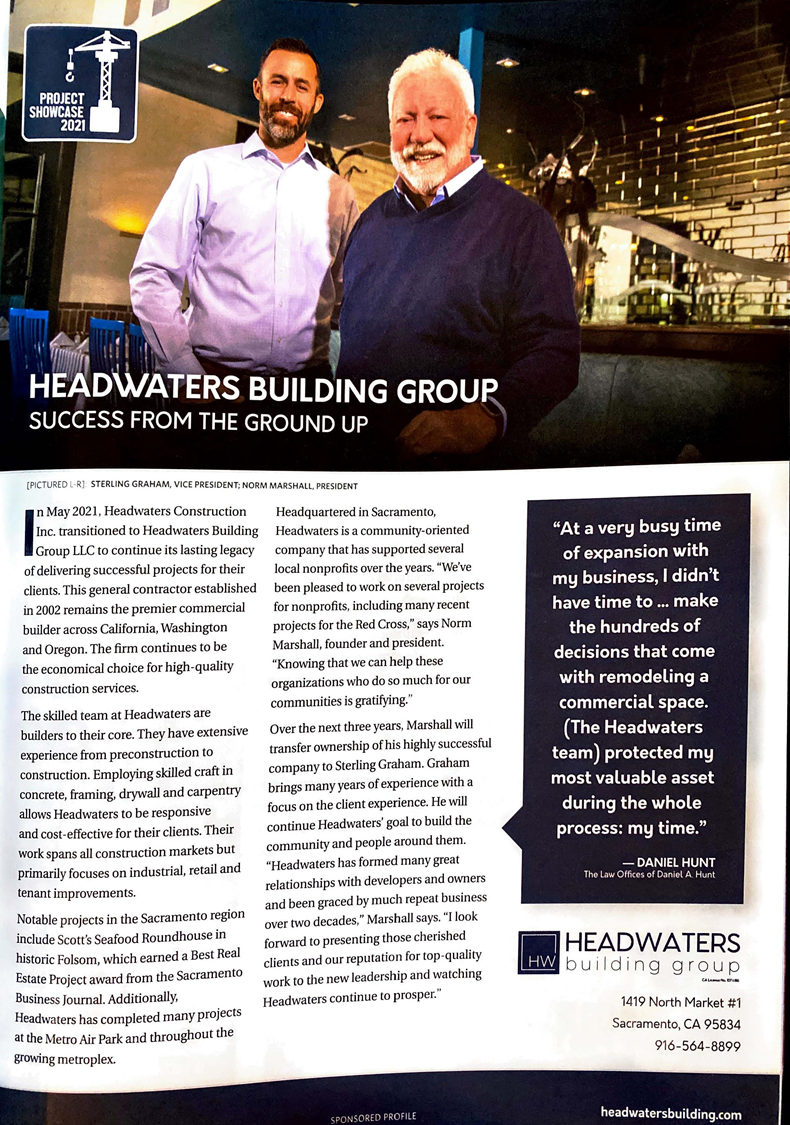 JOEL HOCKMAN (Pucci’s Pharmacy) was featured in the magazine’s recent edition for reaching out to the African-American community on health issues. He contributed $500. 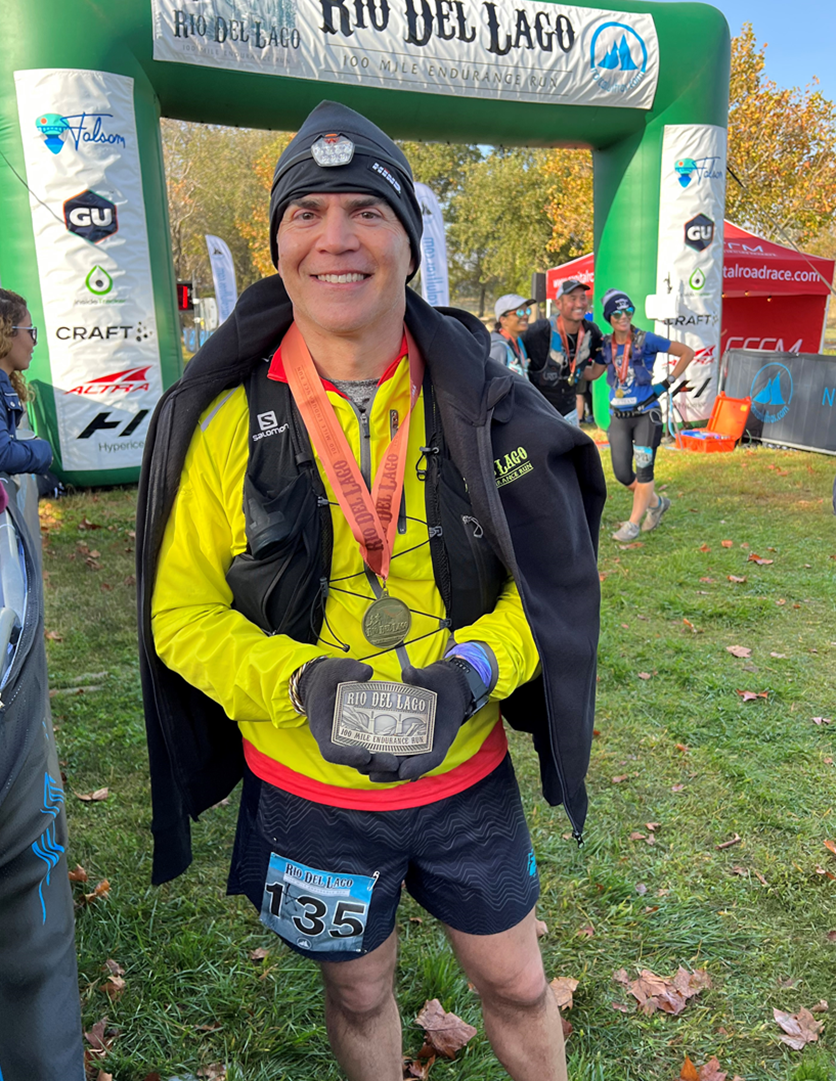 KIEFIE BREUER (retired historical guide) had a grandson in the same race and he finished first, jumping over the finish line rather than through it. The BREUERs also welcomed a fourth great-granddaughter and donated $100. 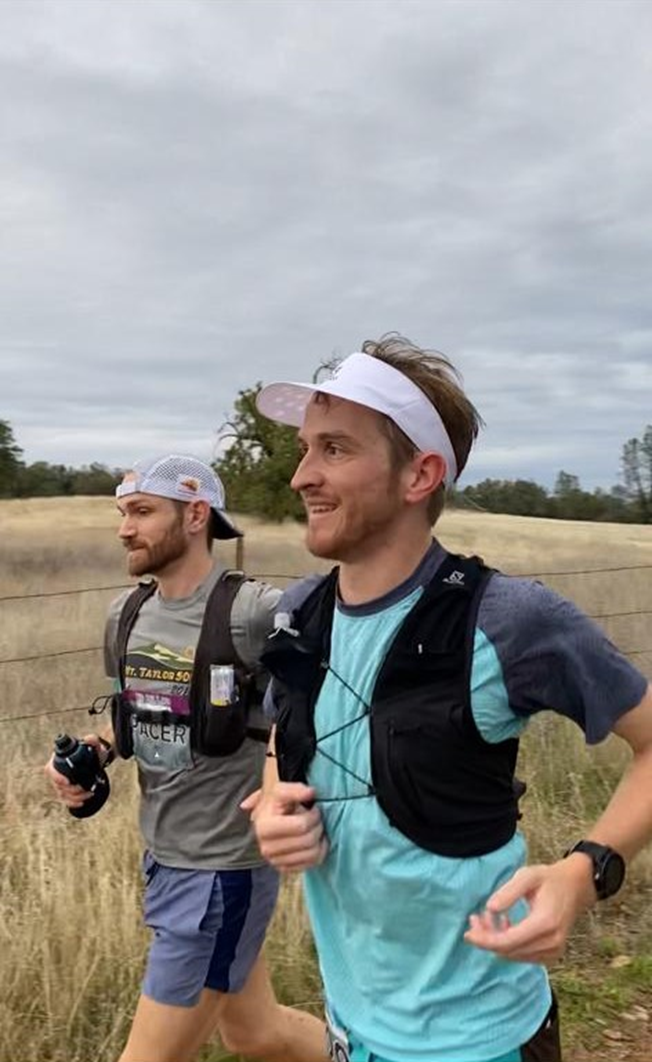 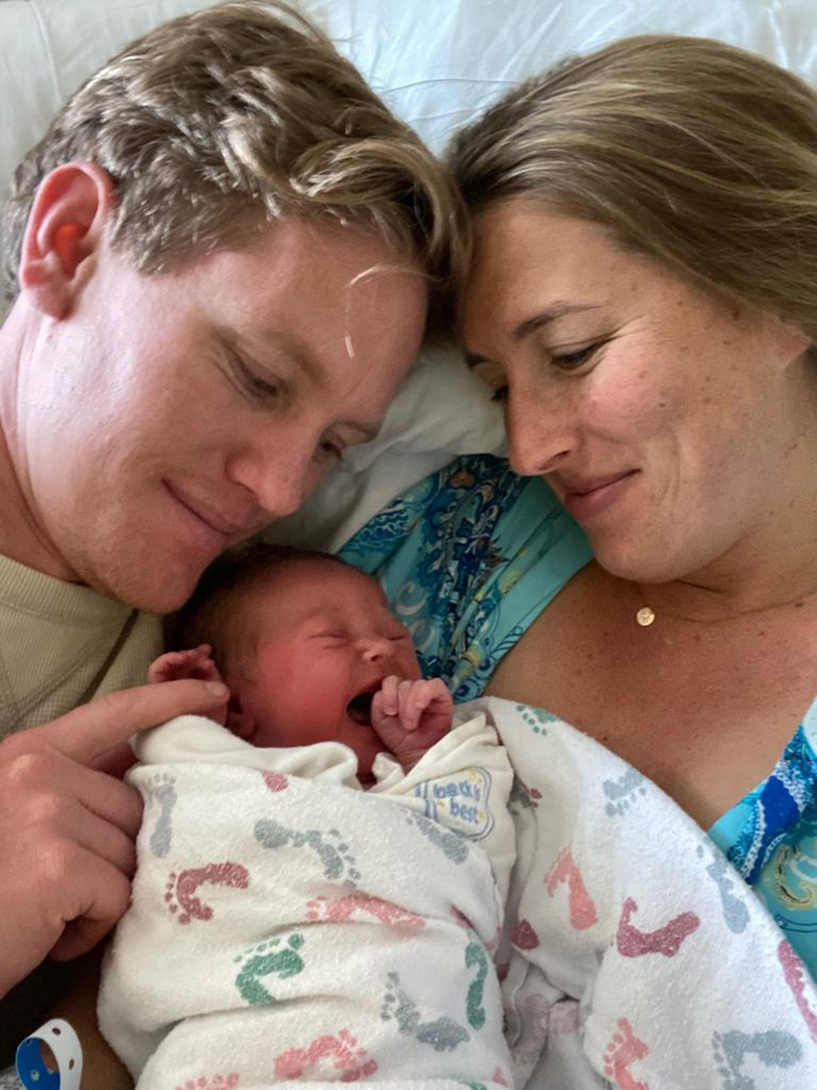 ELFRENA FOORD (financial planning) announced her official retirement from her job and contributed $1,000 to the club. In her free time now, she will help run her grandfather’s charitable trust, the Arata Brothers, which has given $16 million to nonprofits in Sacramento.
Lastly, PAST PRESIDENT WALTER DAHL (bankruptcy law) noted that Tuesday was the anniversary of the attack on Pearl Harbor. He recounted how a late member of our club, Glenn Sorensen, who was a pilot stationed at Pearl Harbor, raced to get to his plane to defend the sailors. When he returned to his car later, he discovered that the Japanese fighters had staffed his car with three bullets which he kept and showed to PAST PRESIDENT DAHL. He contributed $100.
A big thank you to all the Rotarian who participated in our annual meeting and to those who decided to donate! Our annual meeting ended in a great success!
WHAT’S NEXT?
Didn’t get a chance to make it to last week’s meeting? Don’t fret! We have a recording of it HERE. Not to mention, there is still a chance to make it to the next one!
Next week we will be meeting at The Annunciation Greek Orthodox Church from 12:10-1:30 PM. Our next meeting will be Family Day! You won’t want to miss it!
Upcoming Rotary Meetings at a Glance:
New Year’s Resolution