Becki Roberts (Valley Community Bank) provided an inspiring reflection on the role of Rotary in taking on the fight against polio and getting us ever nearer the finish line – investing $1.9 billion and countless volunteer hours in the pursuit.

President Jim led the club through the Pledge of Allegiance 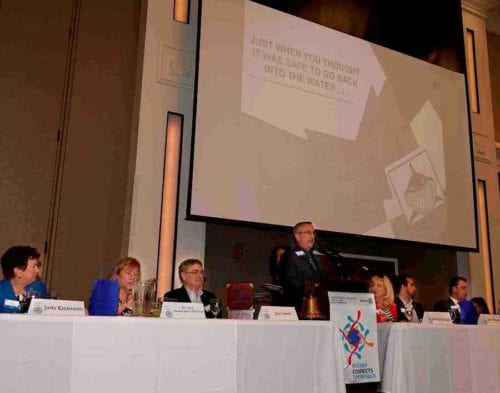 As the Theme from Jaws established a sense of foreboding in the crowd, Past President David Cohen (Cohen & Durrett) assumed the microphone to share the news that it will soon be safe to return to the water, as Cohen & Durrett is merging to become a larger firm, now named: YOUNG MOLOHAN COHEN & DURRETT, LLP. Past President Dave introduced new law partner Jill Molohan, and congratulatory cheers ensued.

President Jim called Brandon Montalvo forward to introduce our newest member, Sam Peters. Sam has a variety of useful expertise, including archery (perhaps a future Sgt. at Arms?) and tailgating (the pre-game kind, not the ride-your-bumper kind), AND he brings down our average age, having nudged Brandon aside as our new youngest member. Sam was warmly welcomed to the Club. 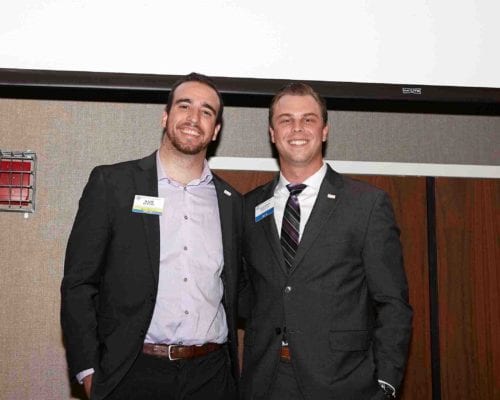 After showing a special video on Rotary’s role in combatting polio, President Jim lightened his own wallet of $500 and invited others to make their own gifts, which will be matched multiple times over – every $1 is matched by up to $7 from other sources, including Rotary International, the Bill & Melinda Gates Foundation, our District funds, etc. Others from the club chimed in as President Jim called out names from the podium – in about two minutes, more than $4,000 was raised – which, with a 7x multiplier means more than $28,000 in the final push to eradicate polio. This was a great moment to be a Rotarian.

April Javist (Sacramento Public Library Foundation) encouraged additional Rotary participation in the Walk 4 Literacy coming up this weekend – still time to join us in support of the important cause of childhood literacy in Sacramento. Kathryn Herrfeldt (Home Care Assistance) urged members to consider nominating a fellow Rotarian for the Jeannie Runyon Award, and noted that the nomination form is on the club website. Buddy Hubbert (Mother Lode Capital) encouraged any Rotarians interested in starting or improving a business to attend the Entrepreneurship Fireside event on Nov. 6 at the Sutter Club. Past President John Lemmon (Knox, Lemmon & Anapolsky) encouraged all veterans to attend the November 5th Rotary Meeting, at which the club will honor all its veterans. They have been working on this event for some time and it will be a terrific opportunity to honor veterans.

Chair of the Day Judy Kjelstrom recited a remarkable list of our speaker’s expertise and experience working in the world of polio and post-polio syndrome. Judy encouraged a warm welcome from the club to speaker Dr. Carol Vandenakker-Albanese.

Dr. Carol Vandenakker-Albanese has expertise in diagnosing non-operative spine issues, working with those with polio and post-polio syndrome. She provided a history of polio, which has existed for thousands of years, yet appears to have only reached epidemic proportions in the late 1800s, counterintuitively, with the arise of better public hygiene. Polio is transmitted through touch, bodily fluids, and waste, and once humans were no longer exposed to these persistently at low levels, we no longer built immunity to the virus. Dr. Vandenakker-Albanese noted how much of a public health threat polio was in past decades and how much that threat drove research both into care for those who got the disease, as well as into means of combatting it. Drs. Jonas Salk and Albert Sabin were vying to be the first to find a means of presenting polio’s spread. Dr. Salk came up with an injectable vaccine in 1955, and Dr. Sabin an oral vaccine in 1961. While these vaccines protected millions, especially in wealthier countries like the US, it also had the unintended consequence of making those living with the disease to be largely forgotten. However, polio groups banded together and advocated for continued care and attention – this group was largely responsible for the passage of the Americans with Disabilities Act in 1990. She further noted that many of those living with ‘managed’ polio, in more recent years, have begun suffering from post-polio syndrome, which was erroneously interpreted to be signs of aging, however, this was not the case. Dr. Vandenakker-Albanese concluded with thanks to Rotary for its efforts to date reducing the spread of polio but noted that it will never truly be gone as a threat to the world until it is utterly eradicated.

Sgt.-At-Arms John Wood announced that our meeting next Tuesday will be at the same location, with a summation and celebration of the success of the Sacramento Century Ride.