President Jim Leet (Boutin Jones Inc.) called our meeting to order. Extending a warm Rotary greeting were Norma Farr (Fidelity National Title), and Linda Geery (Gilbert Associates, Inc.) John Swentowsky (Swentowsky Photography) had the members in his sights at all times. Mike Bullington was the wine sponsor, with an assist from Dick Osen and Dan Fenocchio (Cunningham Engineering). Bobby Reed (Capitol Tech Solutions), encouraged us with the Thought for the Day. 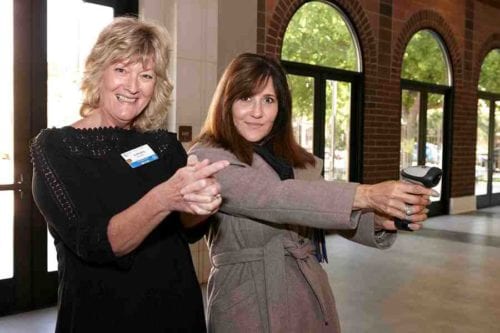 Our beloved Bonnie Plummer (National University / Sanford School of Education) sponsored the meeting and donated her time to the Ground and Field Theater Festival with UC Davis.

Our esteemed speaker was Markos Kounalakis, a Hoover Institute Fellow and the husband of California Lieutenant Governor, Eleni Kounalakis. He was the guest of proud Stanford graduate and immediate Rotary Past President Diane Woodruff. One need not wonder long if there is some kind of Cardinal connection between the two, although Markos nevertheless received his undergraduate degree from “ahem” Cal.

The Mr. Kounalakis prefaced his presentation with a commendation for Rotary in its local and international roles. He acknowledged of the 70th anniversary of the founding of the Republic of China. He described in a slightly foreboding tone the ceremonies that took place in Tiananmen Square framing the relevance of the topic he was about to explore.

Our speaker explained that the President exercises almost sole control of policy in the international sphere. He declared that the President deserves accolades for his role in creating better relations with North Korea. He credited the President’s ability in personal politics as a key component in the process. At the same time, Markos expressed disappointment at the lack of a diplomatic next step that would build on our initial success and result in a greater likelihood of peace that would affect the interests of neighboring countries. 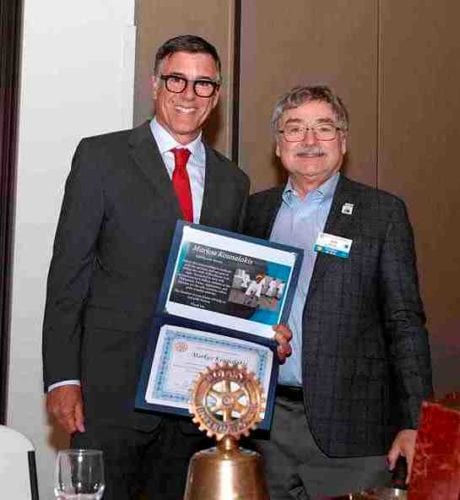 Next he extolled the President’s success in creating a bi-partisan awareness of China as a competitor. He explained the National Security Strategy’s posture toward both China and Russia as vying against the US for leadership in an interdependent globalized world. On the flip side, he was critical of the single-minded approach of using tariffs to put us on a more balanced footing.

Praise was again forthcoming for the President’s strong focused efforts to end the war in Afghanistan, the longest in our nation’s history. Mr. Kounalakis believes that this president is close to accomplishing a promise that neither of his predecessors had been able to fulfill. However, he expressed concern that we are not laying the groundwork for establishing an infrastructure and lasting peace after the opposition has been vanquished. He doesn’t see Mr. Trump as a consensus builder among other nation states that could be helpful to us in achieving lasting peace in the region.

Mr. Trump was given credit for being the first president since Reagan in 1988 (amnesty) to “bring to the fore” the issue of immigration. However, he received a negative mark for depending on the simple solution of building a wall to solve a complex problem, a recurring theme in Markos’ presentation.

The President received kudos for an energy policy that sought improved relations with the Saudis, upon whom we still depend for oil. At the same time, he was criticized for becoming an “apologist” for their behavior, no doubt a reference to the murder of journalist Jamal Khashoggi almost a year ago.

Markos complimented Mr. Trump’s ability to engage in dialogue with the Russians, however faulted his lack of progress in working with Vladimir Putin, citing that sometimes the President is his own worst enemy.

Markos complimented the Administration for taking a strong stance against Iran with economic sanctions. However, he wondered whether a confrontational approach would end in peace or conflagration. Finally, the speaker gave high marks to the President for understanding and articulating the importance of America’s foremost place in the world, as typified by the slogan “America First.” However, he faulted him for an approach that was, in his opinion, divisive and inhibited us from expressing our leadership with a single unified voice.

Rotarians were reminded for the last time about the upcoming Sacramento Century this Saturday, which has already raised over $150,000. An amazing legacy of success and generosity. April Javist of the Sacramento Library Foundation announced the upcoming Walk4Literacy on October 26 http://walk4literacy.org/.

Once again, President Jim Leet, lavished the membership with ample time to fellowship, perhaps THE trademark of his presidency, and consistent with his “We Are Family” theme song. Much appreciated President Jim!

And that folks is your meeting in review! Have a great Rotary day.