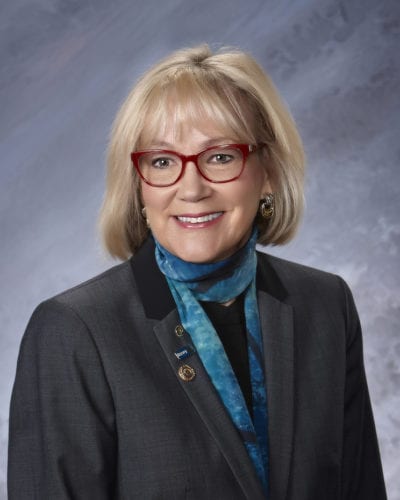 For years, I was a Rotary freeloader, attending as the guest of my husband, Fred, or my father- in-law Henry. As a newspaper reporter, I wasn’t allowed to join organizations since it might be seen to influence bias in our coverage. So journalists aren’t joiners. Because we are professionally neutral, we only observe, not participate.

When Fred became President, I made it a priority to attend as many of his meetings as possible to support him in a role he took very seriously and enjoyed immensely. The people I sat with became more than just friendly faces, learning their varied interests personally and what service projects they favored.

After I retired from the Sacramento Bee, Henry oﬀered to pay for my membership if I would like to become a Rotarian. Thanking him for the kind oﬀer, I jokingly asked why should I join when I attend for free with him and Fred and I don’t have to serve on any committees. Plus, I am introduced and applauded by the sergeant-of-arms at each meeting.

When Fred had plans to deliver dictionaries, I was babysitting our grandson and suggested we join him. We orchestrated a grand presentation, I would put the book plate on the dictionary, hand it to 7-year-old Matthew who would then give it to his grandfather Fred. In his dark suit, Fred shook each child’s hand with the presentation of the dictionary. It was very moving when the children always ask, “Do You mean we can take these home?”

Once Fred was District Governor, my understanding of Rotary’s reach and community involvement deepened. Even if it meant getting up at an absurdly early hour, I often went with him to visit clubs in the district. Those friendly faces then became mean more than just pleasant lunch or breakfast companions. I learned more and more about what other Rotary clubs were doing and how interesting and fun they members were.

At the end of Fred’s District Conference, I announced that I would oﬃcially become a Rotarian. He was surprised and delighted. For me there was not one “moment” when I felt I wanted to belong, but a slow understanding of all the good that Rotary does in our community and the world. Fred and I still deliver dictionaries and literacy has become a passion.

And, good works are done by good people whom I am proud to have as my friends.