Our wines were provided by our club sommeliers, PAST PRESIDENT BEVERLY BRAUTIGAM (Brautigam Financial Services) and PAST PRESIDENT HAL BARTHOLOMEW (Bartholomew & Wasznicky LLP.) BEVERLY and HAL brought their professional winemaker, CHRIS MORA (Christopher Cellars.) Shouldn’t our club provide us all with a personal winemaker? 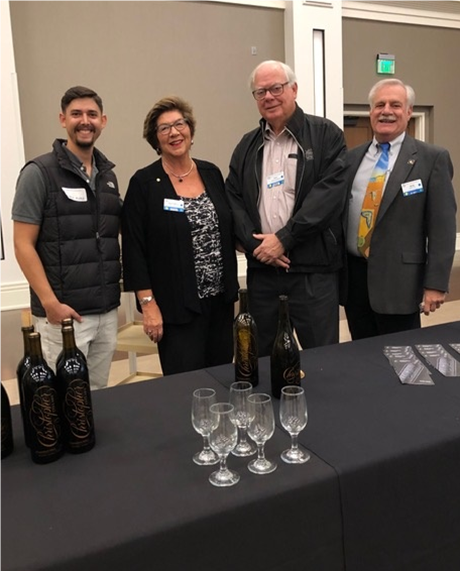 The wines serviced were critically acclaimed and highly sought after vintages from CHRISTOPHER CELLARS, which is located at 9654 Bradshaw Road in Elk Grove, and is a wonderful location for events (as this reporter can confirm) and tasting. For more information, see https://www.christophercellars.com/.
Our THOUGHT FOR THE DAY was provided by CHRISTIE HOLDEREGGER (Volunteers of America) who reminded us that November is Native American Heritage Month–an annual month-long celebration when we all come together to honor and celebrate the culture, traditions, history, and contributions of American Indians and Alaskan natives.
Though native Americans make up about 2.5% of the total U.S. population, their history and contributions are of critical importance to the nation’s history. Unfortunately, much of this history was forgotten or overlooked.
As a result, misconceptions and ignorance surrounding Native peoples and Native culture can lead to the perpetuation of harmful, misinformed “celebrations” – especially surrounding heritage month and Thanksgiving holidays. November is an opportunity to grow our understanding of Native culture, and traditions, and how historical traumas like colonization and genocide have impacted Native peoples throughout history- and still do today.
This month, she said, it’s important for each of us to remember the entirety of our nation’s history- including and especially the history of Native Americans, and the systemic issues they still face today, and take supportive, uplifting action to right historic injustices.
CHRISTIE wanted to share a few pieces of history and facts.
In particular, CHRISTIE noted that Sacramento is the ancestral homeland of the NISENAN, MAIDU, MIWOK and ME-WUK peoples, who are the Indigenous Peoples of this land and have lived here since time immemorial.
So in celebration, CHRISTIE encouraged all Rotarians to learn something new about the native people of our area.
PRESIDENT LINDA GEERY welcomed the following guests and thanked their sponsors.
We all began our Rotary adventure as the guest of a current Rotarian. Please consider bringing a guest to introduce others to the best Rotary Club in Sacramento or California.
Our meeting sponsor was PAST PRESIDENT KEVIN SMITH FAGAN (Fairytale Town.) KEVIN announced the construction and opening of the new Story Center in Fairytale Town. Click here for the Story Center Full PowerPoint Presentation. The new Story Center is located on the Crooked Mile. The Crooked Mile is evidence of your Rotarian contributions in action.
NEW MEMBER INTRODUCTION
Our own TODD KOOLAKIAN (Sacramento Children’s Home) announced our newest Rotarian, DOUG STEPHENSON of Banner Bank. DOUG was sponsored by TODD and PAST PRESIDENT DIANE WOODRUFF. BANNER BANK was also the Elite Sponsor of the Sacramento Century. DOUG has been a resident of the greater Sacramento area since June of 2019 when he was transferred by Banner Bank into the role of Divisions Director of Commercial Banking for the greater NorCal market. DOUG and his wife of 33 years are now residents of Roseville but his offices are near Sac State/ University Village.

He was first introduced to Rotary when in middle-school he spent a few summer weeks with his grandfather on his cattle ranch in Olathe, KS, and every week around 10:30 would come in from the fields, get clean and dressed up, and head into Olathe for the weekly lunch meeting of the Rotary Club. Years later, now married with 3 children and living on Bainbridge Island, WA, he connected with the local Rotary club as a volunteer at its annual fundraiser, a 14-acre rummage sale and auction. It was a true family volunteer effort, and for two weeks he spent most of his waking, non-work hours at the school accepting donated “treasure” and preparing for the 5 hour-sale. This event has been put on by the local Rotary club for the last 60-years and this summer’s sale (2022) generated over $700,000 in sales that, in turn, is used to fund a variety of community projects.
His “volunteer’ status at this annual event soon turned into prospect, and subsequently, membership to the Bainbridge Island Rotary Club. DOUG was a member of that club until 2010 when job demands and the banking crisis dictated he step back for many volunteer board civic roles.
On a personal level, DOUG has been married to ALYSON for over 33 years and they have 3 adult children(2 sons and 1 daughter- all now married) and two beautiful granddaughters, ages five and two. He enjoys cycling, paddle boarding, hikes and spending time with friends and family. They are active in their church and strong supporters of the men and women in military service, as both sons have served and one continues to serve in the Air Force.
ROTARIAN SPOTLIGHT 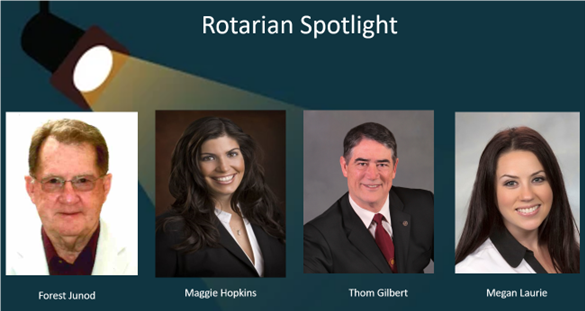 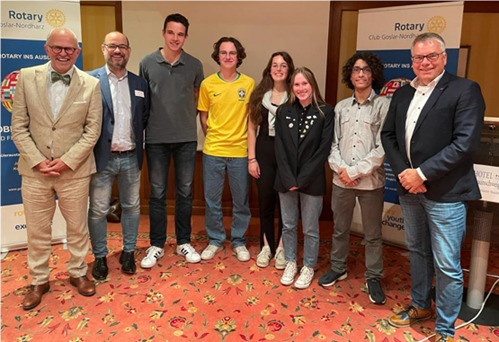 CLUB ANNOUNCEMENTS
BOB ROSENBERG (Inve$tnet Inc.) noted that our International Service Committeep has developed unique skills for running water projects. We all take the access to clean water for granted, but in many countries, woman in particular cannot work or go to school because they must carry water for miles for their family’s home and use.
Our International Service Committee now needs more Rotarians to help with these critical services. Rotarians can travel, see the world, and learn the best practices for water sustainability. Get your passports ready and contact BOB ROSENBERG (Inve$tnet Inc.) or CLAYTON LEE (C.K.L. Trust) for more information on how you can help.
YOU’RE A GEM FOR GIVING
GUEST SPEAKER INTRODUCTION
JARRETT OSBORNE-REVIS (Buchalter law Firm) introduced the speaker, MIKE TESTA, the President and CEO of Visit Sacramento, who leads a talented team that’s dedicated to promoting Sacramento as an attractive travel destination, while enhancing Sacramento’s image as a dynamic place to live and work. 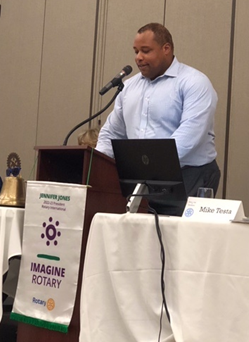 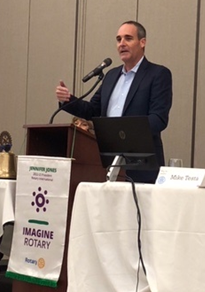 Through MIKE’s vision, community collaboration and consistent innovation, Sacramento’s identity has evolved from a sleepy Gold Rush town to a relevant food destination, recognized nationally as America’s Farm-to-Fork Capital. MIKE’s ability to see Sacramento’s heritage and re-imagine its identity as a food and agriculture leader has brought millions of dollars in both revenue to local businesses and earned media exposure for the City and County. He also partners with music festival promoters to bring a diverse list of large-scale festivals to Sacramento- including Aftershock and the Golden Sky- to further develop the region as a leisure destination. Through the IronMan and other events, he also has helped increase overnight visitors to the Sacramento area. MIKE regularly serves as a tourism expert for industry panels and media outlets across the country.
MIKE TESTA
Visit Sacramento focuses on bringing visitors to come, spend and go home! Visit Sacramento encourages:
Tourism in the Sacramento Regions is a $4 billion industry. More than 15 million visitors annually. Tourism is tough during a pandemic. Our homeless population increasing along with crime. Even Law Enforcement Agencies were reluctant to have conventions here due to safety issues.
The Pivot: Leisure Travel & Outdoor Events. To mitigate the fears regarding indoor events during the pandemic, Visit Sacramento shifted to large outdoor events with great success.
Music Festivals
MIKE noted a recent reference to a Facebook picture and comment regarding Golden Sky: “This is what the final performance morning looks like after 4 festivals in 6 weeks. Not to mention, ending it off with what will become the biggest Country Music Festival in America….mark my words.”
Let’s talk about conventions:
If Visit Sacramento places a group at SAFE Credit Union Convention Center, the revenue at our local hotels goes up by an average +11% above its baseline levels. That’s hotel revenue, sales tax revenues, and City and County hotel tax collections revenue
March 2023
Our largest conventions:
Our Challenges for any events!
Sports Commission and sporting events bringing visitors to Sacramento:
Thank you MIKE and Visit Sacramento for your excellent work!!
UPCOMING MEETINGS AT A GLANCE
11/8/22 – No Meeting
11/15/22 – Foundation Day
11/22/22 – No Meeting