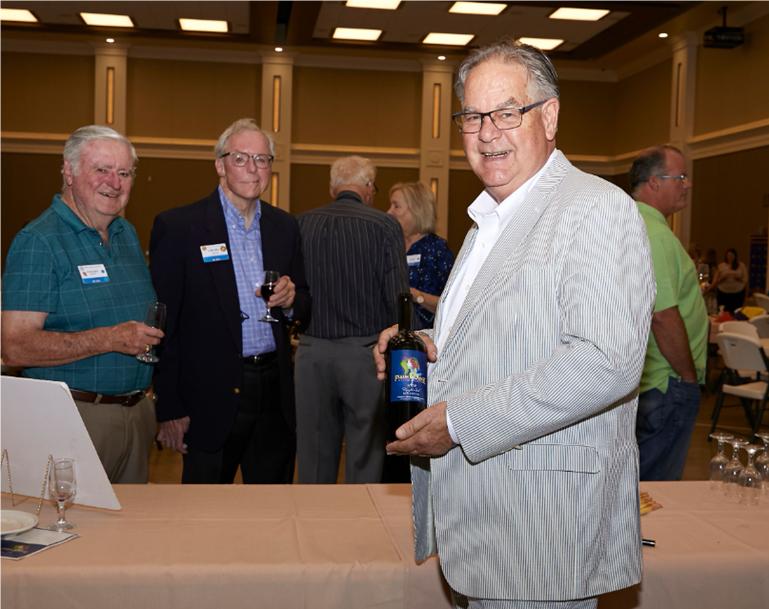 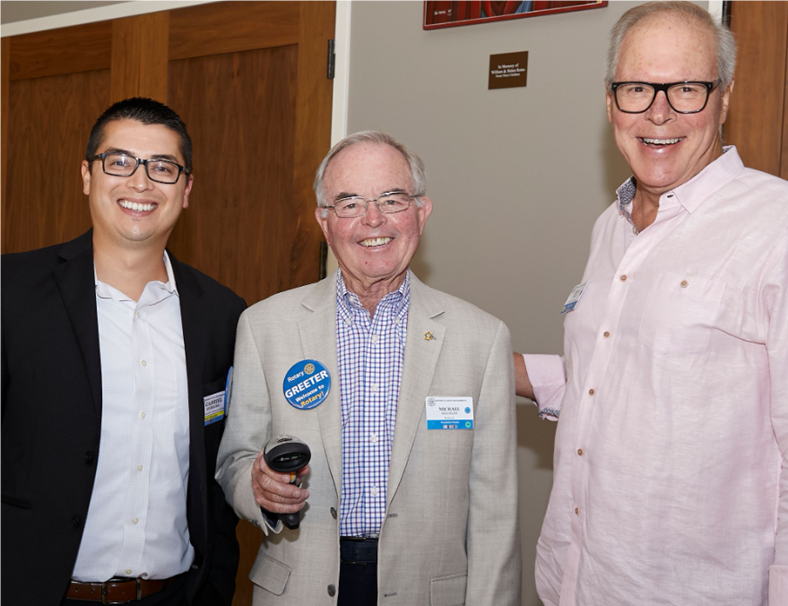 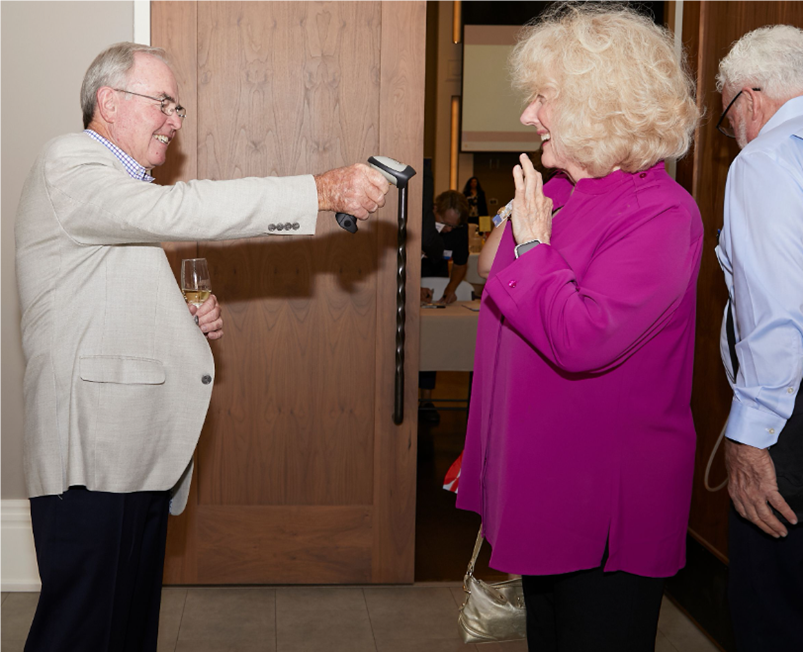 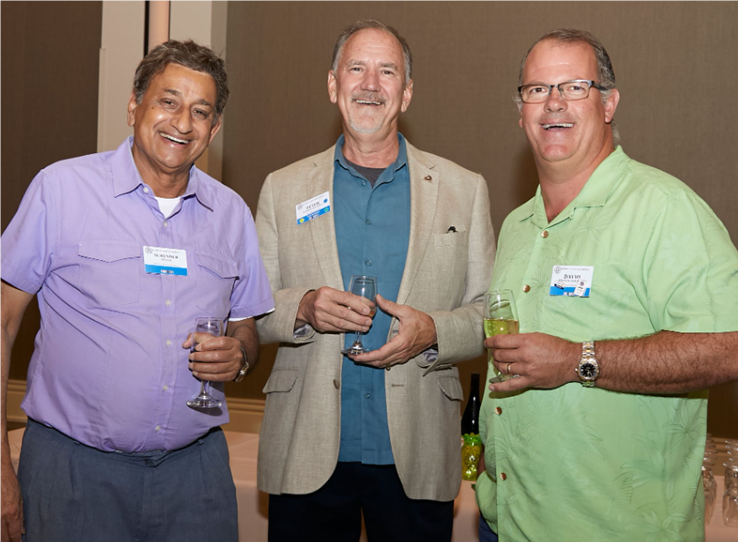 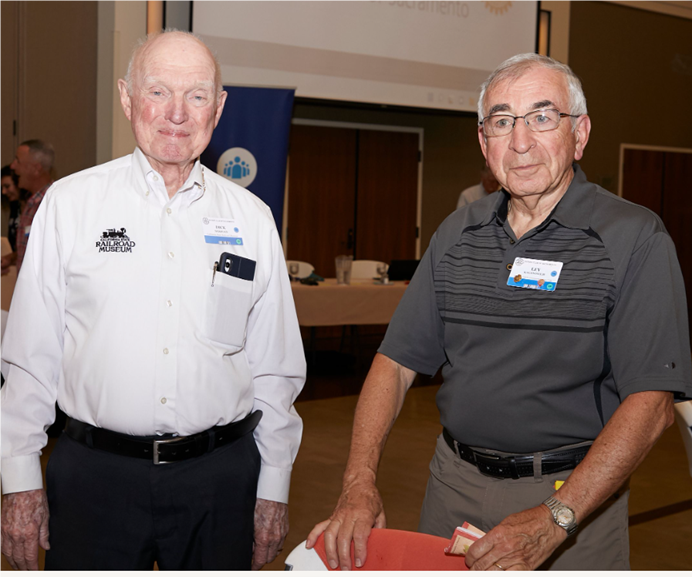 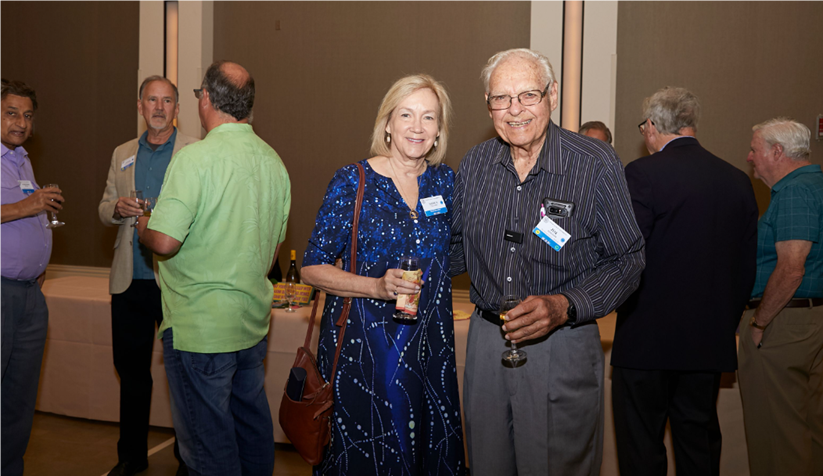 THOUGHT FOR THE DAY
DEE JOHNSON reflected on “Education” for the Thought for the Day.  Her love of lifelong learning should be an example to everyone who is curious or wants to expand their knowledge of the world. 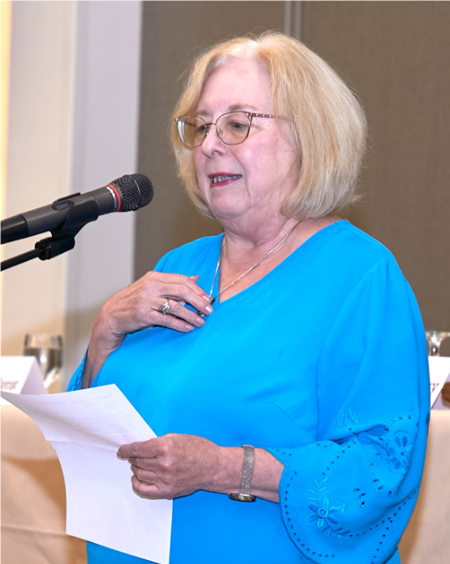 INTRODUCTION OF GUESTS
Our inbound RYE student, LUCA MERCURIO, hails from Naples, Italy.  He exchanged Rotary Club banners with PRESIDENT LINDA and spoke about his hometown.  He will be hosted during the spring semester by fellow Rotarian, DAVID BRANDENBURGER.  LUCA will begin his senior year at C.K. McClatchy High School on Thursday. 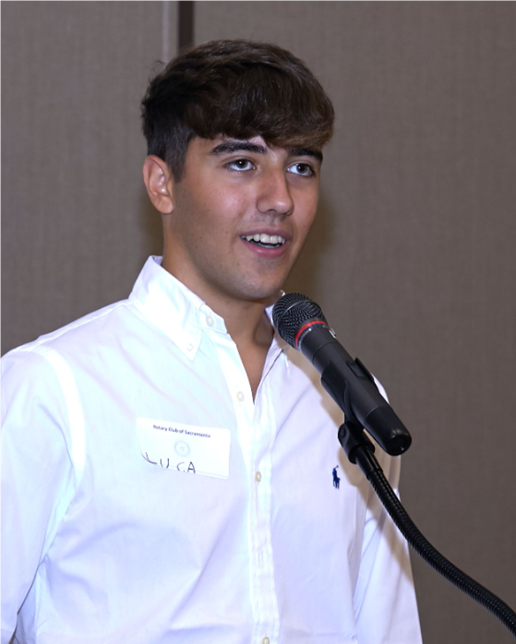 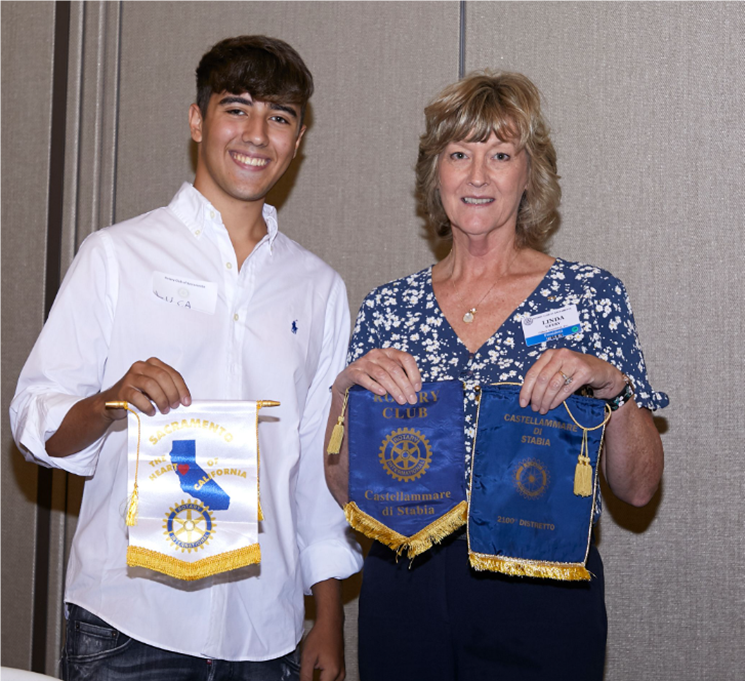 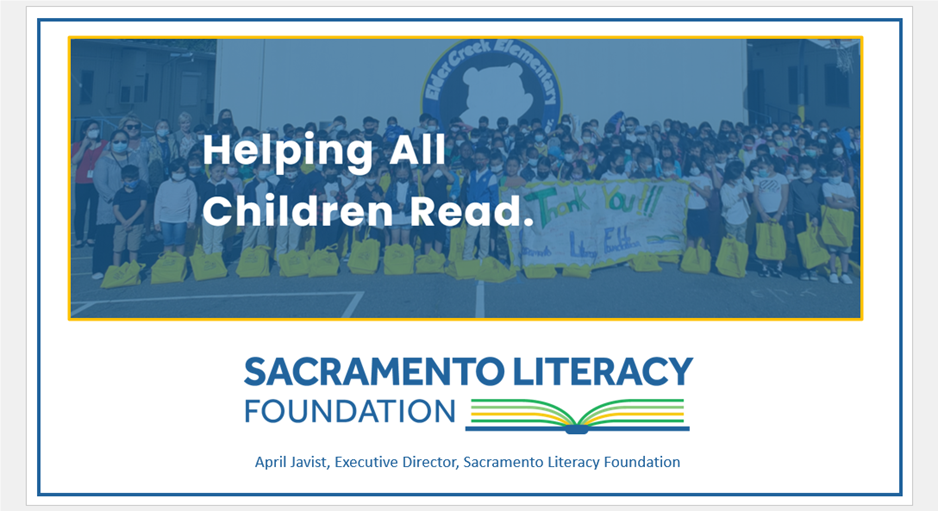 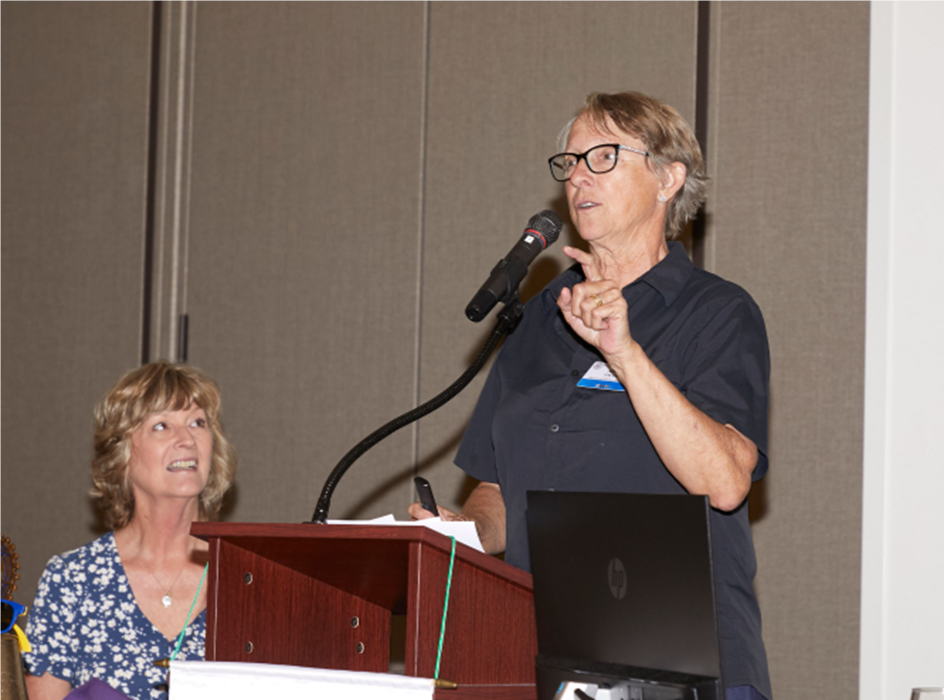 ROTARY SPOTLIGHT
SHIRLEE TULLY stood in for ELFRENA FOORD today.  She highlighted two Rotarians: GABRIEL HERRERA who is a local attorney.  He once settled a case for over $6MM!  He also had advice that you should never wear your scuba mask too tight, especially the day before you take your engagement photos with your fiance!  CRAIG BROWN was also highlighted.  He started working BOB COLE‘s company, Goodwin and Cole, as a teenager for about $1/hour.  More recently he has co-owned CB Property Inspections with his son CHRIS.  He and his family are avid snow skiers.
GABRIEL HERRERA
Birthday 9/26
2 months in Rotary 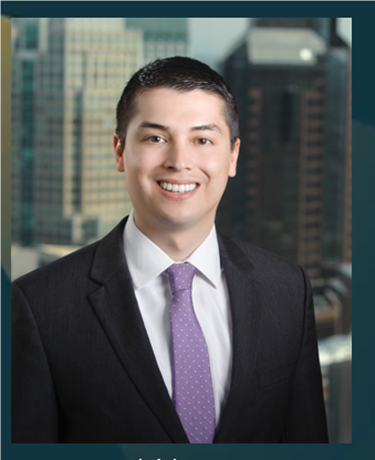 GABRIEL is an attorney with Kronick Moskovitz Tiedemann & Girard specializing in commercial litigation and Bankruptcy.  2 Career Highlights for him was being named Shareholder several years ago at the age of 32, one of the youngest in Kronick’s 60+ year history, and second, being awarded about a $7 million judgment on a case after a trial he (worked on -is there a better word?).
A highlight of GABRIEL’s legal education was taking a class in Vienna, Austria led by CHIEF JUSTICE ANTHONY KENNEDY and a Cambridge lawyer to compare Americans’ constitutional rights with those of Europeans.  He learned how different the rights of Americans are vs. Europeans, especially in regards to free speech.
GABRIEL is a member of our young professionals’ group.  He took the Leadership Sacramento program with TODD KOOLAKIAN, JUSTINO SANTANA, and BOBBY REED who told him about our Rotary Club and inspired him to join.  He also shared cases with WALTER DAHL, another influence on his joining.
Fun Fact:  GABRIEL learned a  life lesson – which never wears your scuba goggles too tight. Why? because you’ll end up with a mask squeeze which is essentially a hickey around your eyes. In his case, it was the day before his engagement photos were taken and there are NO engagement pictures that are close up.
CRAIG BROWN
8/29 birthday
13 years in Rotary 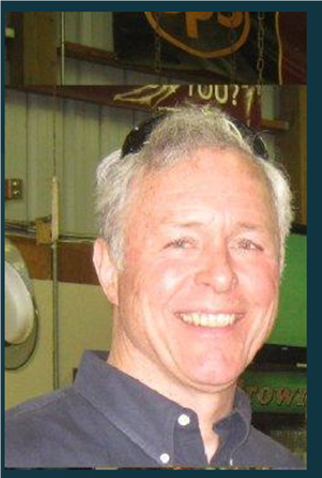 When CRAIG was 15 ½  years old, he began working at the Goodwin Cole Canvass Shop for $1 an hour. Yes that is our own BOB COLE’s business. Then he advanced to Managing partner of Goodwin-Cole Sport Shops for 20 years when it closed.
Since he had rental properties he owned, next he decided to sell Real Estate for the next 10 years.
But,  CRAIG was so good at finding things that needed fixing in his own home, he began doing home inspections at “Inspectech”.  But his entrepreneurial spirit took over and he founded his own property inspection business, “CB Property Inspections” with son CHRIS BROWN 13 years ago. Now son CHRIS has taken over and runs the business.
Skiing has been a big hobby with CRAIG. BOB COLE’s niece suggested to CRAIG, that he date JACQUE because ….she can ski.  That blind date worked and they are now celebrating  47 years of marriage.
CRAIG has had 4 melanomas and one surgery resulted in a nerve removal that resulted in his facial situation.  But he continues to live fully and just stopped skiing this year.
Fun Fact:  All 3 of CRAIG’s kids ski.  When his 2 granddaughters were 4 and 5, he started showing them how to ski in the backyard.  Now they are 13 and 11 and ski the most difficult black diamond runs.
CLUB ANNOUNCEMENTS 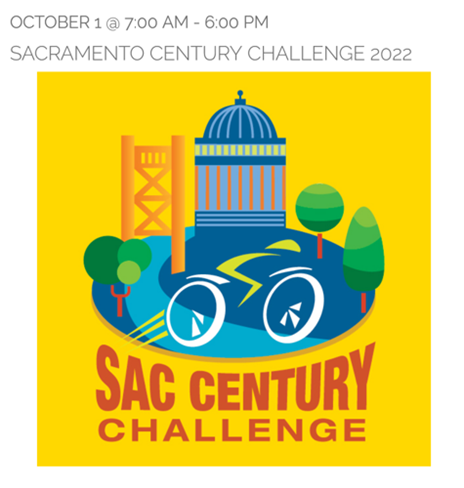 YOU’RE A GEM
APRIL JAVIST donated for being recognized in the Sacramento bee for her literacy efforts.  Click here to see the article on APRIL’s donation.
KEEFIE BREWER gave a heartfelt update on her husband, ART‘s health.  She thanked all wishers and card senders for ART‘s speedy recovery.  He appreciated them greatly and read everyone!  During a family reunion near their family cabin, ART lead a hike to spread his recently deceased son’s ashes at a favorite nearby lake.  A twist of fate and the leg during the hike out left ART with a broken femur.  His grandsons took turns carrying him.  He even had a time in baby stroller as he was rushed to an access point where Cal Fire could retrieve him.  After ushering him to Marshall Hospital in Placerville, CA he is recovering nicely in Sacramento.  His physical therapy is progressing.  KEEFIE shared that his favorite card was from our own BOB COLE (age 100), wishing Art (age 95) a speedy recovery so they could go hiking together in the Desolation Wilderness!
KATHE NATHAN donated in honor of her father who was a Community College Professor.
KERRY WOOD donated in honor of our Community College system. 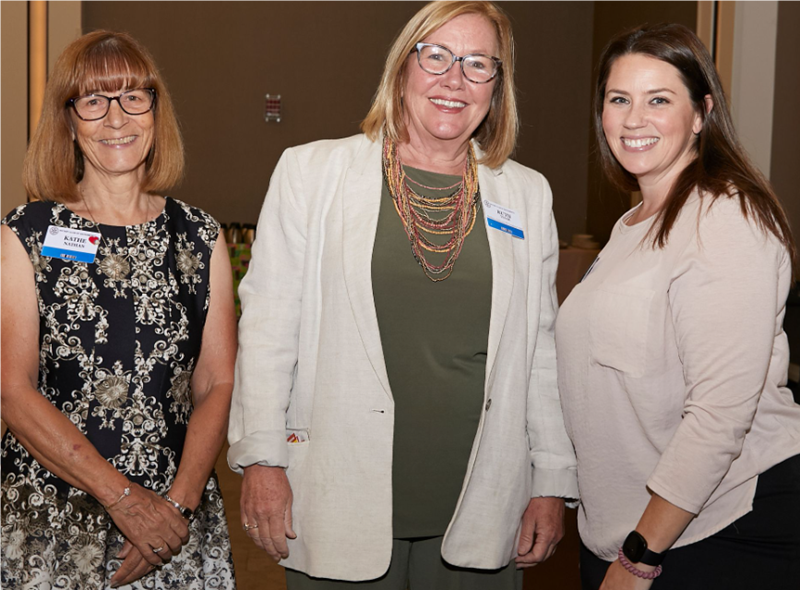 SPEAKER INTRODUCTION
PAST PRESIDENT DIANNE WOODRUFF (Retired Chancellor California Community Colleges) introduced DR. BRIAN KING, Chancellor Los Rios Community College.  Los Rios remains a notch above as a district in our great state.  There are 116 Community Colleges in California.  On average Los Rios has over 70,000 students enrolled each semester.  DR. KING received a Bachelor of Arts from the University of Missouri, a Law Degree from Duke University, and his Ph.D. from the University of Arkansas.  He was CEO of Cabrillo College in Santa Cruz when he met PAST PRESIDENT WOODRUFF.
SPEAKER
https://losrios.edu/ 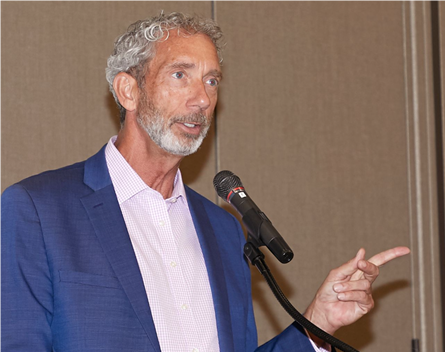 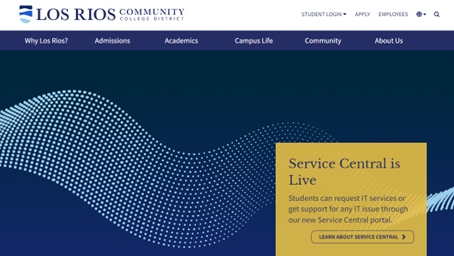 DR. KING started with a two-part question:
Is a college education questionable due to high tuition costs and limited job opportunities?
or
Is a college education is still the best path to a better life and more learning power?
He left the question in the abstract and led an exercise that had Rotarians standing to signify their own education level.  He asked attendees and graduates to stand that had attended American River College.  He then went down a subsequent list including Consumnes, Sacramento City College, Folsom Lake College, Yuba College, Mt. Diablo, Sierra College, and then onto Cal, UCLA, the balance of the UC’s, and the balance of the 23 CSU’s.
In his experience when speaking to a large group, usually 1/2 of the room is touched by a community college in some way.  He shared some interesting facts: only one in 4 people have a bachelor’s degree across the country.  UCLA turns away more applicants than any other school.  Ivy League schools accept a higher percentage of applicants who have parents that are high-wage earners rather than low-wage earners.
So what is the future of the college degree?  Why would anyone give money to Stanford?  That is like bringing sand to the beach.  Some of these schools have endowments that can fund tuition for generations and never would have to charge a cent.  A donation to a community college has a much greater impact.  It can help an emergency fund that students desperately need when a car breaks down, or a rent payment is behind.
What is the master plan for higher education?  Debt Forgiveness?  The cost of higher education is too high and the rate of this expense is growing faster than most applicants’ ability to pay for it.  DAVID BROOKS of The Atlantic was quoted: “Academic tasks are great, but organizing society around it is absurd.”
Community colleges lost 20% of enrollment during the pandemic.  This has created an interesting juxtaposition.  Funding is at an all-time high. Enrollment is down.  This has presented a big challenge.  Remote service and Online learning will now be a part of the fabric of higher education.  But we need to do this type of education “well.”  DR. KING also underestimated new students’ desire to enroll, and apply for financial aid on their phones.
We are DARK next week in observance of Labor Day.
The largest groan of the lunch was saved for PAST PRESIDENT WALTER DAHL (clad in an appropriate cowboy hat), who gave us a smile for the day:
A Consumnes River College theology professor once asked a few questions:
What is the opposite of joy? Sadness
What is the opposite of depression? Elation
What is the opposite of whoa?  Obviously, it is: Giddy Up 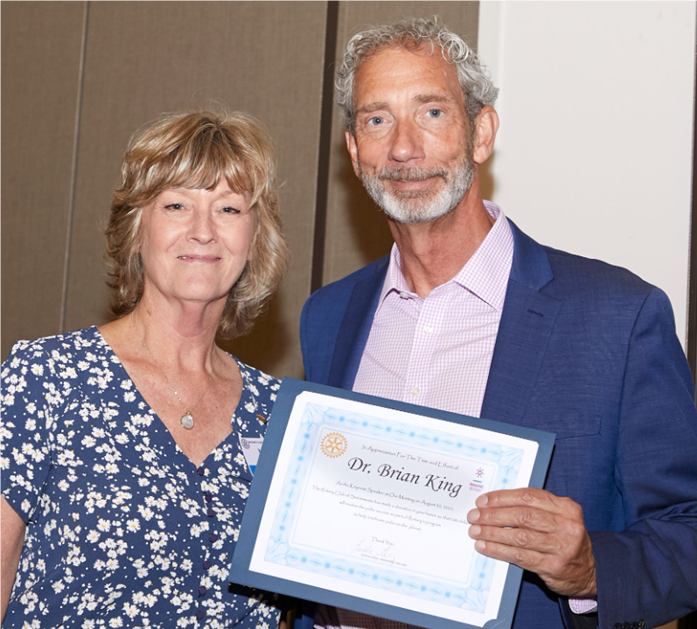 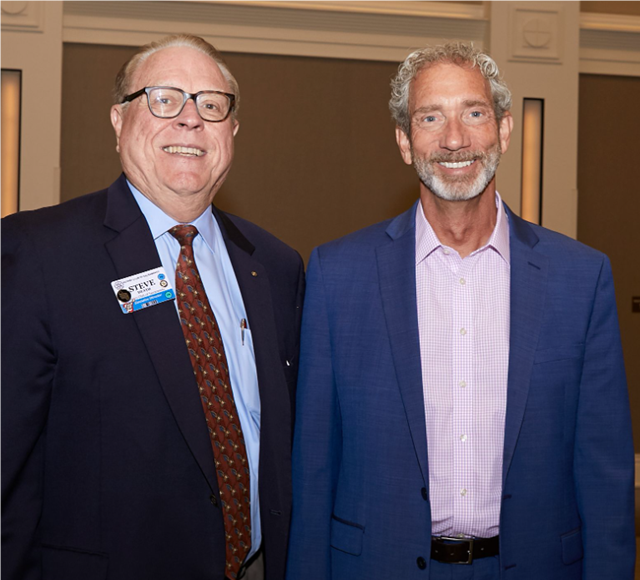 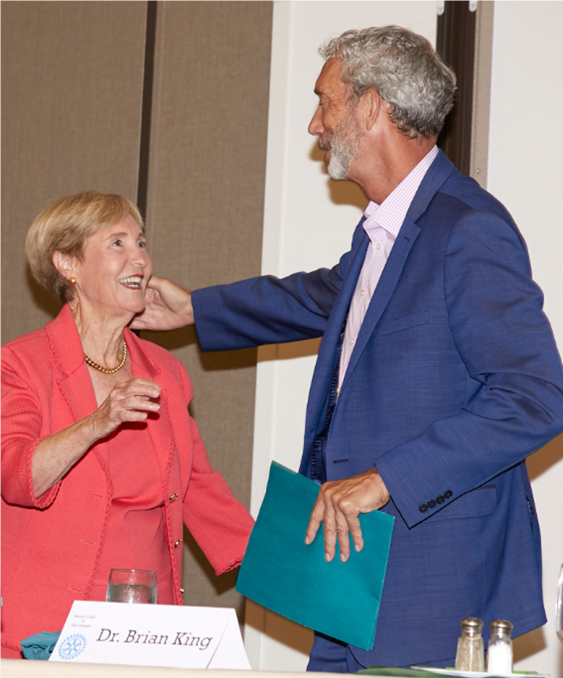 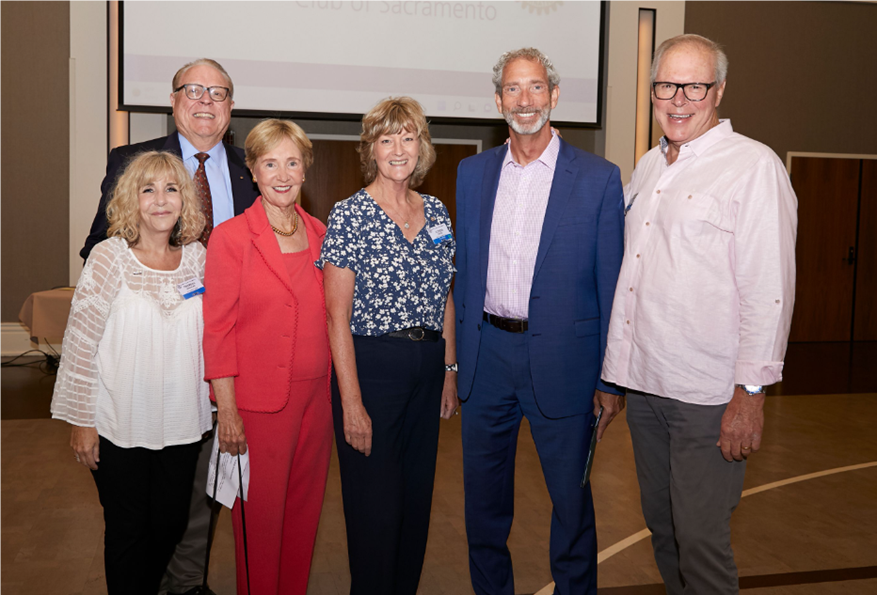 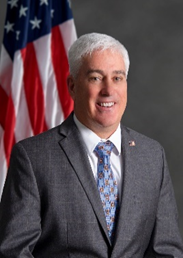 NEXT SPEAKER NOT NEXT WEEK!
Rotary Club of Sacramento is “dark” next Tuesday (6th) for the Labor Day holiday. We will be back in session at the Annunciation Church auditorium at noon on Tuesday the 13th. Be sure to watch your email for the reservation link, because you won’t want to miss the opportunity to hear from Dennis Guertin, Assistant Special Agent in Charge of the National Security and Administrative Branch of the FBI’s Sacramento Division. ASAC Guertin was also the Supervisory Special Agent of the Joint Terrorism Task Force in Sacramento. That being the case, perhaps Guertin can help unravel one of the biggest mysteries of all: Why is the FBI Sacramento office in Roseville?
UPCOMING MEETINGS AT A GLANCE
09/06/2022 – Dark
09/13/2022 –DENNIS GUERTIN, Assistant Special Agent – Administrative Branch of FBI Sacramento Division Click here for Dennis D. Guertin LinkedIn Profile 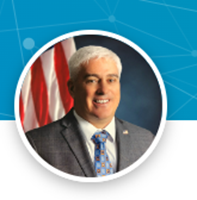 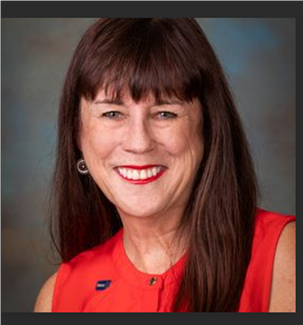 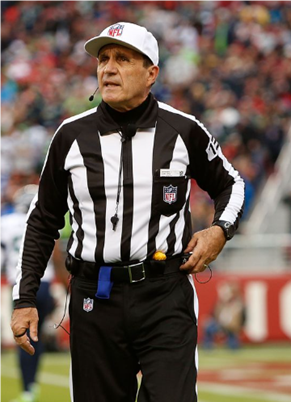