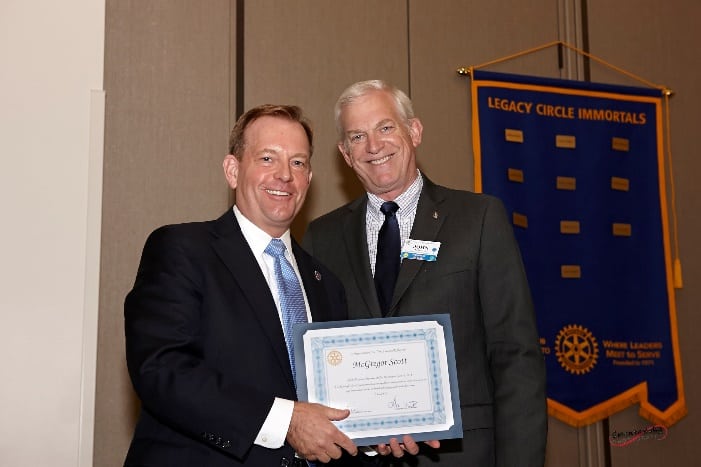 U.S. Attorney McGregor Scott started his speech with a joke. A guy walked into a bar and someone told him that Lions had sex like ten times a night. “Damn, I just joined Rotary,” the guy answered.

Then, the top federal prosecutor turned to the serious challenges facing the Eastern District which encompasses 34 counties, 87,000 square miles of land – much of it Forest Service or park lands – and 8 million people from Sacramento to Bakersfield.

First, Scott said his office is working with local law enforcement officials to target the baddest criminals and bring them up on federal charges rather than local charges. It’s a program called Project Safe Neighborhoods.

“We have all the tools in the tool box,” to get the worst offenders in federal prisons where they will get longer sentences for their crimes, serve a higher percentage of their sentences and can be transferred to prisons in other states, severing gang ties.

His staff is working with the Sacramento city and county law enforcement and the District Attorney’s office to say, “Pick your most dangerous offenders and we’ll bring the weight of federal prosecution to take them off your streets as a way to reduce violent crime.”

Second, his prosecutors are zeroing in on the large-scale Mexican cartel marijuana growers who plant their crops on public lands, poisoning the environment, endangering wildlife and diverting precious water to their illegal crops.

U.S. Attorney General Jeff Sessions has given Scott’s office $2.5 million in new funds to work with federal agencies and law enforcement since the cartels have started smuggling a dangerous pesticide banned in California to use on our public lands.

Scott said his office is working with Dr. Mourad Gabriel, a wildlife researcher at UC Davis, to document the environmental damage done by growers including the poisoning of spotted owls and bears, dangerous garbage and debris and the theft of water. One marijuana plant uses 12 gallons of water a day.

Third, the U.S. Attorney has filed a lawsuit to throw out California’s sanctuary city laws because only Congress has the authority to act on immigration laws. “We’re going to win on this lawsuit,” he said.

During announcements, John Swentowsky (Photography, family portraits) proudly announced that our softball team is in first place and undefeated. The next game is Monday, 6:30 p.m., at Howe Ave. Park. Kathe Nathan (Merchants National Bank) urged members to continue supporting the Sacramento Century Race, which now has $12,250 in sponsorships. President John asked for volunteers for the race and to help with Son’s Day on June 26.

Elfrena Foord (Foord, Van Bruggen, & Pajak) announced the installation of President Elect Diane Woodruff on July 10 when members will learn both the good and dark sides of Diane. “You may love her, you may endure her,” she said with a snicker.

Past President Brian Van Camp (ADR Services, Inc.) presented those who served during his term from 1993-1994 with a surplus mug in storage for 25 years, which read: “If it ain’t broke, set it on fire.” He donated $10 for every year since his presidency and pledged $100 in memory of Denny Evans.

Past President John Frisch (Newmark Cornish & Carey) said when he heard of Evans’ death, he called the office to find out how much it would cost to complete the next Paul Harris and Eddie Mulligan to be earned by Evans. Frisch gave $45 to complete the Harris and $200 of $800 owed on his Mulligan. Frisch said Evans was a good man and a great Rotarian. 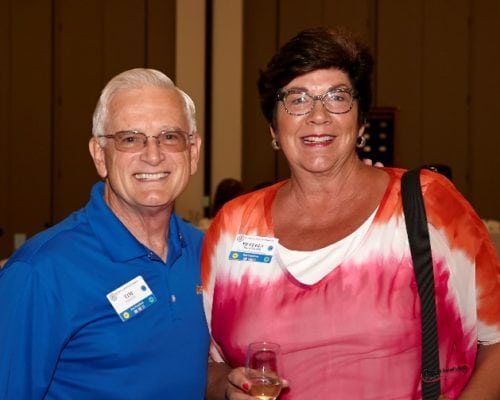 Other members stood up to complete the Eddie Mulligan for Evans. Giving $100 each were Jim Relles (Relles Florist) who noted his own 49th wedding anniversary, Dick Osen who said he sang at Evans’ wedding and Past President Tim Pinkney who said, “We will miss him a lot.” Eric Solis (Solis Financial Strategies Group of Wells Fargo Advisors) and Mike Bullington (Northwestern Mutual Financial Network) each gave $100. President-elect Nominee Jim Leet (Boutin Jones Inc.) gave $100 for Evans and $100 for Solis. Norm Marshall (Headwaters Construction Inc.) gave $100 for Evans and another $100 in honor of whoever drafted our winning softball team. Past President Beverly Brautigam (Brautigam Financial Services) also gave $100.

As always, thanks to John Swentowsky (Swentowsky Photography) for photos of the meeting.