Rotary Meeting: February 8, 2022
WELCOME/GAVEL IN
President Elect LINDA GEERY (Gilbert CPAs) gaveled in the meeting at 12:10pm, welcoming all in her quietly authoritative voice. She noted that Bob was again neglecting his presidential duties… 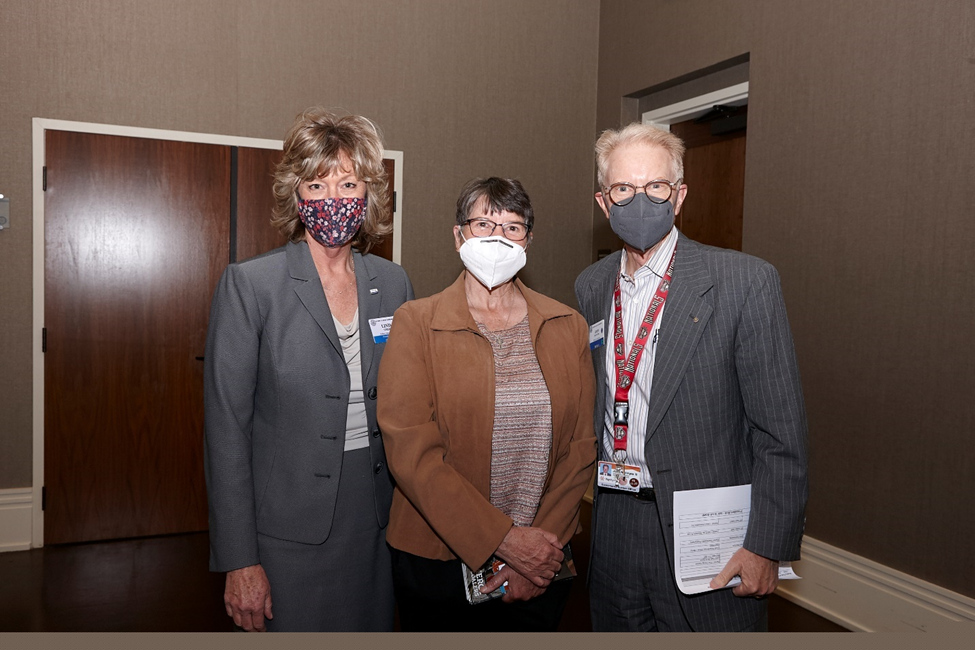 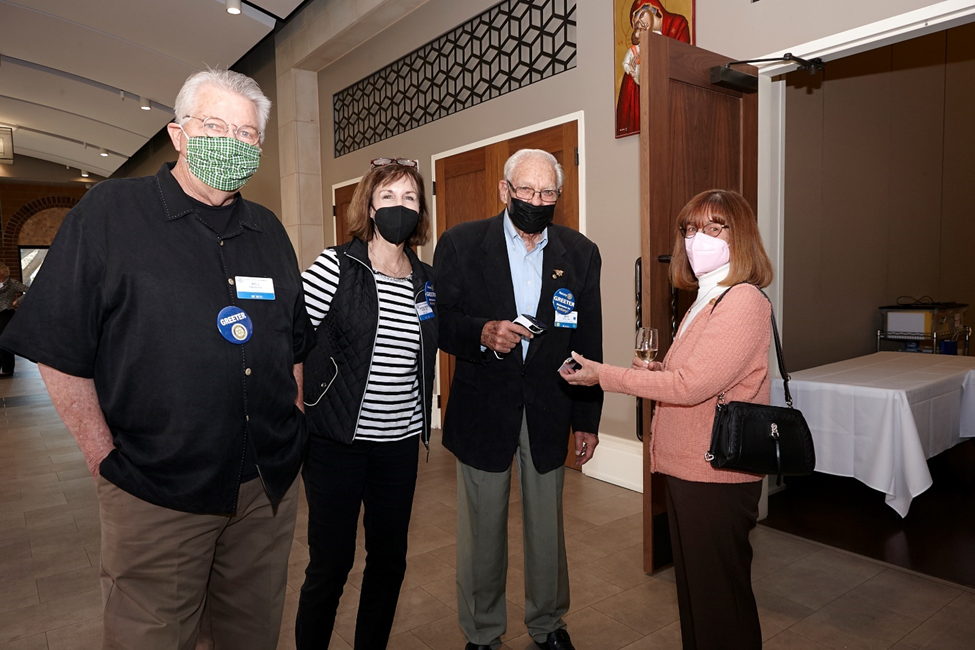 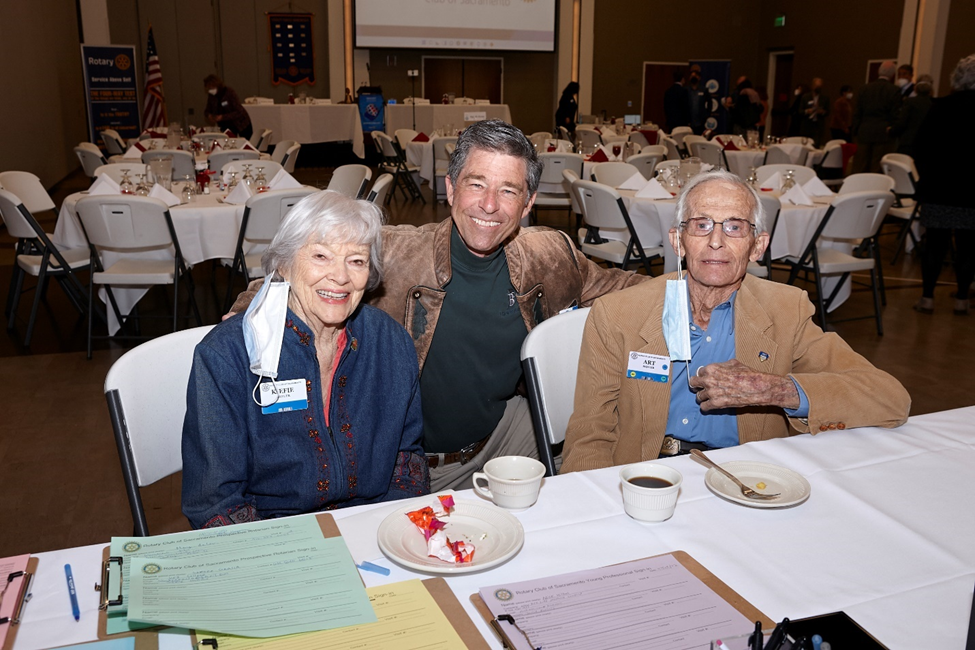 THOUGHT FOR THE DAY
Past-President THOM GILBERT offered thoughts in light of our guest speaker, relating to achievement, sharing (a recorder’s approximation of) quotes by Mark Spitz, “Failing to prepare is preparing to fail,” by Ralph Waldo Emerson, “Those who are good at making excuses are not good at anything else,” and a final one without attribution, “Don’t give up at half-time, you need to go out and win the second half!” 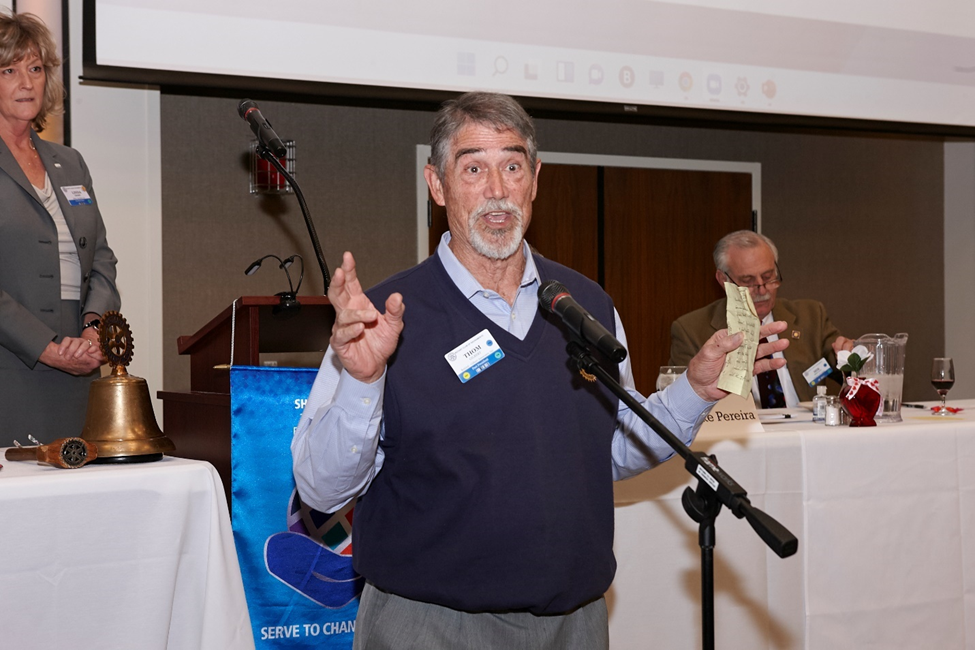 PLEDGE OF ALLEGIANCE
President Elect LINDA led the club in saluting the flag and our country. 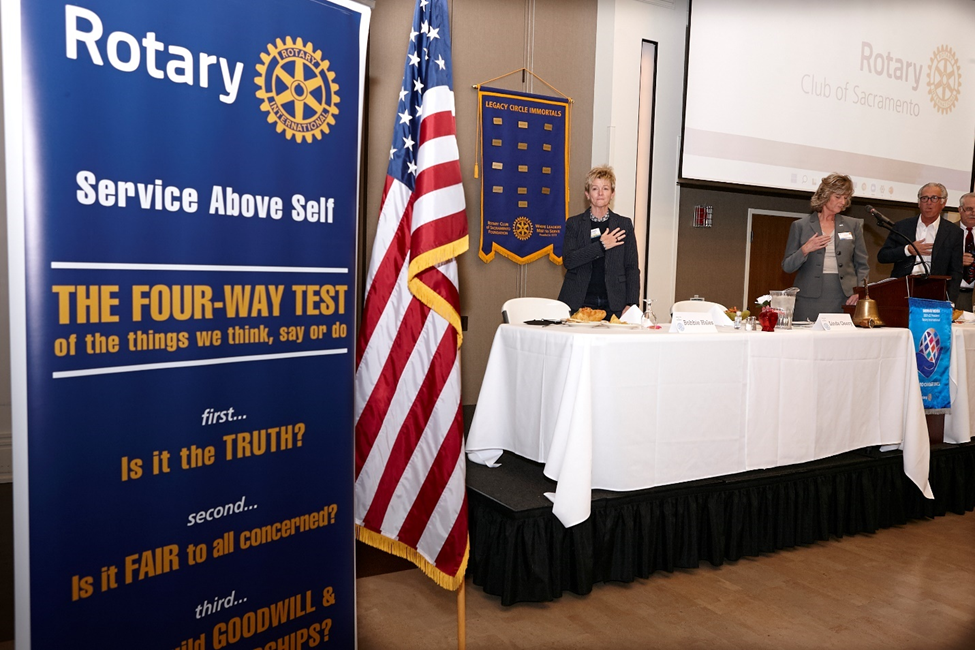 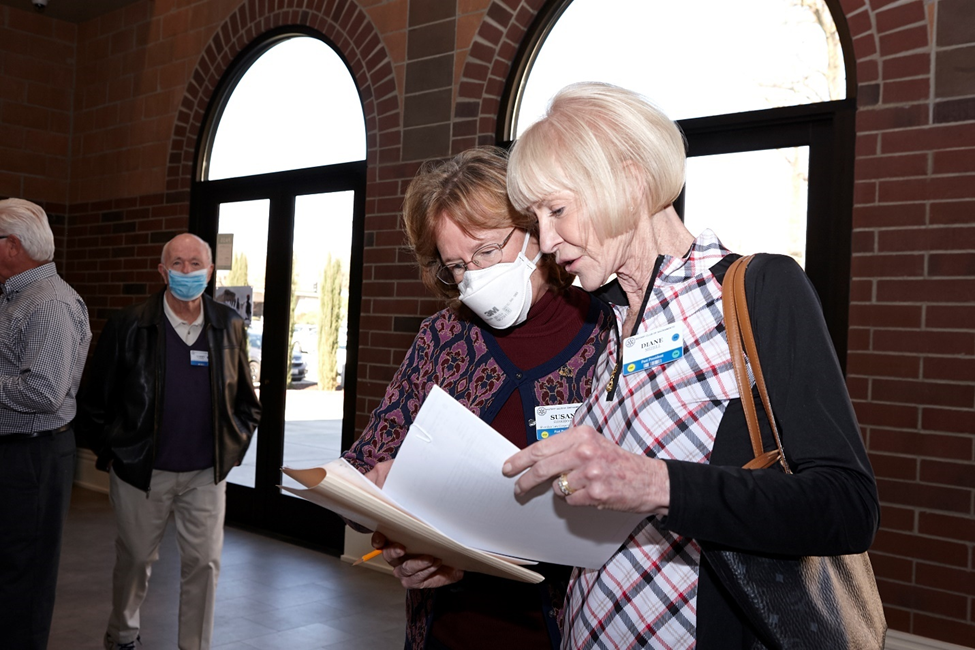 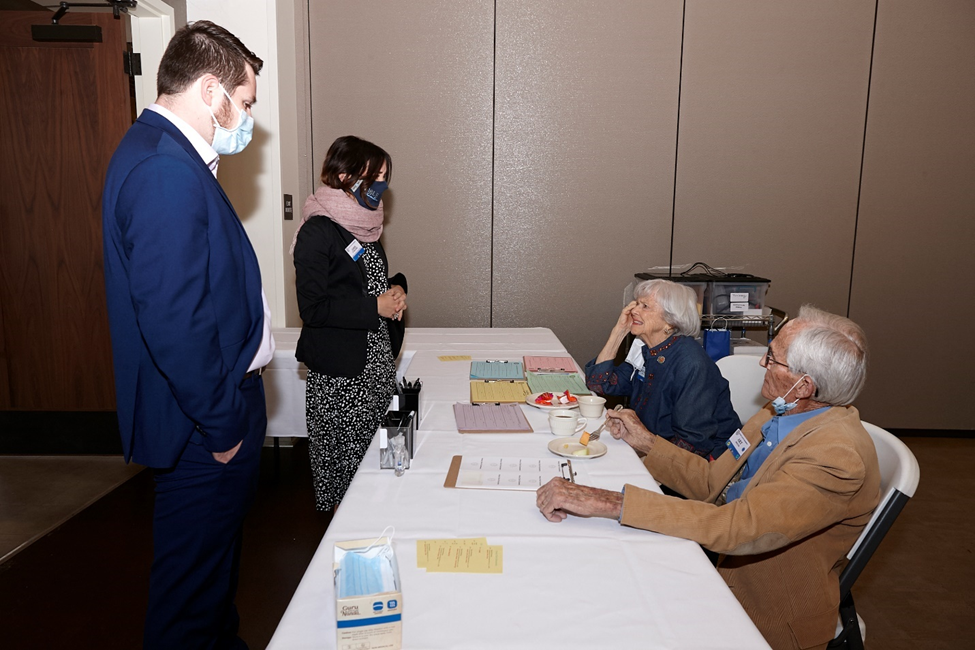 HEAD TABLE
President Elect LINDA announced those who graced the dais today:
MEETING SPONSOR
President Elect LINDA donated her time to Sister LIBBY FERNANDEZ of Mercy Pedalers (https://mercypedalers.com/). Sister LIBBY opened by showing a news video of her ministry to the homeless/unhoused, reaching out into the camps and on the streets to offer kindness, human essentials (toiletries, food, water, etc.), but also to assist those in need to improve their situations – shelters, housing, vaccinations and other needs of the unhoused.
CLICK HERE to watch a video of Sister LIBBY.
SPOTLIGHT COMMITTEE
JAMIE FURLONG shared the recent triumphs of the Young Professionals group, which has been a highly successful addition to the club, helping to attract younger members to Rotary. She encouraged every member of the club to bring a young professional (and prospective Rotarian) to the March 22nd “Young Professionals Takeover” meeting. Comply – JAMIE’s word is given!
CLUB ANNOUNCEMENTS 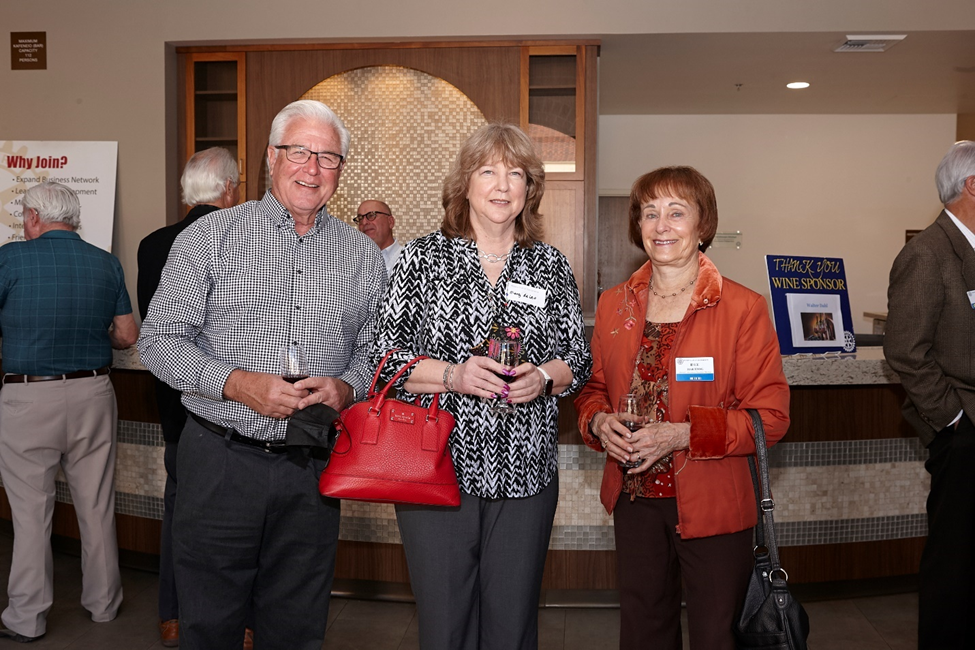 LET’S GO FOR A RUN 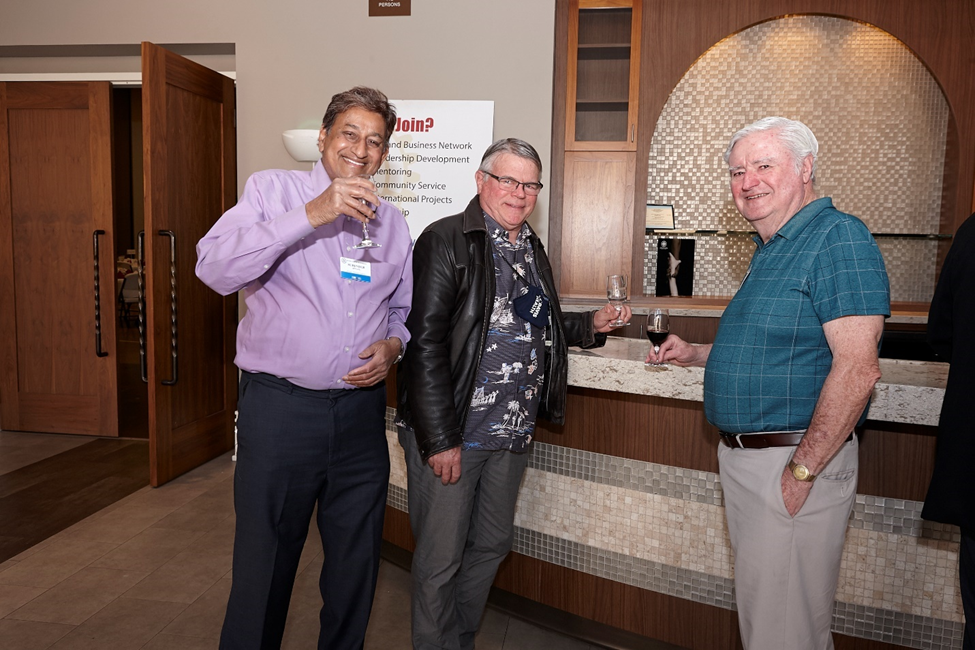 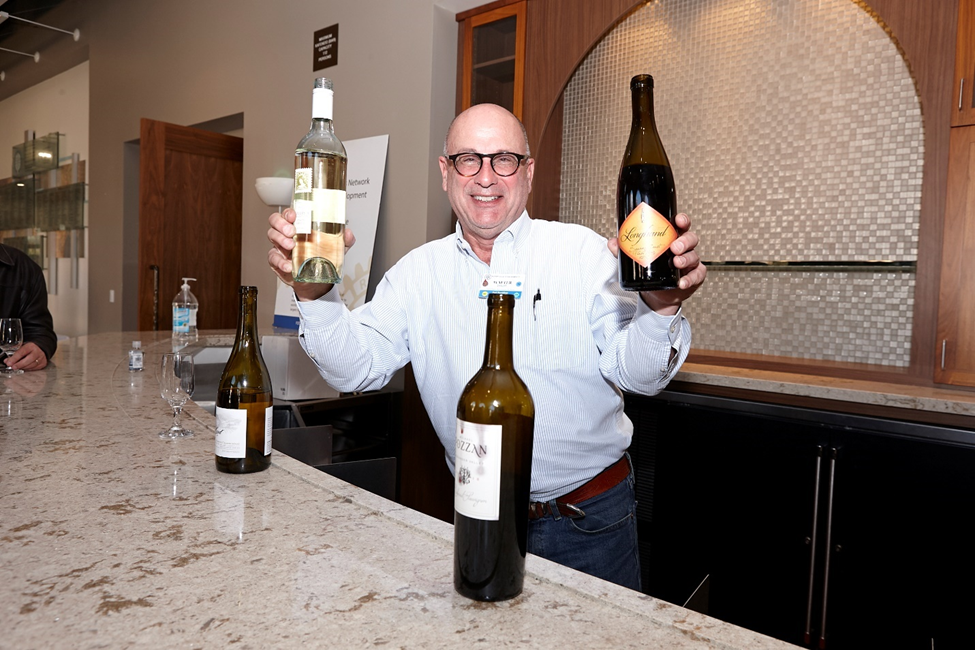 CHAIR OF THE DAY
MIK MIKLAUS started his introduction by noting the common misperception that sporting contests have two teams, but he noted there’s a third team – the referees who are disinterested parties, serving to ensure that fair play prevails. He and MIKE PEREIRA started together and rose in the ranks of referees, yet MIKE continued to rise to the very top, becoming “Mikey Rulebook.” MIK then welcomed to the dais, native Stocktonian and Fox football analyst MIKE.
SPEAKER
MIKE opened by sharing that he started as a referee in 1970 doing Pop Warner football games in East Palo Alto primarily as a way to get weekend beer money, yet this led him to a career that has now spanned nearly 52 years. He wondered aloud about what else he could do and suggested he might become a screenwriter and write the next season of “Ozark.” He then went into the ‘inside baseball’ for us non-viewers, saying he would send Ruthie on a blind date…with Jimmy Garoppolo, and then engineer selling the San Francisco Forty-Niners to the Mexican Mafia. Be sure to tune in to season 5…
MIKE noted that he never prepares for presentations like this, because he likes to keep things fresh, so he doesn’t have to remember what he said before, and to keep things timely. He showed infinite wisdom in sharing that he hates the Dallas Cowboys (a hatred shared by all right-thinking individuals), and that HE is the reason the Cowboys lost to the 49ers in the playoffs: Some time ago, he moved the line judge’s position from behind the defensive line to behind the offensive line (and behind the backfield), which meant that it took an extra half second at the end of the game for the line judge to get the ball placed, which was exactly the extra half second the Cowboys would have needed to stop the clock and set up for a game-tying field-goal attempt. Thus, 49ers win, and Cowboys whine (am I being too subtle?)!
Drawing attention to his new title, ‘Head of Officiating for the USFL,’ he said it wasn’t a typo and that, in fact, the USFL was coming back starting this spring (April through July). Why did he sign on and why does he believe the USFL can survive this time? Because the whole enterprise is owned by Fox! 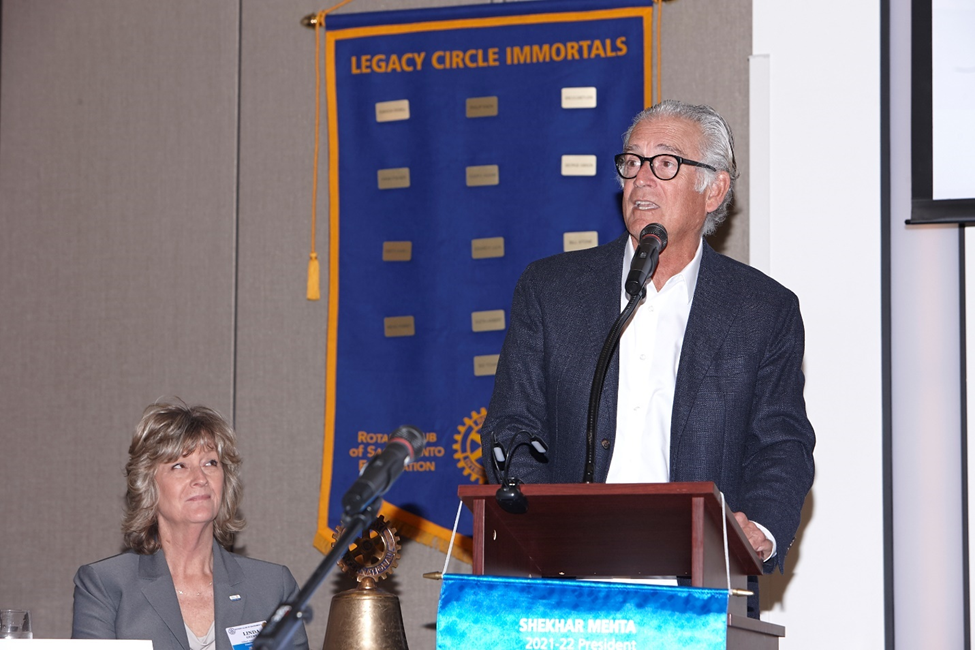 MIKE then shifted gears, reflecting on the presentation Sister LIBBY did earlier, and resonating with her suggestion that “Every little piece, becomes part of the larger solution.” He said that his career has been in refereeing, yet his passion is for his nonprofit, “Battlefields 2 Ballfields,” which provides scholarships to help train and equip former military to become referees. There is a desperate shortage of referees, umpires, etc., and many veterans participated in sports, have remained fit, and appreciate following the rules – and some have struggled to reintegrate to society after their service.
MIKE has seen many participants in his program flourish as a result, which provides a meaningful societal service after service to the country. He noted with pride that he had recently confirmed a scholarship for a veteran who was emerging out of the military court system and who has gotten his life back on track and will now be refereeing softball in Rochester, NY.
CLICK HERE to learn more about Battlefields 2 Ballfields.
MIKE concluded by opining that the sense of “service” is something he sees declining in the country (but not in Rotary…) and considers that a great loss, with unfortunate results like the soccer ref in Roseville who was assaulted on the pitch during a soccer game. He hopes we’re better than that, and that we can find our way back toward service to our communities and society. He then offered to take questions.
Past-President KEVIN SMITH-FAGAN (FairyTale Town) asked about former Miami Dolphins Coach Brian Flores’ suit against the NFL for discriminatory practices. MIKE felt this was thorny, noting that diversity in football is especially tough – 70% of players are people of color, and they are there because they’re the best, but he’s concerned that, in his view, not enough people of color are getting the opportunities in the lower-level coaching ranks to develop into the best at the highest level. This is a challenge in football and in other fields and circumstances across the country and change isn’t happening fast enough.
In response to another question, MIKE noted that football is safer than it’s ever been, thanks to rule changes, but that it is still a violent sport and that, if he had sons, he would probably discourage them from playing tackle football, especially when they’re youngsters and still growing. He finally noted that there would be some different rules in the USFL compared to the NFL, with the aim of making the game more entertaining. He noted that the “replay guy” will have “an inordinate amount of power.” Then he noted that the replay guy would be him! 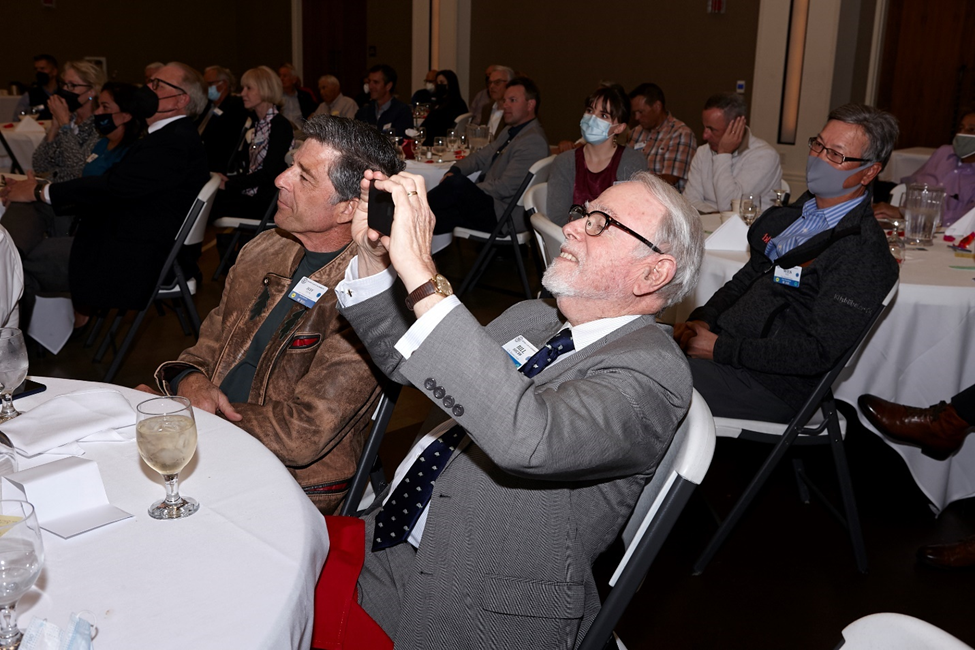 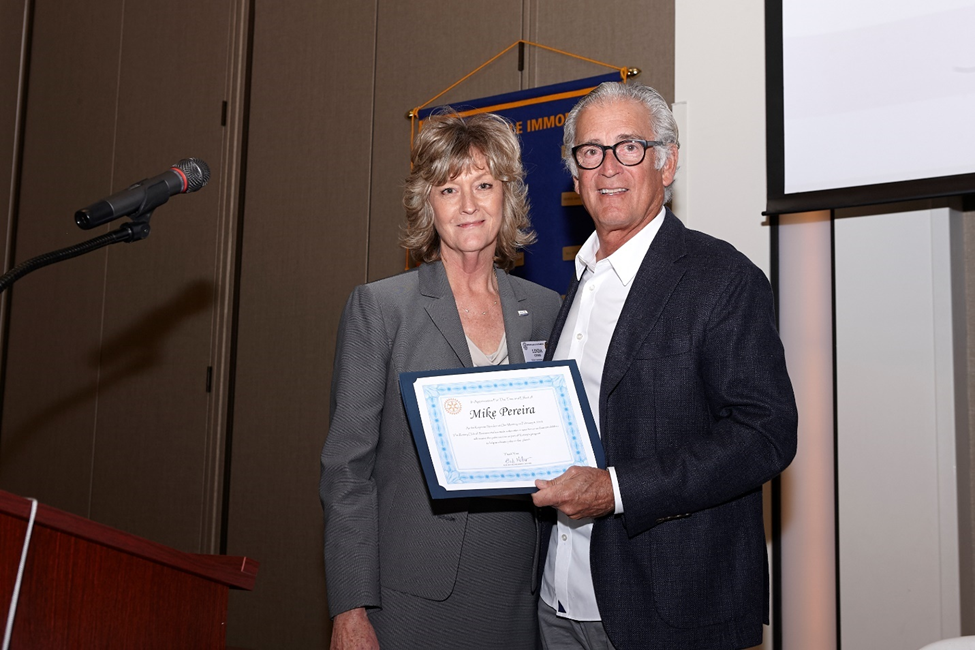 President Elect LINDA thanked MIKE and stated that, in honor of his presentation today, 100 children will receive the polio vaccine in his name.
To watch MIKE’s entire speech, CLICK HERE.
NEXT MEETING
President Elect LINDA invited Sergeant-at-Arms GIULIANO KORNBERG (Sac Opera/Philharmonic) to share next week’s plans; GIULIANO noted that next week we will be dark, but the following week will feature COLLEEN NELSON, new Executive Editor of the Sacramento Bee (and a former White House Correspondent for the Wall Street Journal). President LINDA concluded the meeting at 1:30pm. 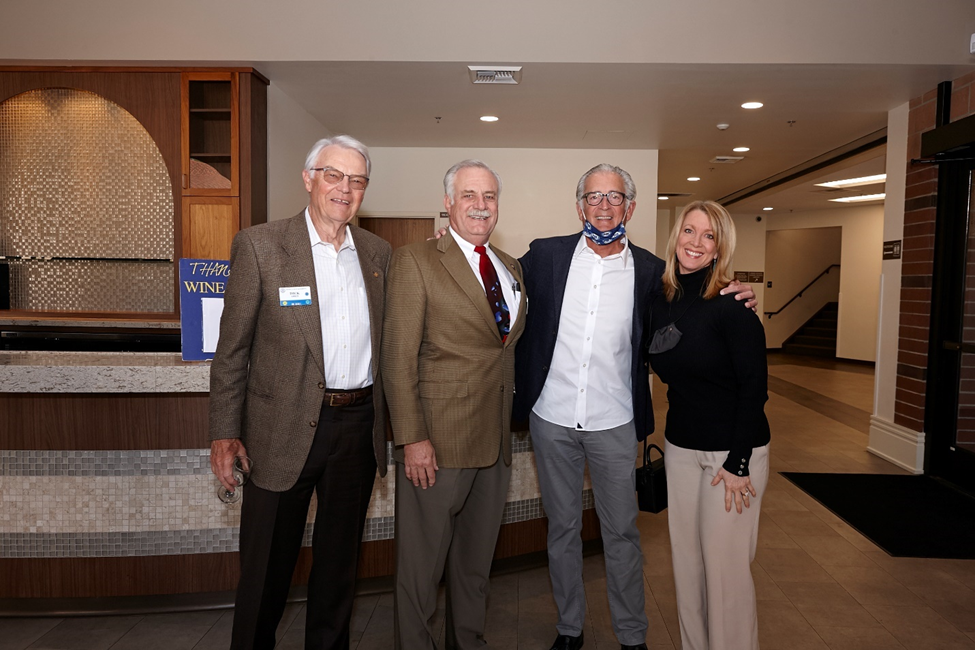