President Diane Woodruff was the club’s official Leprechaun, welcoming everyone with her jaunty hat and full beard honoring St. Patrick’s Day!  Diane proudly stated she has actually kissed the Blarney Stone and opened the weekly club luncheon with a corny Irish joke.

After President Diane thanked Elfrena Foord (Foord, Van Bruggen & Pajak) for the lovely piano melodies, proud Irishman Kelley Moran (Moran and Associates) gave the Thought for the Day asking Rotarians to close their eyes and meditate for a minute. He concluded by emphasizing the importance of taking care of our soul – a service to self.

Meeting sponsor Steve Horton, of UCP of Sacramento and Northern California, shared the history and scope of UCP, which began in 1955 providing services to families with children with cerebral palsy. Today, nearly 2,000 families with many different types of disabilities are served through a variety of programs.

The newly formed “Shamrockers,” comprised of some of our favorite Irishmen – Kevin Smith-Fagan (PBS KVIE), Kevin Williams (PBS KVIE) and John McIntyre (Mercy Foundation) — serenaded the crowd with two Irish ditties and invited all to sing and clap along. 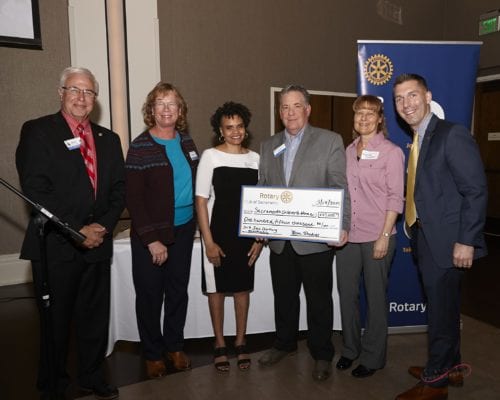 Past President Susan Sheridan invited members of the Sacramento Children’s Home board and staff, including Roy Alexander and Todd Koolakian, to come forward to receive a donation from the club’s 2018 Sacramento Century cycling fundraiser.  SCH’S Crisis Nursery was the event beneficiary.  President Diane’s goal was to raise a net of $100,000 and, after much fanfare, Past President Susan presented a check for $115,000 and thanked all who made the Century a big success.

Rayne McKenzie, an SCH board member and former client, gave a heartfelt testimonial about how the Crisis Nursery helped her and her family with a safety net of support.

The weekly announcements all emphasized the fun that Rotarians have together and the commitment to the community.

Mystery Trip – Nancy Teichert promoted the April 6th Mystery Trip, and teased the promise of wildflowers and baked treats on the outing

Ski Trip – David Brandenburger invited skiers to sign up for the March 28th ski trip and experience first-hand the record-breaking snowpack in Tahoe. Sign-ups are open till March 25th.

Golf for Kids – Bob Miller (First US Community Credit Bank) reminded Rotarians of the May 6th golf tournament and encouraged golfers to sign up.

In “Let’s Educate Someone!”, Past President Walter Dahl (Dahl Law) celebrated his daughter’s new employment after earning her Bachelor’s and Master’s at Tulane. Mike Bullington (Pacific Advisors), also a Tulane grad, donated to Walter’s fund and made a second donation to Dan Fenocchio’s (Cunningham Engineering) fund in recognition of Dan’s stellar clay shooting record (25 out of 25!)  Dan, in turn, donated to Mike’s fund in thanks for coordinating the recurring clay shoot outings.

Chris Ann Bachtel (Exchange Bank) introduced the Speaker for the Day, Bobbin Mulvaney. Chris extolled the tremendous impact Bobbin and her chef husband Patrick have made on the community and on sustainable agriculture, including their work with St. John’s Center for Change and their recent James Beard Award. 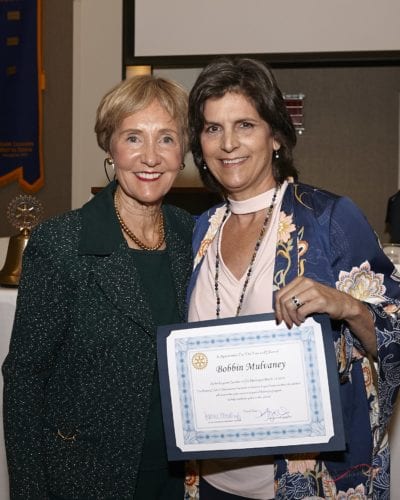 Bobbin spoke about her background growing up in the Central Valley on a farm and her 1980 start as a chef in catering. She and Patrick have always been devoted advocates of sustainable agriculture and the farm-to-fork movement, long before it was named as such. Bobbin’s experiences including running her own Sacramento catering business and then handling catering services at the Convention Center and the Hyatt. Bobbin met Patrick after she left the Convention Center and Mulvaney’s Building and Loan was born. Bobbin energetically demonstrated the many people “behind your plate of chicken” who make your meal possible, to emphasize the importance of supporting the facets of the industry. She concluded with her newest endeavor of championing women working in all aspects of restaurants and catering.

Elfrena Foord concluded the meeting with the Smile for the Day and a reminder that next week’s meeting will feature Matina Kolokotronis, COO of the Sacramento Kings and the highest-ranking woman in NBA.

This week’s greeters were Chris Boessenecker and Gerry Dabi, both of Golden Pacific Bank, along with Art Breuer. John Swentowsky (Swentowsky Photography) handled the photography duties. The wine reception was hosted by Jay Lowden (YMCA of Superior California), and the Pulse reporter was Allison Cagley (Friends of Sacramento Arts).