So proclaimed school President Dr. Robert Nelsen, who ticked off an impressive list of Hornet accomplishments in his speech at the club’s August 14 meeting. 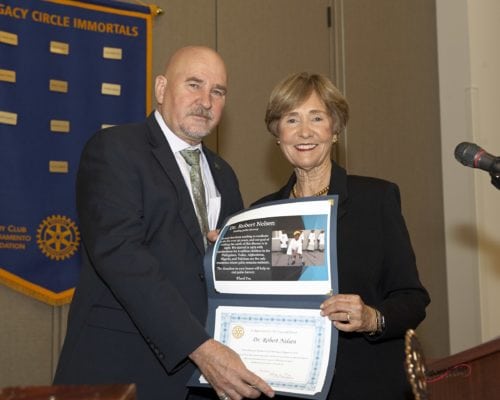 Meeting Sponsor Linda Geery (Gilbert & Associates) donated her time to Alliance for Education Solutions, represented by Charles Carter. AES advocates for vulnerable California students and opens pathways to success for young people. Among its initiatives is the Davitto Leadership Academy, and AES is seeking mentors to help boost the lives of youth served by AES. 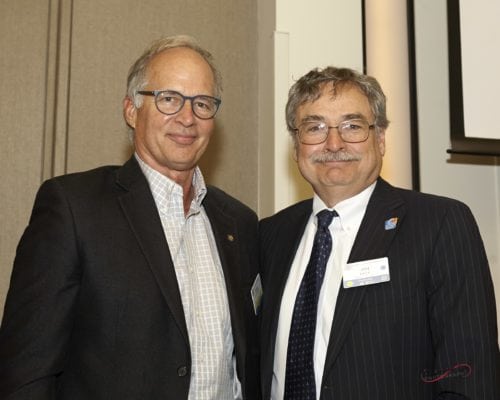 Brandon Montalvo (Morgan Stanley) was introduced by Patrick Furlong (Legacy 1031 Exchange Solutions); he’s sponsored by Patrick and by Jamie Furlong (Legacy Investment Real Estate). A Texan, Brandon got undergraduate and MBA degrees from Central Arkansas, where he also played baseball. He is active in the youth mentoring program The Playmakers. 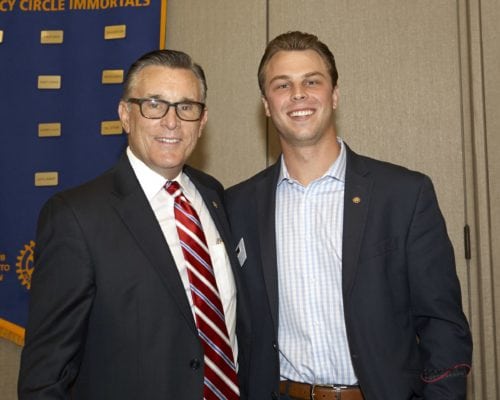 President Diane Woodruff explained she is working with the boards of the club and the club foundation to earmark funds for wildfire relief efforts, so the organization will robustly support fire relief while not soliciting individual donations.

Callee Setzer (Setzer Forest Products) and Käthe Nathan (Merchants National Bank), new chairs for the club blood drive, appeared in vampire outfits to be inducted into Past President Skip Lawrence’s exclusive Society of the Order of Draculas, a shadowy group devoted to the blood drive. Callee announced the club goal of 275 donations this year and encouraged Rotarians to begin giving soon, to build momentum for our big push the week of January 14. 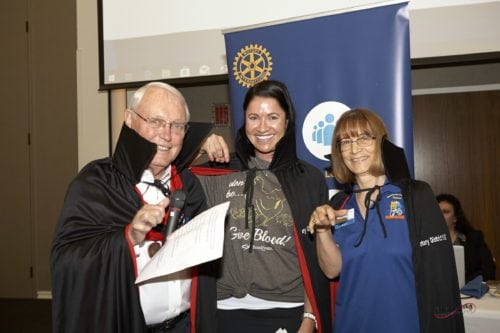 Past President Diane Mizell reported on the fundraising progress of the Sacramento Century fundraiser benefiting the Crisis Nursery Program at Sacramento Children’s Home. A parade of Rotarians responded to her appeal for contributions.

.  Loaves and Fishes – John Swentowsky (John Swentowsky Photography) announced that he needs volunteers to serve on August 30; and that our juggernaut softball team won yet again

. a Fireside chat with Diane the Magnificent will be hosted by Past President Dan McVeigh (Downey Brand LLP) in his newly remodeled house August 15, and just two slots remain

Celebrating good news with donations to the club were Dr. Judy Kjelstrom, who has a new grandson; and Steve Shiflett in honor of his 30th year in the club.

Dr. Nelsen, introduced by Past President Fred Teichert (Teichert Foundation), got emotional as he reflected on the promise of students and the role Sacramento State plays in their futures. Since he arrived four years ago, the school’s four-year graduation rate has doubled to 18 percent and continues to rise. Half of undergrads are now on track to finish in four years. 49 percent of Sacramento State students come from homes with incomes under $38,000, so scholarship support is critical; Dr. Nelsen is leading a major fundraising campaign to double scholarship dollars. Internship opportunities have mushroomed to nearly 6,000 each year, boosting students and employers while strengthening Sac State’s bond to the community. Dr. Nelsen outlined ambitious plans to engage the university deeply in the fabric of Sacramento because, as he said, it’s not just a college in this town. It’s Sacramento’s university.

Amanda Blackwood, new CEO of the Metro Chamber, will speak to the club at next week’s meeting.