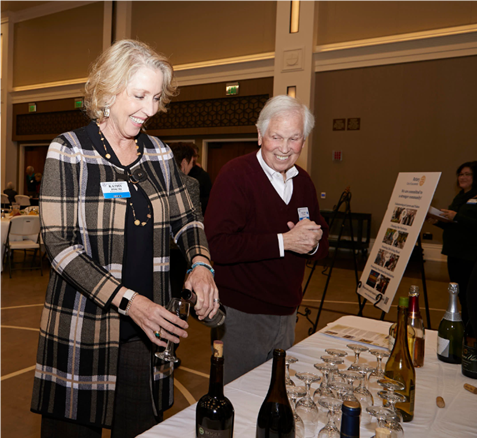 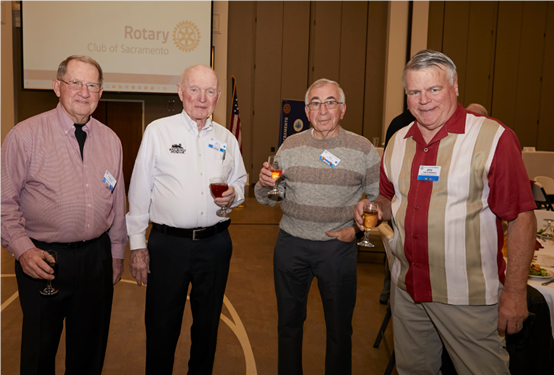 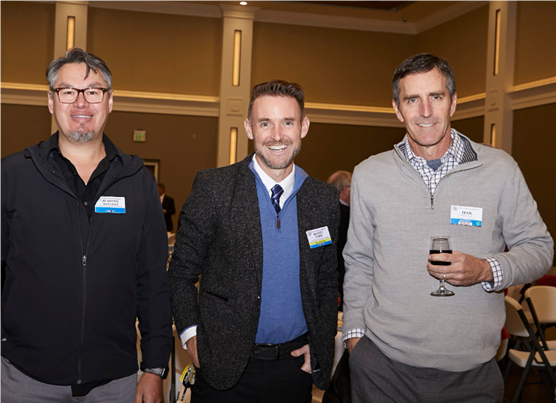 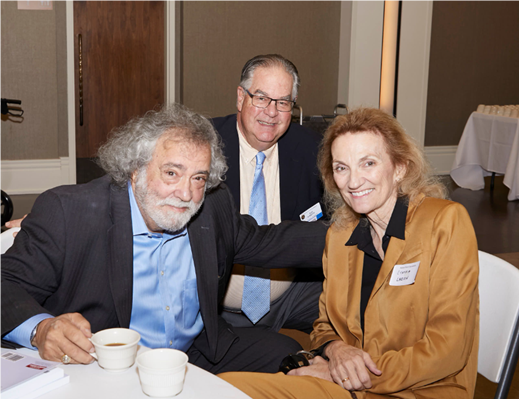 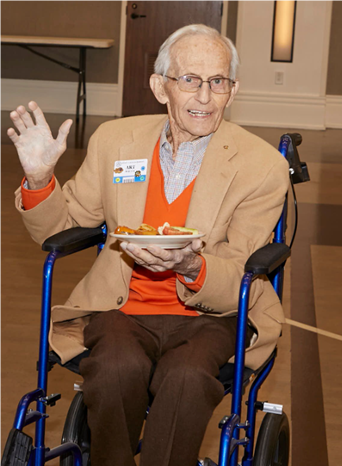 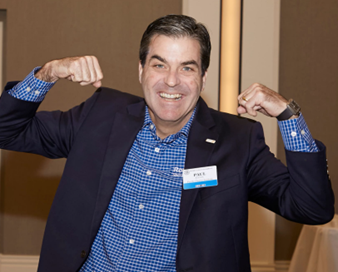 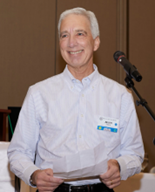 JOHN WOOD (McGee & Thielen Insurance Brokers) made us laugh with funny quotes from MARK TWAIN, GEORGE CARLIN, AND DAVE BERRY. Here’s an important one to remember from BERRY: “Never under any
“.circumstances take a sleeping pill and laxative on the same night
PRESIDENT LINDA GEERY (Gilbert CPAs) led everyone in the Pledge of Allegiance. The head table included meeting sponsor LARRY CASSIDY (Northern California Collection Service), GEERY, ED GOLDMAN (speaker), and Chair of the Day (THOM GILBERT, retired Gilbert CPAs).
INTRODUCTION OF GUESTS (By Sgt.-at-Arms Kathe Nathan)
MEETING SPONSOR
CASSIDY donated his time to Young Professional NIKKI WARDLAW (College Track), a nonprofit organization that mentors and assists 350 students in Sacramento through high school and college. One in five students from low-income communities who enroll in college do not graduate. Our Rotary Club’s Youth Incentive Program is partnering with College Track to mentor 17 students. Many of the students in College Track are the first in their families to attend college. 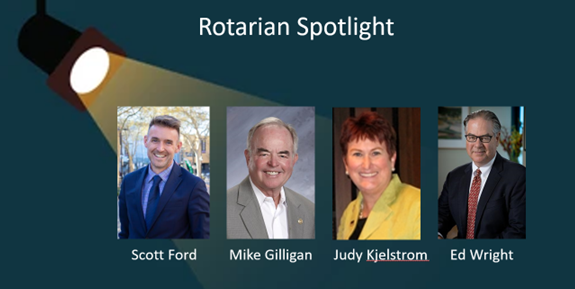 PAST-PRESIDENT DIANE WOODRUFF (Retired, Community Colleges) highlighted our members who have had recent birthdays. ED WRIGHT (Attorney, business litigation) has pioneered bringing Danish businesses to Sacramento. In fact, his wife DORTHE has been knighted to serve as an Honorary Consul of Denmark in Sacramento. WOODRUFF wondered if this made ED a royal consort.
MIKE GILLIGAN (CPA) has used his accounting skills in more than one role as treasurer for our club. In his spare time, he is an avid fly fisherman and claims to have successfully caught the same very large fish at two occasions. He stunned WOODRUFF with the confession that he was a stripper in college. No, not that kind, she said, but he stripped zinc from rock.
SCOTT FORD (Sacramento Downtown Partnership) used his business and art backgrounds to create a ten-foot red heart arch for Old Sacramento which has become quite the attraction. He’s also been a member of the Screen Actors Guild and starred in five commercials with the iconic KIM KARDASHIAN.
JUDY KJELSTROM (Bio Tech Program, U.C. Davis) was helped get a start on her career with two scholarships from Rotary clubs. When she retired as Director Emerita, she received the highest honor given by UC Davis. After she suffered a stroke and lost her vision in one eye, she volunteered for a clinical trial to have stem cells injected into her eye to aid her vision. The procedure was performed by one of her own former students. She’s also a proud member of the Hands Up for Hooters, who have raised $1 million for breast cancer research.
CLUB ANNOUNCEMENTS
PAST-PRESIDENT PETER DANNENFELSER (Architect) promoted Passions Day at our meeting on Jan. 31 when club members can share their interests with each other and it’s a reunion for all who have done so before.
JOHN SWENTOWSKY (Swentowsky Photography) needs more volunteers to serve meals at Loaves & Fishes and NIKKI WARDLAW (College Track) is seeking daughters to celebrate Daughters Day on Dec. 20. PAST-PRESIDENT JIM LEET (retired attorney) is collecting toys for the Salvation Army’s Christmas gift drive. Or you can donate cash and he will shop for you.
TODD KOOLAKIAN (Sacramento Children’s Home) shared news of a tour organized around Rotary International’s Convention in Melbourne, Australia, from May 19 to June 1, 2023. Contact him for information if you’re interested.
HONDURAS PROJECT PRESENTATION

CLAYTON LEE (Real Estate) and BOB ROSENBERG (Commercial Real Estate) updated our members on the ongoing international project to provide people in villages in Honduras with a safe water supply.
LEE working is working with the International Service Committee and World Vision to help the one million people in Honduras who do not have clean water to drink and for hygiene and sanitation.
It is a two-year project which will be sustained and maintained by Honduran Rotarians, who themselves are digging a 40-mile trench for the project.
THEY’RE GEMS FOR GIVING
Gifts were offered up for the water project by PRESIDENT-ELECT TODD KOOLAKIAN (Sacramento Children’s Home) in honor of his mother’s 70th birthday and her visit here for Thanksgiving and PRESIDENT LINDA GEERY added her contribution. PAST-PRESIDENT KEVIN SMITH-FAGAN (Fairytale Town) and JEFF STONE (Insurance) contributed in honor of this author and her husband PAST PRESIDENT FRED TEICHERT (Teichert Foundation) for providing a venue in our front yard for the Rotary Rockers to perform at the Run to Feed the Hungry. GARY BAZLEN (Nicholas Optical) also donated along with LEV KAGANOVICH (Construction Management). PAST-PRESIDENT BRIAN VAN CAMP (retired judge) bought a gem in honor of his long friendship with guest speaker ED GOLDMAN and the Bears win over Stanford. PAST-PRESIDENT JOHN SNYDER (Commercial Real Estate) and ELFRENA FORD (Financial planning) contributed to the water project as did KATHE NATHAN (Banking) in honor of her father who taught her about water conservation.
YOUTH PROTECTION

PATRICK FURLONG spoke on behalf of District 5180 concerning the updated youth protection policies. Every club will have a protection officer who will provide information on the vetting needed for volunteers working with children. He asked that in the interest of protecting children and the reputation or Rotary that members be aware of the issue. Our club’s youth protection officer is STEVE HEATH.
GUEST SPEAKER

PAST-PRESIDENT THOM GILBERT introduced guest speaker ED GOLDMAN, who has written more than 6,000 newspaper and magazine articles for the Sacramento Business Journal, Comstock’s Magazine and the Los Angeles Times. He’s also written five books, two plays and one musical. He has taught journalism and is eager to be a victim of a corporate takeover.
GOLDMAN, looking very dapper in a pin-striped suit, looked over our club and recollected he had interviewed many of us for his columns and been very kind in his coverage. He offered up one tip for interviewing people that can usually get them talking and that is asking them about someone who mentored them during their lives. That question can light up guests.
“Every one of us has a story to tell,” Goldman said. “If you ask people the right questions, they’ll open up to you.”
One of his comedy mentors, he said, was his mother. He described himself as a “not woke” New York Jewish Liberal but when he was young, he wanted to be a rabbi. When he was visiting his mother one time, her new rabbi asked him why he hadn’t become a rabbi. His mother quipped, “He didn’t want to work on Saturdays.”
GOLDMAN, whose longish hair is black with a few gray hairs that match his beard, authors a column called, “The Goldman State” which is subscribed on the internet by people in 32 states, Canada, and one in Italy. The Italian is a big fan and the sister of actor TOM HANKS, who used to live in Sacramento. He also has three books available on Amazon entitled: “Don’t Cry For Me, Ardent Reader: “More People, Places and Thingies from the Sacramento Business Journal,” “And Now, With Further Ado: More Gravitas-Defying Profiles and Punditry from the Sacramento Business Journal” and “But I Digress.” Who knows, maybe one of our Rotarians is included in one of those books.
When asked if he knew RUSH LIMBAUGH, Sacramento’s hometown radio announcer who went onto become famous nationwide, he said he had been on his radio show once. The station manager wanted to get a picture of GOLDMAN. LIMBAUGH had started to put on a little weight by that time, so Goldman asked, “Can I stand next to RUSH so I can look svelte?” LIMBAUGH heard about that comment and never spoke to him again, he said. 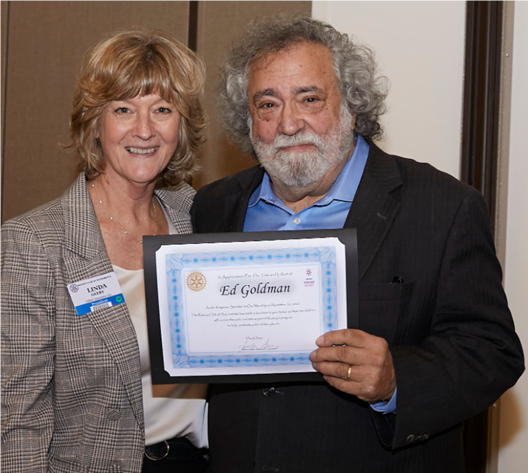 NEXT TUESDAY’S SPEAKER: He Arrested a Clown for Murder 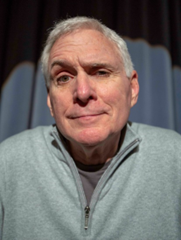 Our guest speaker on Tuesday, December 6th, is best known as a three-time Emmy award-winning actor and comedian. But 30 years ago, JACK GALLAGHER arrested Shakes the Clown for murdering Owen Cheese. (However, it was a false arrest. Binky the Clown was really the killer). JACK can explain all that, and more, Tuesday at noon at the Annunciation Greek Church. You won’t want to miss it, so be sure to watch for the emails from the club with the reservation link. It is important that members register, and include any guests they might be bringing, so that staff can give the caterers an accurate estimate of the number of meals to be prepared.
UPCOMING MEETINGS AT A GLANCE*
12/13/22 – RCOS Annual Meeting; guest speaker Cindy Nichol, Sacramento International Airport.
12/20/22 – Daughters’ Day
12/27/22 – No Meeting
1/3/23 – No meeting
1/10/23 – Highway Patrol Commissioner Amanda Ray
*Unless otherwise noted, all meetings are at the Annunciation Greek Church, 606 Alhambra Blvd.