ALLISON CAGLEY (Sergeant in Arms) (Executive Director of Friends of Sacramento Arts) welcomed our guest speaker, PROFESSOR MARY-BETH MOYLAN, as well as our newest Rotary member, NICOLE WILHELM (Co-Founder/Realtor of the Wilhelm Team at Compass). A warm and friendly welcome to both of you!

STEVE HUFFMAN presented the thought for the day, a few facts about initiatives and when they started as well as how they came to be. Believe it or not, initiatives go back to Georgia in 1777, their first state constitution permitted initiatives. However, it was not until progressive era in the early 20th century that initiatives took hold, beginning in Oregon in 1902. Thank you for the history lesson, STEVE!

CLICK HERE to view STEVE HUFFMAN’S thought for the day!

The Pledge of Allegiance was led by our newest member, NICOLE WILHELM. 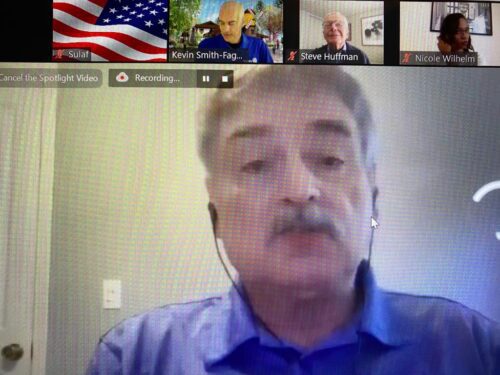 PAST PRESIDENT JIM LEET (Attorney of Boutin Jones, Inc.), our meeting sponsor for the day, brought up the Christmas committee consisting of BRUCE HESTER  and himself and their virtual efforts moving forward. Historically, the Christmas committee has provided toys during the club meetings in December but due to the pandemic we will likely not be able to continue that this year. However, since the need will be even greater this year, Rotary will be holding a Virtual Red Kettle and all money raised will be used in the community. We are currently ranked at number 53 on the team rankings, so let’s show our philanthropic attitude and get our number up, Rotarians!

PRESIDENT KEVIN SMITH-FAGAN (Executive Director of Fairytale Town) thanked everyone who attended the past Pints and Pinot with the President. If you missed the previous one and would like to meet with PRESIDENT KEVIN, you still have a chance! He will be holding Pints and Pinot with the President at Florez Bar and Grill on South Land Park Drive on Friday, October 30th at 4:30 PM. PRESIDENT KEVIN reminded everyone that this is not a gathering but simply a time and place where he will be where you can meet with him. 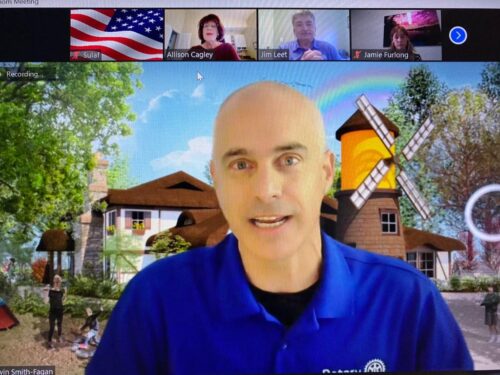 JAMIE FURLONG (Securitized Real Estate Specialist of Bangerter Financial Services) introduced our newest Rotary member, NICOLE WILHELM. NICOLE is transferring from the Oakland Rotary Club and her mother is also the President of a Rotary Club in the Philippines. She has a daughter named Olivia and is the owner of the real estate group that was founded with her husband, Michael. NICOLE also has a Masters in Marketing Communications and was featured on the show Extreme I Do’s for getting married on a volcano in Hawaii. The Network Group, the Wilhelm Team, and East Bay Advisors are ranked #1 in California and #3 in the nation. NICOLE has a natural passion to create a better world for the future and we look forward to seeing you use that passion in Rotary. Welcome, NICOLE, and thank you for joining our club! 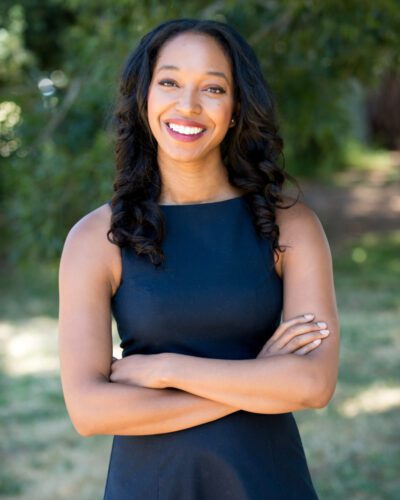 RICK DAVIS donated $100 to kick off Rotary’s Virtual Red Kettle, a great start to a great cause. Thank you, RICK!

PAST PRESIDENT PETER DANNENFELSER II shared that him and his wife spent 10 days up in Lake Tahoe celebrating their 20th wedding anniversary. PETER met his wife on a blind date setup by JEAN RUNYON, the first woman to join Rotary of Sacramento. PETER is also on the board of directors for Fairytale Town as well as the sub-committee for Adventure Playground. Earlier this October, 150 kids ran through an obstacle course, which included a mud pit that he helped build. In honor of both of these achievements, PETER has donated $100 towards Rotary’s Virtual Red Kettle and $100 towards Polio Plus. Congratulations to you and your wife, PETER! Thank you for both your donations and we wish you many more happy anniversaries.

PAST PRESIDENT WESLEY YEE (DDS of Yee Dental Care) donated $250 in honor of his new grandson, WESTLEY, who was born 10 days prior to the day of the meeting. Congratulations on becoming a grandparent and thank you for your donation, WESLEY!

KERRY WOOD (Chief Marketing & Donor Engagement Officer of Sacramento Region Community Foundation) contributed $100 in honor of becoming the newest member of the Rotary board of directors. Congratulations, KERRY! Your donation of your time for the board and this current donation are both greatly appreciated.

JOHN MCINTYRE (Chair for the Day) (Chief Philanthropy Officer of Mercy Foundation) introduced our guest speaker, PROFESSOR MARY-BETH MOYLAN. PROFESSOR MOYLAN is the Associate Dean for Academic Affairs and Experiential Learning and Professor of Lawyering Skills at McGeorge School of Law. Besides having a long and extraordinary professional title, PROFESSOR MOYLAN also has a depth and breadth of legal and electoral knowledge that is deeply impressive. 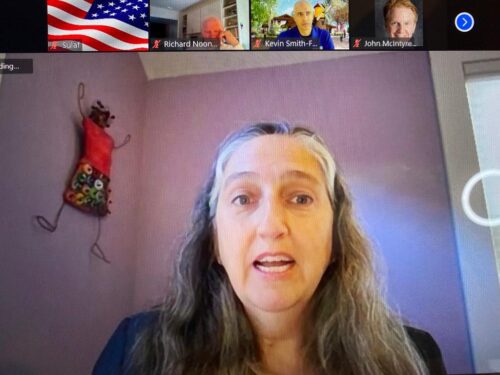 PROFESSOR MOYLAN thanked STEVE HUFFMAN for his thought for the day as she was also going to mention the initiatives and some history about them. PROFESSOR MOYLAN stated it is good to have a conversation to know what you are voting on. She proceeded to give a quick snapshot of the propositions we are currently facing.

This is a split-role initiative that would leave Proposition 13 alone with respect to residential properties, but would change the formula for taxes on commercial properties. This would cause commercial properties to move to a fair market value instead of an acquired value assessment when looking at what the property tax will be. There are concerns that this will be harmful to small businesses but really only applies to properties that are valued at $3 million or more. The idea is that increased tax revenue will be targeted for schools and community projects such as housing and parks and recreation.

PROFESSOR MOYLAN mentioned that Propositions 16, 17, 18, and 19 are constitutional amendments placed on the ballot by the legislature and are not direct initiatives through the people.

This was originally proposed by a direct initiative in 2018 but failed. It would allow property tax transfer for homeowners 55 or over that are severely disabled or victims of natural disasters to transfer their property tax base to a new home that they purchase. This would work for homes of greater or lesser value. The revenues from this would go towards fire fighter funds as well as fire protection funds.

PROFESSOR MOYLAN paused to say that these and all future initiatives should not embrace more than one subject, but most of these initiatives seem to stretch that fact.

This Proposition is brought to us by Propositions 47 and 57 as attempts to make some changes to parole considerations for individuals that are convicted of certain types of crimes. It would require DNA collection for some misdemeanors for crimes that were previously felonies but now are characterized as misdemeanors. This Proposition also adds some additional new crimes such as organized retail theft and serial retail theft. It is a criminal justice reform measure, but it is attempting to tighten up some things that some feel may have some loose ends.

This is the Rental Affordability Act and is a different version of an attempt to allow local governments to allow rent control ordinances.

This is the “you die either way” initiative. It is called so due to both the vote yes and vote no ads showing that someone dying by the end of the ad. This Proposition would require that a physician be on-call around the clock for each dialysis center. The CDC would then have to spend more to have a physician present and on-call.

This is the California Privacy Rights Act that would make changes to existing privacy laws. California currently has fairly stringent privacy laws but not as strict as Europe which has the strongest privacy laws. This is a very complicated initiative and PROFESSOR MOYLAN encourages you to read the entire report to understand the issue better.

This is a referendum that is tricky. The proponents of the referendum want you to vote no, the opponents of the referendum want you to vote yes. The question on the ballot is, do you want this law that the legislature has already passed. If you want the law that legislature passed, then vote yes. If you do not, then vote no. This law proposes that cash bail should be out and risk assessment should be in for our bail systems and structures.

PRESIDENT KEVIN and all Rotarians thank PROFESSOR MOYLAN for joining us today and for her explanation of each initiative. It was highly informative, and we hope you join us again, PROFESSOR MARY-BETH MOYLAN!

Tune in at the same time, same place next week for our next guest speaker DR. LINDSAY CHERVINSKY. DR. CHERVINSKY is a historian of Early America, the presidency, and the government — especially the president’s cabinet. She shares her research by writing everything from op-eds to books, speaking on podcasts and other media, and teaching every kind of audience. On her site, you’ll learn more about DR. CHERVINSKY and her work, especially her recent book, The Cabinet: George Washington and the Creation of an American Institution. 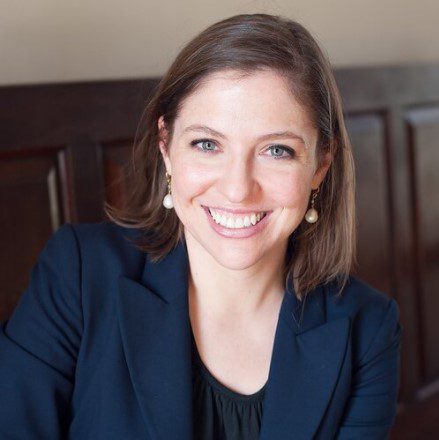